Last weekend I got to do something I haven’t done in a few years–I went to see The Nutcracker! It was so much fun–when I was a kid we used to go every year, and I got a new Christmas party dress to wear to the performance. It was wonderful to see all the little girls in their pretty clothes, so excited to see the dancing and the sparkling lights. 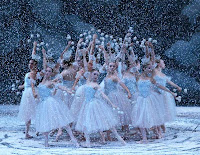 It’s funny that something that’s become such an intrinsic part of the holiday season was a bit of a flop when it first opened! It started out promising. After the great success of The Sleeping Beauty in 1890, the director of the Imperial Theater in St. Petersburg asked Tchaikovsky and choreographer Marius Petipa to collaborate on another production, one based on ETA Hoffmann’s story The Nutcracker and the Mouse King. It turned out to be not a very harmonious partnership–Petipa sent Tchaikovsky very detailed instructions for each number in the ballet, right down to tempo and number of bars, and Tchaikovsky didn’t like working under such restraints. The production was further delayed by Tchaikovsky’s visit to the US and Petipa’s illness, but it did open at the Mariinsky Theater on December 18, 1892 in a version much condensed from the original story (there are only two acts, the first act the Christmas party and battle of the Mouse King where Clara helps save the Nutcracker Prince, and act two at the Kingdom of Sweets where we meet chocolate, coffee, marzipan, snowflakes and Sugar Plum Fairies…)

The first production got decidedly mixed reviews in a town that was very, very picky when it came to their ballet. One reviewer called the Sugar Plum Fairy “pudgy” and one complained about how confusing the Mouse King battle was (“One cannot understand anything. Disorderly pushing about from corner to corner and running backwards and forwards–quite amateurish”). It didn’t take off, though Tchaikovsky did have some success with a suite of the music.

Its first complete performance outside Russia was in England in 1934, and the first US performance at the San Francisco Ballet on December 24, 1944. The New York City Ballet debuted their version in 1954, which is when it really started to become the big money-maker it is now and a cherished tradition for many families like mine (most ballet companies function all year from the proceeds from their Nutcracker performances!)

For more information on the history of the ballet, I really like J. Fisher’s book Nutcracker Nation: How An Old World Ballet Became a Christmas Tradition in the New World (2003)
Do you go to see The Nutcracker? What are your favorite memories of the ballet??

I’ve seen it a few times, from local amateur productions and twice with the Cleveland Ballet. I do love it. I think my favorite bit of music is the Sugar Plum Fairy’s theme. So magical.

Ah, the New York Ballet’s Nutcracker. I remember seeing it one time with Edward Villela, and his spectacular leap off stage. So help me, he was still rising in the air when he disappeared behind the wings.

But best of all was a little girl, no more than five or six, at intermission. She ran down the hall, did a beautiful leap of her own, arms circling her head, and then continued on her way without the slightest bit of self-consciousness.

I love that story, Lil! I feel like dancing after watching the Nutcracker, too.

I was privileged to see Barishnikov dance the Nutcracker! http://youtu.be/P6NCE9GlU7s

I think Ovation is playing three versions of the Nutcracker again this year.

Amanda, I went to see the Nutcracker on Sunday when I was in London, danced by the English National Ballet at the London Coliseum. I normally go see NYCB, but since I was abroad, I thought I would see a completely new version to me. It’s amazing the many different ways this ballet can be interpreted. Ovation does the Battle of the Nutcrackers where they play about 15 diffferent versions over the holidays.

Amanda, do you know who first came up with the idea of having Clara played by an adult?

Cara, according to “Nutcracker Nation” it was Alexander Gorsky in 1919–the version I saw last week had Clara danced by an adult, but she was such a tiny ballerina you almost couldn’t tell 🙂

Elizabeth, I wish I was in London right now too!!! I bet it is magical at this time of year…

I’ve just watched the NY City Ballet production on PBS, but my favorite is the San Francisco Ballet version PBS presented last year. I also caught a bit of Matthew Bourne’s version tonight (this is the choreographer who did the brilliant all-male Swan Lake) and it was wild and wacky but the commercial interruptions were very poorly placed and far too long. So I’m getting a lot of Nutcracker this xmas, but sadly no live performance.

When our children were smaller, we went to see it every few years. Now, not so often. I have a new granddaughter and look forward to her being old enough to take and enjoy with her.

Have a wonderful Christmas and a great 2012.

My niece studied ballet for years. The Washington Ballet used the students for the children in the party scenes, and so we went to see her, starting with the year she was a mouse. The Washington Ballet sets its Nutcracker in Georgetown, one of the oldest parts of DC. George Washington is the Nutcracker, and historical figures like Frederick Douglass are guests. Also the settings for some of the dances are local, e.g. cherry blossoms and Anacostia Indians. It’s great fun. Now that my niece is no longer a dancer, we don’t go and I miss it.