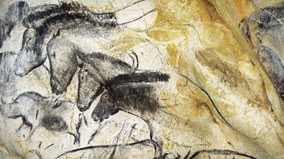 Like Carolyn I too am on deadline with a Jan 1 deadline, but it’s a rewrite. Piece of cake. I hope. So, fab things I have read and seen this year.

I saw three movies this year but they were all winners. One was the Jane Eyre and I blogged about that here. The other was Bridesmaids, which had so wisdom and insight on female friendships. The other, which I caught last week, was Cave of Forgotten Dreams, a documentary about some amazing cave art in Chauvet, France. It was made in 3D which I imagine is spectacular although I saw it on normal format. The paintings are the oldest ever found–35,000 years old–in a beautiful “crystal cathedral” (to quote director Werner Herzog) of limestone. There is no public access and scientists visit only for four hour stretches. There is one part of the cave that has so much CO2 from tree roots that it’s dangerous to stay in too long and access throughout is limited to boardwalks created to protect the environment. The movie is available on Netflix where I found it.

And on to books. I acquired a kindle this year and, gawd, I have never read, or started to read, so many bad books in my life, but I won’t talk about those. I do find the lure of the free, $1.99, and kindle daily deal irresistible. For the first time in my life I have a TBR (digital) pile.

One book I didn’t buy for the kindle–some books just won’t work, particularly books with pix–was Adam Hochschild’s brilliant To End All Wars, about World War I. For me, it gave some entirely different perspectives on the war, particularly what was happening at home in England, where the authorities were terrified of revolution.

I said I wouldn’t talk about books I didn’t like (I have some discretion) but the much-vaunted and revered Death Comes To Pemberley by P.D. James sucks a major one, as we literary critics say. This article in the Guardian says it all–warning, contains spoilers, but the book is so poorly written you know who’s

done it almost immediately. I would however recommend The Mysterious Death of Miss Austen by Lindsay Ashford who I met very briefly at the JASNA conference last October. It’s moving, sexy, and beautifully written. At the moment it’s really only available on kindle or from the ever-faithful bookdepository.com. Another writer I met at the conference was the lovely Syrie James (you should have seen her outfits!) whose non-Austen book Nocturne I also recommend–nothing to do with Austen, but one of the best vampire love stories I’ve read, and one which is smart enough to tackle the outcome of a mortal/immortal’s future together.

I also loved this collection of short stories by Laura Lippmann, Hardly Knew Her, a kindle bargain. Most of them are set in Baltimore or Washington, and several are about a high class hooker who maintains the identity of an upperclass suburban mom. Fascinating stuff.

At the moment I’m reading Laura Miller’s The Magician’s Book: A Skeptic’s Adventures in Narnia, which has some wonderful things to say about reading (and by extension about writing). It’s a book that absolutely resonates with me as I too loved the Narnia books (apart from The Last Battle) as a kid, and have returned to them at different stages of my life.

But what about romance? Okay, okay. Miranda Neville’s funny, sexy, smart The Amorous Adventures of Celia Seaton. (Refers to kindle.) Cafe du Hour by Lilian Darcy, Liberation of Alice Love by Abby McDonald, Tongues of Serpents by Naomi Novik (not technically a romance but I’ve always loved the Lawrence/Temeraire dynamic), and I finally got around to reading Lord of Scoundrels by Loretta Chase which to my surprise I liked.

Have you read any of these? What were your favorite 2011 reads?

There are a few more for my Wish List here. Several I had read reviews already. The movie will be one I look for.
As for books that are keepers for this year, Jennifer Blake’s THE MASTERS AT ARMS series was at the top of my list. The research she did showed in the little details and the overall connection of events in history. These books are set in 1840’s and were really good

Just too many to choose from, some of my favourite reads this year were;

I was late to the party on all of these but I am so glad I read them.

New Authors Ashley March and Theresa Romain, as well as some new books by autobuy favourites Gaelen Foley, Anne Gracie, Loretta Chase and Liz Carlyle. I’m sure there are more but I can’t remember them all. It was a great year for reading and there are some fabulous books coming up in 2012.

Great choices, Janet, and I can’t wait to queue up Cave of Forgotten Dreams on Netflix. My favorites this year? In film, of course, Jane Eyre, the last Harry Potter film (*sniff*), Sherlock Holmes. Oh! And finally catching up on Downton Abbey, straight to the Christmas special *SQUEE*.

In books (romance), Julie Ann Long’s What I Did for a Duke because she’s got the best of both worlds: writerly prose & storytelling skills to boot. YA, Barry Lyga’s Boy Toy because, wow… I seriously couldn’t put it down, though I wouldn’t hand it off to my teenager. Just sayin’. Non-fiction, Jennifer Lowe-Anker’s Forget Me Not: A Memoir. This one surprised me, because I’m not normally keen on memoirs, but like you mentioned, Janet, I’m a sucker for the Kindle daily deal and it was a buck-99, so I said, “Why not?” The author, an artist, recollects her time with her husband, a mountaineer, who died tragically. She goes through putting her family back together, building a life, and finding love again. Great, simple read.

I’m back from Williamsburg, trying to get back to normal…

Great list, as ever, Janet. I’m going to queue up The Cave Of Forgotten Dreams, too!!

Beebs, Anne Gracie will be our guest Jan 8!!!

LOL…thanks for the warning on the James book :))

Somehow I missed your review of the new Jane Eyre. I didn’t get to go and some people I know were disappointed, but now I must add it to my Netflix. Also Cave of Forgotten Dreams. That sounds fascinating!