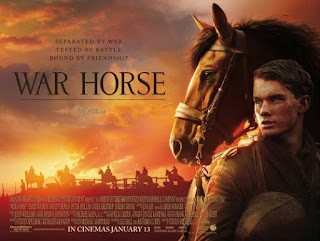 When I first saw the trailer for War Horse, I immediately said, “I want to see that movie!”

I knew I’d love a movie about a boy and his horse, separated by World War I. I’d heard that it would tug on one’s heartstrings and that it would have you on the edge of your seat, wondering if it would end like Old Yeller. But as a child I loved National Velvet and Black Beauty and the Black Stallion. I even loved The Incredible Journey, about a cat and two dogs who have to find their way back home.

This weekend I did see the movie and I loved it.

I don’t want to give any spoilers, except to say it was an emotional movie, but it won’t leave you devastated at the end.

The horse–or horses, because there were several who played the title role–were spectacular. You always knew what the horse was thinking and feeling, although the animal was never anthropomorphized. All the acting was suburb. Jeremy Irvine, the new actor who plays Albert, the horse’s owner, is absolutely appealing. He’s a young man with a great future, I predict.

I’m a sucker for battle scenes and this movie has a wonderful cavalry sequence that will certainly inspire my writing.

Another thing that I considered important for my writing was that the characters in the movie were complex. There were no outright villains, and even the tough German sergeant warned his soldier never to name the horses–because they were basically worked to death. There were also breaks in the action, relief in the emotionality of the movie. The temporary truce between the British soldiers and the Germans was a great scene.

But the best scene was when the horse finally runs from the war, runs over a tank, and through the fighting. You see bits of this scene in the Trailer.

Have you seen War Horse? What did you think of the movie?
What other movies have you seen lately?

Our guest next Sunday, Jan 8, is the incomparable Anne Gracie, who will be talking about her January release, Bride By Mistake.

I have also seen War Horse I thought it was good, but being a horse owner and lover there were many cringe worthy moments. Happy New Year!!

Kat, it was hard for my husband to sit through. He can’t bear seeing animals suffering, so I can imagine what it must have felt like to a horse lover!

I thought it was an amazing movie, Diane! I wouldn’t call it flawless — there was a certain sunset (sunrise?) scene near the end where I had bad flashbacks of the colorized part in South Pacific (it just looked so old-fashioned and hokey) — but I found 95% of it to be stunning.

And I knew going in that it wouldn’t be a happy movie — I mean, you just can’t make a happy movie out of World War I — but it was much more hopeful and uncynical than most WWI entries…I think because of the horse. The horse brought out humanity in most of the characters.

I would like to see this since I’ve heard such great things about it, but (SPOILER REQUEST!)…does it end okay???

My CP saw the play in New York during RWA Nationals. She found the play beautifully done, but very sad. I have a feeling the movie will be better. I too am a huge sucker for animals films – especially the horsey ones! I’m looking forward to seeing this one.

Cara! Happy New Year!
I did a lot of reading about the movie after I saw it and apparently that sunset at the end was real.

Amanda, I don’t want to spoil the movie. but it did end okay…

Louisa, this will be a tough one for you. I know how you love horses.

WAR HORSE is on my list of movies I really want to see. The last movie I went to was HARRY POTTER AND THE DEATHLY HALLOWS: PART I. I have part 2 sitting here, but have not yet watched it.
I am certain my husband will want to see it, so maybe this week or next we can go. I always wait too long and by the time I decide to go, the movie is no longer in theaters.

Many people have asked it I’m going to see it, seeing as how I’ve been horse mad all my life, including owning a horse. My reply is always the same: No. I had a tough time watching ROTK and the last battle, and that was all CG in a make-believe story. This is WWI. I have trouble making it through the clip, because I know that even if the “hero” horse survives, many others did not. Not to mention the horses that were taken from families to mount the soldiers. Can’t do it. Won’t do it. But very glad you enjoyed it.

Ah, Judy. I do sympathize. It is a very emotional movie. But it is difficult to see the horses suffering.

Librarypat, I loved the movie and would see it again. I hope you don’t miss it!

Saw the play in London. The staging is amazing, as the characters of the horses (and a comical goose) come fully alive even though they are essentially life-size puppets (3 people per horse). Michael Morpurgo wrote the book the play (and now the movie) was based on. IIRC, something like 90% of the horses used in WWI died. Morpurgo was appalled and wanted to tell their story. The movie is definitely on my list of movies to be seen.

Horsie was my first word, (it came out ‘sissy’), and I’ve loved them ever since. Especially my mare I had, Giselle. I appreciate a Black Beauty-like, anti-war story, and I bet it made a fantastic stage play. But I just can’t go, besides, I’m still scarred from Marley and Me.

Susan DC, I saw the YouTube clips of the stage play. What amazing effects!

Jane George, it does seem that horse lovers can’t think about seeing the movie.

I just saw it reviewed by movie critics for WETA, our PBS station – three men who seemed to think the emotionality of the film was a cliche. I didn’t feel that at all.

Some members of my family (including a nine year old who loves horses) wanted us all to see War Horse on Christmas Day. They said it was mostly about the boy and his horse and not about the war.

From what you’ve written, it was probably good we saw the Muppets instead. It was fun and nostalgic and we were all singing “Manamana” on the way home and thinking of present day entertainers we’d like to see if they revived the Muppet Show.

We saw Tintin this weekend and enjoyed it. Very creative and fun.

Elena, if your girls love a very emotional story, one that is guaranteed to make you cry, then War Horse would be okay for them. If they are easily disturbed by strong emotions, then maybe not. It does end positively.

In any event, The Muppet Movie sounds like a great Christmas Day outing!!!

We saw Hugo on Christmas day. I loved every minute of it!

Diane, thanks for giving a good account of War Horse. Now, I know more about it without needing a tissue, lol.

@Diane Gaston, happy new year! I thought War Horse was amazing. The way these horses have acted is beyond anything I could’ve ever imagined. The entire cast was very good, too.

@Cara, I totally agree with the last scene of yellow colored sunset. It totally spoiled the ending for me. I wanted it muted not sharply (and comically) delineated.

I truly did not mind the ending. I thought it was beautiful. But I suppose movies are made for people like me. Get me emotionally involved and I’m ready to accept the whole thing, hook, line and sinker!