As usual I’m about a week late with everything but I’ve been thinking a bit about new year’s resolutions. If I make them, which I don’t, it’s something like:

All of which are pretty basic and ongoing. So what do I anticipate happening in 2012? First, I have Dedication coming out from Loose-Id, a rewritten version because everyone complained about the breakneck ending and with more sex, although the original had quite a lot. It was originally published as a trad Regency by Signet in 2005 and astonishingly had two bondage scenes and some fairly grown up sort of sex–well, what did they have to lose?–the line was ending.

I also have some self-pubbed projects in mind although you can pretty much count on the bottom falling out of the self-pub industry as soon as I come on board. More about those later… 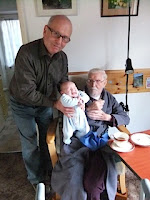 I was thinking that traditionally the old year/new year is represented by extremes of youth and age, so here’s a picture that does just that. My father, who is heading for 101, my brother, and a very new baby that belongs to a neighbor’s daughter. My father didn’t eat the baby although he looks as though he’s going to. I love this pic because I don’t think I’ve ever seen a photograph before (and certainly not in my family although we’re not big photo takers) which includes two people a century apart in age.

So happy new year everyone. If you’re planning new year’s resolutions, good luck with them.

Great photo of your dad, brother and the baby and I agree..that’s pretty neat to have a photo representing the age difference.

“I also have some self-pubbed projects in mind although you can pretty much count on the bottom falling out of the self-pub industry as soon as I come on board. More about those later…”

Janet Mullany, AKA The Cooler.

That’s too funny even if totally untrue.

And that’s a wonderful picture of The Tree.

Who knows, Janet? Maybe you will break with tradition and make buckets of money self-pubbing!

I remember once being out with my husband’s grandmother, his mother, and my daughter, who was very little at the time. Four generations! It was pretty special.

I AM the Cooler. Almost every line I’ve written for has disappeared. But I hope Diane is right!

I have no doubt that Janet will do very, very well on her own and lend self-pubbing an air of authorial mastery while she’s at it.

I don’t really make specific resolutions, other than to just try and do better. I have to be successful somewhere with that.

Hope your projects this year are all successful. Have a great 2012.

I don’t make resolutions per se, but I still get the feeling of a new start because of getting back to normal eating & exercise after the disruption of holidays and travel. Mostly it’s the same stuff. This year I’ve also got an intention to be kinder to myself, more forgiving if I don’t reach every goal.

I love that picture, Janet! I look forward to seeing what you’ve done with Dedication.

Looking forward to reading your new projects, Janet! It will help me save on my heating bills! LOL

And that photo of your Dad is amazing. The idea of a 100 year difference in ages is mind-boggling.

And you will definitely lend an air of class and skill to the ranks of the self-published !!