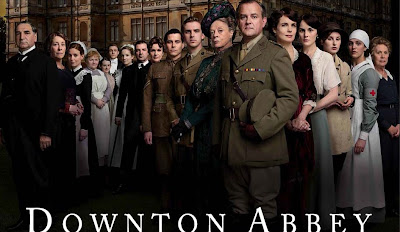 “What’s that new building next to Downton Abbey? The proportions are off, the materials look cheap–is it prefab? Oh: It’s season 2.”

Our own Janet is less enamored of the series than I am. But I must say, I enjoyed the first episode of Season 2. The obvious reason (besides the beautiful settings and fashions, which do not disappoint!) is to find out what will happen to Lady Mary and Matthew, Bates and Anna, but one thing I particularly liked about this episode was the way the writers threw more complexity into the characters.

For example, I didn’t have much sympathy for Thomas in Season 1. He was a pretty thorough villain, but in this episode, we see another side of him, something of his personal pain. Same for O’Brien. For both Thomas and O’Brien, it was a glimpse of their personal pain that captured my interest, as well as a kindness in them that had not been evident before.

So, building from Megan’s blog of last Friday, about sexual tension between romantic characters, I realized that there were other elements of story that hook me. Show me the character’s pain. Show me a glimpse of their good side and suddenly I care and I want to know what happens to them, whether it be in a movie, a mini-series, a soap opera, or a book.

What about for you? What hooks you into a story? Have you ever been hooked on a show or a book series that you’d reluctantly confess to even your closest friends?

What did you think of the first episode of Downton Abbey?

I’ll announce Anne Gracie‘s winner after midnight today! So keep your comments coming on her guest blog, as well.

I didn’t get to watch last night’s premier but thank God for DVR. I’ve got that baby saved and waiting for me 🙂

I’m very curious to see this “other side” of Thomas and O’Brien that you speak of, haha.

I watched the season back in November after receiving the DVD. I much prefer the 2nd season for the very reasons that you named Diane, more complexity to the characters. Plus the sexual tension between Bates & Anna, and Matthew & Mary. I also think the addition of the war added a great deal to the series, gave it more of a purpose.

I’m trying not to give spoilers, Isalys. Don’t want to spoil it for people like you.

Elizabeth, I’m envious. You know what is going to happen!!!

I had so much fun watching last night!! My head is still spinning from all that happened so quickly 🙂

Watched it when it aired her in November. No spoilers but it just gets better and the Christmas special…. sigh!

I have only watched one episode and that was in Season I. For some reason we are always doing or watching something else when it comes on. We enjoyed the one episode se did watch. Maybe I can get it on DVD.