I’ve been wondering whether to blog about this or not but on the other hand it’s been on my mind. Two weeks ago I showed you a picture of two people a century apart in age, one of whom was my father. He died very peacefully last Sunday after living rather too long and with increasing mental and physical frailty. I saw him last in 2010 and he didn’t really know who I was but accepted cups of tea from me, some of which he said were lousy. Sorry, dad.

Think about it: a hundred years. His mother, at the time of the 1901 census, was 20 and a housemaid in London (possibly a family secret I unearthed) at 28 Alma Square in Marylebone, London, something I now incorporate into my presentation on Regency servants. The house is still there (thanks, google maps, although I don’t know which one it is! It is now a VERY posh area. I don’t think it was in 1901). There’s a lot I don’t know about his family because he wouldn’t volunteer information or talk about them, and he’s the last of his generation by a long shot. He was of Irish descent and his grandfather (who came over from Dublin) drove a hansom cab in London. When he was a very small child he was put on a train to visit relatives and was given chocolate to cheer him up by young soldiers who were going to the front in World War I. 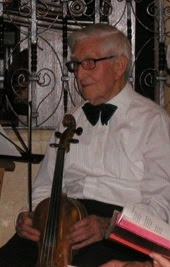 He gave me my appreciation of music and books. I thought everyone went to sleep listening to their father play violin accompanied by their mother on piano. Wrong. Here he is in a local community orchestra, as a youngster of 92, playing that most geeky of instruments, the viola.

He and I had a very nice Jane Austen moment one time when I was a rebellious teenager and we weren’t getting along too well. Somehow we got onto Jane Austen, and I said I liked Emma best and he said he liked P&P, particularly the smackdown scene between Lizzie and Lady Catherine de Bourgh, and we then read it together. I’m trying to think of a way to incorporate this into the funeral service at the end of this month. And if I ever need to think of the way a Regency person would say something, I recall my father’s way of speaking, which had a very old-fashioned cadence. So I owe him a lot.

He read my first book, Dedication, but by then his memory was already going and he had trouble connecting thoughts. He did however comment that he’d be too embarrassed to donate the book to the church jumble sale.

We had some memorable moments when he and my mother visited the States a couple of decades ago. He may have been the only person ever to take a mule ride in the Grand Canyon wearing a necktie (he didn’t feel properly dressed without one). And he was thrilled to find a “Sod and Sodding Services” section in the yellow pages. English people used the term “turf.” Over there, “sod” and “sodding” mean … something else. I cut it out for him and he took it back home to show people.

It’s the end of an era. I’m sad he’s gone but when someone lives this long you have expected it for a long, long time. So don’t feel bad for me, but do tell me about any interesting ancestors you may have!

It sounds like he lived a very full and enjoyable life. Such lives should be celebrated, not grieved for.

I have several ancestors who stand out, including a 16th century Catholic bishop (the last in Iceland before the Reformation and a true ‘father of the nation’ because most Icelanders can trace their lineage back to him), a 19th century shipwrecked Breton fisherman, and a male midwife and homeopath who delivered hundreds of children and made business for himself – he had 33 children.

He sounds like a wonderful man and a great role model for you. My father died quite unexpectedly in his 50’s and I still miss him. Like you, I thought it was quite normal to be sat on his knee and told to listen carefully while he played Handel’s Messiah or Gregorian plain chant on the record player. 🙂

This is a moving, and funny, tribute. What a long life well-lived, Janet. I’m sorry that you’re without him, but I hope he makes it into some of your wonderful books in one form or another.

Oh, Janet! I am so so sorry. When a parent lives so long you rather expect them to be there always. Your tribute to him here is very loving. I’m moved by it.

I love the Jane Austen moment the two of you shared!

When my great great great grandfather put his family on a ship from Alsace Loraine to America, there was a huge storm. He prayed to the Virgin Mary to spare his family and in return he would build her a church. He did it, too. It is a chapel outside of Buffalo, NY, still in use.

May you always hear his viola and the cadence of his voice!

Oh, and I’m a direct descendant of Cotton Mather, on my mother’s side…

@Kate, how lucky we were!

@Steph, now he’s gone I can certainly write about him. No problem.

@Diane Gaston, how wonderful to have a building connected to your family.

@Jane, I think the viola is a lovely instrument in the right hands. Like most musicians of his generation, he started on violin and took up viola at the tender age of 70 or so, around the time my mother started playing the cello. Thus they became half of a string quartet.

However much you expect the event, it is always hard when it comes. your tribute shows how much you love him – and he you when it mattered, before he became frail.

I’m 72 and just realized the other day that when I die, there won’t be anyone left who had heard the voice of my cousin. I thought he was very glamorous in his flying gear and remember sitting on his lap as he told me about his training plane. He was 21 when he was shot down over France during WWII.

We lost my grandmother this year. I was always fascinated by her stories of working on the planes during the war and how she met my grandfather. He was an inspector. He always claimed she dropped a drill on his head and he woke up married.

MizWaller, yours made me tear up a bit.

Janet, I’m sorry you lost your father, inevitable though it may have been, but I’m glad you have lovely memories.

Dear Janet, my deepest condolences to you and yours on your loss. As long as you carry all of those memories in your mind and in your heart, he will always be with you. He had a wonderful life and you were most fortunate to share it with him. This was a wonderful tribute to him and to your love for him. God Bless.

The way my Father’s health is I expect a phone call, sooner rather than later.

Oh, Janet. My sincere condolences for your loss; your father looks like an interesting, amazing man. And what a full life he lived! Wow! To be able to speak to your father about Jane Austen? I cannot imagine.

Sad to say, I don’t know very much about my ancestors, other than my great grandfather, who also nearly lived to see 100. When he was still an infant, his parents immigrated to the States from Ireland–Galway, to be exact; that, we do know–but, once here, they couldn’t afford to care for him. So, they left their tiny little man on the doorstep of another Irish family.

I think I felt the same way when my grandmother died at 83, from a heart condition that usually kills by 60. It was sad, but there was much to celebrate in her life.

She was a strong woman whose mother died young, leaving her to run a farm household and raise her many siblings. She brought her family over from Lithuania during WWII, nursing my uncle through pneumonia in a DP camp. When they got to America she worked hard to make sure all her children, including the girls, went to college. We grandchildren knew her as one who loved to cook and bake for us and in whom we could safely confide any of our troubles. She was a devout Catholic but simple in her practice. She prayed on the rosary every day and believed everyone she met was a child of God, to be treated with kindness.

What a lovely tribute, and what lovely memories you have of him.

And I have to say, the viola is my favortie of the strings. First time I heard one as a main/solo (I think it was a Hayden piece) I was floored.

Thanks for all your nice comments. @Isobel Carr, I wonder if that piece you liked so much was Mozart, another geeky violist.

Late stopping by, Janet, but I do want to offer my condolences on your loss and my admiration for your tribute to your father. We usually discover far later than we wished what unique and fascinating people our parents are. When we are young we tend to see them strictly as “PARENTS,” a species unto themselves. Only as we mature do we realize they are people with hopes, dreams and quirks of their own.

Lost my Dad when he was 64, far too young for him and for me. He grew up in a coal mining family in Pennsylvania where he heard Welsh spoken every day as his maternal grandmother lived with them. His ancestry was three quarters Welsh and one quarter English and they all migrated to the US in 1892. His grandfather, Griffin Hughes,died in a mining accident at the age of 36 and left his wife to raise nine children alone. She was, from all accounts a tough little woman who ran her home with an iron hand.

My Mom is half Cherokee and half Creek. Two tribes who NEVER got along, and apparently my grandparents continued the tradition. My Great Aunt Icie was quite a character and made her living as a seamstress. She was best known for her custom drapes and had people from as far away as New Orleans come to Montgomery to commission her to make drapes. She also made porcelain dolls and I am fortunate enough to have three of her most elegantly costumed ones.

Love the viola, was sad when my son gave it up. I also love oboes and French horns. Especially oboes. I gave up the oboe when I got braces. Sad, but probably prevented me from growing up chinless. My husband and I were married to this Mozart piece, which features the oboe: Serenade For Winds, K.361: 3rd Movement

How very special to be serenaded to sleep by your parents’ music-making.