Today we honor Martin Luther King, Jr., the civil rights leader who, with nonviolent protest, reminded our country and the world that “all men are created equal”and should be treated as such. Here in the Washington, D.C. area there will be special events and celebration of Dr. King’s life at the new memorial dedicated to him.

What if Dr. King had not lived? How would the course of the civil rights movement been changed? What if his life had not been so tragically cut short? What other great accomplishments might he have made?

That’s my theme today. What if? Regency-style. 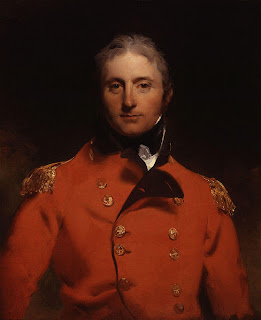 Today is also the anniversary of the death of Sir John Moore. On this date in 1809, the British army in Spain was in retreat from French forces, reaching the sea in Portugal where transport ships were due to arrive to take the soldiers back to England. Sir John Moore commanded the British forces and gained a tactical advantage over the French which enabled the British army to escape. During the fighting, Moore was struck by cannon shot and, after several hours of suffering, died from the wounds.

Moore had a distinguished army career that began with the American Revolution, included the Irish Rebellion and establishment of several army reforms, culminating with the Napoleonic war in Spain.

But it seemed to me that his death was also one of those pivotal events in history. If Moore had not been killed, the course of history might very well have been altered.

Moore was commanding in Spain at that time, because three senior commanders had been recalled for inquiry after allowing the defeated French army to evacuate their troops, with all their materials, supplies, and plunder, without further conflict. One of those recalled was Sir Arthur Wellesley, who was commanding forces at Vimeiro. Wellesley, who would, of course, become the Duke of Wellington, had been vehemently against the evacuation and he was ultimately cleared of any wrong doing.

One more interesting note about Sir John Moore. While he was dying, he is supposed to have said to his friend, Stanhope, “Remember me to your sister.” The sister was Lady Hester Stanhope, the colorful and adventurous Middle Eastern traveler. Some thought Lady Hester and Moore might have married. What if that would have happened?

Can you think of other pivotal moments in history? Do you ever wonder “What if?” about an event in your life?

And spare a moment today to think about Dr. Martin Luther King, Jr.

The unexpected death of a leader is, of course, always pivotal. Funny you should bring this up. Last night, my brother brought up the creator of Bird’s Eye, the man responsible for developing flash freezing. Can you imagine your life without flash freezing?

In my own life, would I have so actively pursued my writing if I hadn’t been laid off?

flash freezing! Good example. As is your example of being laid off. Sometimes our biggest trials in life are our biggest opportunities!

What if I hadn’t read that horrid best seller that convinced me even I could write better? Or what if that friend hadn’t lent it to me?

What if George III hadn’t recovered from his first attack of porphyria and Prinny had been awarded the Regency in 1788 (I think it was) rather than 1810? Would Fox have become PM? Would Britain then have conducted the wars with France differently? Would it have even gone to war?

I kind of steer clear of what-if’s in real life though. I find it quite a destructive thing, even if there are things I would, deep down, have changed. But in history it’s a fascinating subject.

Now, what if I’d spent the day kicking off my next story rather than messing about on the internet!

I’m always fascinated by what would have happened if there had been a successful French invasion of England during the Napoleonic wars. There were quite a few near misses. And what if both sides had developed a crack balloonist squad?

Living in the DC area makes us think a lot about what ifs! Here’s a big one for y’all to comtemplate: What if our founding fathers had NOT decided to fight for colonial rights? Imagine how that would have changed our world. From there till now, there are probably hundreds of what ifs that could have drastically changed our way of life.
As for myself, I’ve got several what ifs that cross my mind at times but my greatest what if is: I wonder where I’d be in my life if I had studied art instead of literature?
Intriguing post, Diane, thanks for the ponderance of thought. : )

Marguerite, that’s a good one!!! Or what if George III had not lost his sanity? He would have kept Prinny in check. Would he have made different decisions about the Napoleonic War?

Amy, we might be singing God Save the Queen instead of our national anthem!
Would the French Revolution have happened if our Revolution hadn’t happened?

Good question, Diane! Everything in history is linked some way, some how! Fascinating post. Thanks. : )