I left you last Wednesday on a bit of a cliffhanger. If you missed it, that post is here. I was attempting to follow an early 19th century recipe that, one supposes, any young Regency lady might do as a project to pass the time.

A few general observations and hyptheses about my results, which were not the Epic Failure of last week’s post, but not quite an unqualified success. Then we’ll move to pictures

1. The instructions say to leave the item in the alum solution for 24 hours. My best results came when I removed the item after something like 2 hours.

2. Based on No.1 I began to wonder if today we have what might be called Super Alum from the perspective of a Regency lady trying to impress her bother’s hot friend with her artistic abilities. Is today’s alum so pure I need to considerably dilute my solution? Or is a beer quart of water more like a gallon?

3. Could I possibly have a crystallizing super power? (If so, why did it take so long to manifest?)

4. The crystals are not even remotely orange. Or that unfortunate yellow. They are still white. Super Alum may be impervious to red food dye and rose pigment.

5. I believe my finest results would be displayed on a Regency mantle by an indulgent papa, to be, alas, thoroughly mocked by the brother, as any sibling would do, regardless of the century.

Edited to add: I just discovered that if you click on a picture, you get a slide show. And since I uploaded very high-resolution pictures, you can see an amazing amount of detail. I high recommend doing that. Really. One of the pictures has a reflection of the view from the kitchen window…

Picking up from the Cliffhanger in Pictures

Surely this is delicate enough? Frond snipped and dipped. 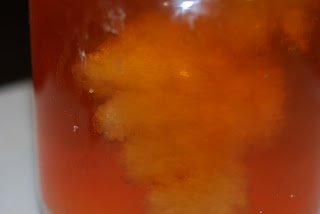 Or the Loch Ness Monster? 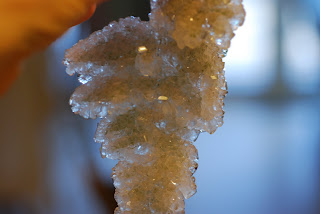 This picture (above) looks more successful than it was. It’s definitely prettier and not a rotting mess. But the crystals are quite heavy. The frond used to be delicate. now it’s not, except to touch. But this IS a crystallized fern frond. 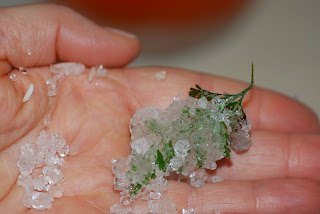 A clump. The crystals are still too big and heavy for the delicate fern fond. Your brother’s hot friend will not be sufficiently impressed. Damn.

I reheated my solution and went looking for more victims. 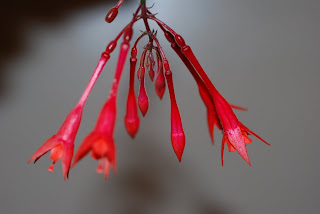 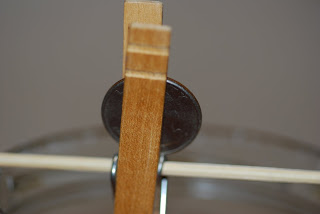 I used a quarter to weight my clothes pin so it would stop flipping over because of the bouyant fuschia. I thought that was pretty clever, actually. When I was done, my son insisted on the return of his quarter.

The fuschia looks like a monster. A scary monster. Don’t go in the water! 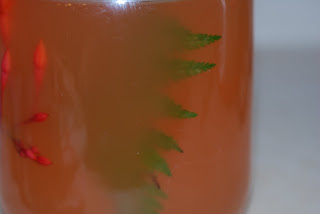 Here’s the fuschia and the fern frond. Hanging out together. Thinking they’re safe. They’re not. 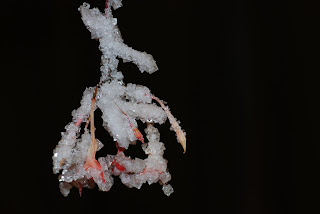 Well, this is somewhat successful, in that there’s crystals but as you can see, the fuschia is drying up, and it’s not what you’d call pretty.

So, I went and got another kind of fern frond, reheated my solution, and uttered my sacrificial prayer. Two hours later I walked past my Jar Of Science and saw there were crystals all over my frond. So I removed it even though there were, strictly speaking, 20 hours to go. 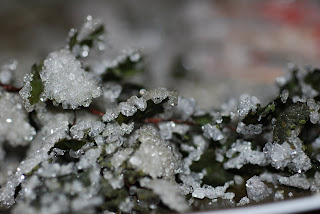 You’ll note that these crystals are considerably smaller. 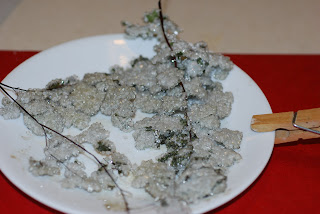 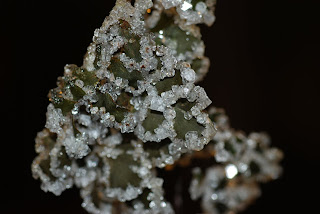 This is the other side of the last fern frond. Again, kind of pretty. I could suspend them from something and it might look kind of cool if you only got a quick look!

I’m going to try again with a rose and a bath time of maybe an hour or two. I may also further dilute my solution.

The process works. But would the young Regency lady win the heart of her brother’s hot friend?

Or would she get revenge and attempt to crystallize someone’s pen knife?

Thanks for posting this. I was very curious as to how your experiment would turn out after reading part 1.

And I admire your perseverance. I would have dumped the experiment after the first failure! 🙂

I am sensing a crystal addiction…

I wonder how the process would work on non plant matter. Maybe a small doily? You could have “ice” covered snowflakes for decorations next winter.

So in the time to word verify, I realized the doily would get soggy in the solution. You have to have something structural. I am becoming addicted by proxy….

So the idea is to have the items look as they would after an ice storm, but without all the messy melting and dripping on the floor? Maybe you could collect the crystals themselves, put them in a pretty glass container, and then put them in a window — they might work as prisms.

And I agree with susied, I’m in awe of your patience with this project.

I would crystallise his underpants. Heh heh.

Full marks for perseverance, Carolyn. The crystals look pretty, what about making some ‘diamond’ jewellery by alumising a bracelet [or a tiara]?….

Anonymous: Crystallize his underpants!!! OMG. That would be hilarious!

If her brother’s hot friend is into science (IMHO scientific heroes are very cool) he might be impressed with her perseverance… and maybe want to run some experiments together?

I think each result is very cool. Don’t know about putting them on the mantle, though.

My youngest son went through four years of science fair crystal projects so I got to do a whole bunch of alum crystal experiments. We did something like this and used wire pipe cleaners shaped into snowflakes and grew crystals on them. Those were really pretty.