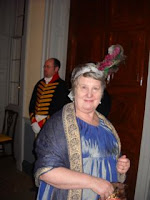 I attended a Twelfth Night Ball last weekend (a bit late, but who among us really tracks these things?) at Riversdale House Museum. It was fab, I wore my new feathers, and after talking to fellow guests my ladies maid (husband) and I retired to insert my feathers to their upright position. The secret? When you twist your scarf into a turban, you pin in your feathers and use the twist to hold it into place. It will remain upright for some time even after vigorous dancing. If your feathers remain erect for more than four hours, you must seek immediate medical help… 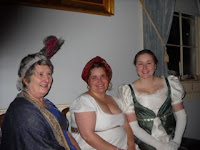 And here’s a video of how to twist a scarf into a turban. And doesn’t this lady in the center, who used this technique, look great?

The ball was a lot of fun with dancing and supper. One interesting thing was that at the beginning we seemed to have more men than women and then toward the end many of the men mysteriously disappeared and so we actually had a distaff set for one of the later dances. In Regency/Federal times they would have retired to drink and smoke, but since this is a fragile historical building, this was not an option. I think they went for a quiet sit down, exhausted by female energy. 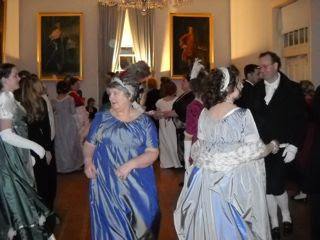 Here we are dancing in a room that was originally the house’s stables and carriage house. It’s actually the west wing of the house and went through various incarnations over the past two hundred years and the walls are hung with copies of portraits of the Lords Baltimore, the founders of Maryland (like no one ever lived here before?). The first owner of the house, Rosalie Calvert, married into the family, although she was a Belgian with sophisticated European tastes who had fled to the New World to escape Napoleon.

If you’re in the Washington DC area you must visit Riversdale. Come this Sunday and you’ll meet me–I volunteer as a docent. Coming up on February 11, we have a program on chocolate, Tasting the Past: A Chocolate Sampler, which explores the history of chocolate in America. I definitely plan to attend that one! For a full schedule of events throughout the year, go here.

Other news I have to share today include our own Risky Elena guestblogging at Writer Unboxed on her successful comeback in the age of digital publishing. Go Elena! And you go on over there and say hi!

I linked earlier in the post to turban-tying instructions at American Duchess. This is a wonderful site, with lots of how-to stuff, solid historical research, and a source for historical footwear. If you love Downton Abbey (and who doesn’t, with the exception of me) you have surely noticed the clothes. Even I like the clothes. This is her latest offering, these glorious Astoria shoes from that period. The way it works is that the Duchess must receive pre-orders to go into production and if you put in an order early (now) you’ll receive a discount. Yum.

One of the other reasons this period is so popular right now, other than PBS, is that this April is the 100th anniversary of the Titanic and there’s a lot of historical reenactment connected with it. It’s also the 200th anniversary of the war of 1812, something Riversdale is involved in since the inglorious Battle of Bladensburg took place very near the house, followed by the sacking of Washington. Are you taking part in any events or planning to attend as an observer?

I’m planning a costume for the Titanic Tea at RomCon. I think I’m going to sacrifice a vintage kimono I’ve been dragging around since I was 12 … The Regency shoe American Duchess is doing is also the perfect shape for the Titanic era (it fails as a Regency shoe, unfortunately as the entire upper is shaped wrong).

Looks like a marvelous time. LOVE your feathers! And those shoes.

Oh, another Riversdale House Museum event I missed. And I have to miss the chocolate one, too, because I’m attending an all day lecture on the Regency at the Smithsonian. So far this is the third thing I’d want to do on Feb 11 if I could clone myself.

You look FABULOUS!! I must check out the turban video.

Those shoes are to die for!!!

Appears as if you had great fun, Janet, and I just love the costumes! Even the guy in stockings & knee breeches! Super thanks for giving us a link to the American Duchess blog. I would totally love a pair of every shoe featured, especially the Georgiana silks–wow! They’d make fab wedding shoes, don’t you think?

By the by, I must’ve missed something…You don’t like Downton Abbey? *gasp* 😉

Congratulations on having the nerve to stand up and say that you don’t like Downton Abbey. Lovely pics!