Now that I’ve finished reissuing my old “Three Disgraces” trilogy, I’m looking at the remaining two titles in my backlist. I’m pretty sure I want to reissue my novella “The Wedding Wager” which first appeared in the anthology HIS BLUSHING BRIDE, as it is. Although it’s different in style than my later books and may need a different cover to match, it should please readers who like sweet, traditional Regency novellas.

I’m not so sure about my first published Regency, LORD LANGDON’S KISS, which I recently glanced through. To put it as kindly as possible, I have improved a great deal as a writer since then! Some readers and reviewers loved it, but it garnered about 3 stars on the average (which is probably about right). One reviewer talked about the “increasing depth of characterization” in the book and now I understand what she meant. The first half or so could use some work.

The question I’m pondering now is whether to reissue the book at all. I don’t want readers who happen to read this title first to be put off trying my later books. If I do reissue it , should I try for a do-over?

This is the cool thing about reissues. I was tickled when Janet announced that a new edition of her debut Regency, DEDICATION, is coming out from LooseId. Not because the original wasn’t fantastic already, but because this time Janet says it will have “all the sex I really wanted to put in the first time around but which was just inferred”. What’s not to love?

What do you think about do-overs? Any books you would like to rework or see reworked? 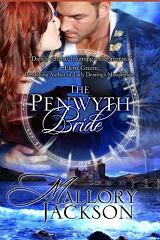 P.S. Next Saturday, I’ll be interviewing Mallory Jackson, author of THE PENWYTH BRIDE, a haunting paranormal romance set in 18th century Cornwall. Visit and comment for the chance to win an e-copy!

If you do decide to revise it, please make it clear (ideally in brackets as part of the title) that it is a revised version. That sort of thing really matters to some readers!

This may be completely impracticable, since I don’t know how long the original book is or how cost relates to data size etc., but I wonder if it might be possible for you to have the original version as an appendix to a revised version? That way readers could choose which version to read, or even read both, without the disadvantage of the original version being taken as the best you can do!

Thanks! You’ve given me a lot to think about. Including both versions is an interesting thought, though I’m not sure who would want to take the time to read both. I’m pretty sure length wouldn’t be an issue.

Elena,
I say GO FOR IT!
Revise Lord Langdon’s Kiss and fix everything you want to fix.

That said, I have to say that I liked The Rake and The Reformer by Mary Jo Putney better than the revised The Rake, but I think that is because the first version was more “Regency” IMO

Absolutely, a reissue gives you a chance to get it right! Tho I have to admit that Dedication still isn’t a total bonkfest.

I own quite a few books with two books in one, offered at a discount, ie, costs less than the price of two separate books. Some people like to compare and see the difference and the development of the writer. It’s a peek inside. I agree that it would need to be clear, on the front cover, but I don’t think it would be a problem. “Original” title and “Revised” title might be enough. Then include a note at the beginning stating you wanted to share the story with all you’ve learned since you first wrote it.

I’ve always wondered what LOTR would have been like if Tolkien could have gone back and edited, since the first was printed before the last was finished. He had intended it to be a children’s book, a continuation of The Hobbit, but it changed early on, and darkened as he went.

Diane, I also liked the Regency version of R&R a little better, though both are excellent.

Janet, assume you’re not taking anything out, just adding some? I expect it’ll be great.

Judy, thanks for the ideas. Re LOTR, we all love the seris but even my younger daughter thinks the beginning is a bit slow and it gets better as it gets darker. One thing I would have liked to see in a do-over is a greater role for Arwen. I’m glad she had that in the movie. When I first read the books I was rooting for Eowyn to get Aragorn.

I am not really sure how I feel about reissues. I like to see older books available again. It allows us to catch up with a favorite author’s backlist and gives new readers an opportunity to find them. The question comes when the books are rewritten. I can understand the desire of an author to “fix” them. There have been parts of some books I wish an author would clean up or smooth out. At the same time, however, to read those early books shows the reader how an author has matured and developed in their craft.

I would like to second Anonymous’ comment about identifying reissues clearly, especially if there is a change in title. When I worke at a library, it was a concern. Most libraries have very limited funds. When you are trying to build your collection of an author’s work, it is frustrating to duplicate a book you already have. That means one less new book you can buy.

Pat, thanks for your inputs. I was concerned about new-to-me readers picking up this book first and not wanting to read others. I hadn’t put as much thought into the other side of things, but now that you mention it, I’ve often enjoyed reading favorite authors’ first works and seeing how the latent talent has evolved.

After everyone’s comments, I’m inclined to put out both versions packaged together, under the original title and with an explanatory note.

I’ll think about it again once I’m done with the work-in-progress.

I’d do two versions. The original, left as is, and another version, which would probably be a complete re-write and entirely different.

Carolyn, it could turn out that way. Right now I don’t think the changes would be huge but I won’t know for sure until I’m well into it.

go for it! i like remakes especially ones with cool vintage covers too

Critiquing my younger self » Risky Regencies

[…] I first talked about the idea of a Do Over, Carolyn suggested it might turn into a completely different story. Now that I’m getting into […]