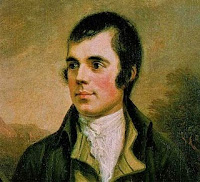 I have made a disturbing discovery. In a few hours I will be aboard a plane to England and if there are any Scotsmen aboard, it may not be a restful flight.

Today is Robert Burn’s birthday, celebrated with a traditional Burns Supper which range from stentoriously formal gatherings of esthetes and scholars to uproariously informal rave-ups of drunkards and louts (Robert Burns Country). 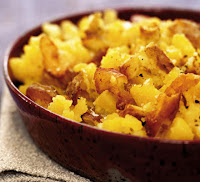 Reflecting Burns’ vigorous, earthy, emotional poems, a Burns Supper menu should include Neeps and Tatties (recipe here), featuring the ever popular combo of rutabagas (also known as swedes) and potatoes, and haggis, the great chieftain o’ the pudding race. Mmmm!

… oat-meale mixed with blood, and the Liver of either Sheepe, Calfe or Swine, maketh that pudding which is called the Haggas or Haggus, of whose goodnesse it is in vaine to boast, because there is hardly to be found a man that doth not affect them. The English Huswife, 1615

Here’s a modern recipe for haggis. Hungry yet?

There are many Burns resources online so I thought I’d mention a couple I found. You can find all of his poems at Robert Burns Country including a translation of dialect terms into several languages including American. At robertburns.co.uk you can download the XXX-rated The Merry Muses, which includes such masterpieces as Nine Inch Will Please A Lady. (Talking of which, check out this timeline of Burns’ busy and prolific life at the Burns Museum in his birthplace in Alloway, Scotland.)

And naturally the celebrations are washed down with whiskey/whisky, however you’d like to spell it. And although in Romancelandia Regency dukes swill it like water, it didn’t really catch on until much later, notably after whiskey production became legal in 1823, following years of enthusiastic consumption in Scotland. So unless his grace is Scottish and/or has a still at the bottom of the garden of his London town house, it’s not going to be the ducal beverage of choice. There’s a history of whiskey here which includes an account of the funeral of Peter Grant, who was the oldest survivor of the 1745 Jacobite uprising (110 years old!) in 1824; four gallons of whiskey were drunk even before the coffin was lifted to take to the burial ground.

Questions for you: when did people start drinking whiskey socially in England? And what would you include, including favorite Burns’ poems, at your Burns Supper?

Enjoy your flight. Hopefully you will have a few Scots aboard to add revelry to the occasion.

I’ve had haggis once, and that was plenty!

You can’t go wrong with Annie Laurie and I think I’ll stick with shortbread! Makes me want to read another Scotland Street book–I think the characters therein usually mark Burns birthday, if I remember correctly.

Many pics I’ve seen of Burns Nights are all men in suits.

I would include women! Perhaps even an all-woman-rave-up-and -drunken-louts Burns Supper.

I’ve had haggis and chips, which tasted like deepfried oatmeal. Not unpleasant, but you wondered why they’d bothered. Basically it’s a sort of sausage.

Hmm, men in suits? Vertical and awake or horizontal and unconscious? It does seem suspiciously like an all-boy activity.

Safe trip and return, Janet. I have visited Burns’ birthplace and am quite fond of his poetry.

I’ve also eaten haggis and like Jane G, the once was enough, thank you!

I am afraid my Robert Burns celebration will have to consists of Scottish shortbread and a few cups of Earl Gray. Yes, I’m a party animal!

I’m just saying, Gerard Butler has been planning a movie about Burns for years. Last interview I saw, he said it was looking good for production soon.

May your trip be all you need it to be, Janet.

I visited Scotland while on international assignment in the UK. I sampled many kinds of whisky, from those that tasted of heather to those that tasted like peat (like falling face down in a bog, I thought). But I did not try haggis and do not plan to!