Happy Release Day To Me! (Contest!) 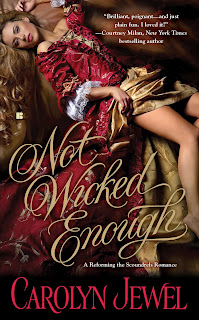 Join us in a big Riskies Welcome to author Carolyn Jewel. Her historical romance, Not Wicked Enough, is out now. You should rush out and buy a copy. Also copies for all your friends and neighbors. The dog might like a copy. In fact, you’ll probably need several for the dog. (HOURS when your pet is not chewing on your furniture!)
You’ll be thought of as a hero or heroine for doing this, no costume required! But you could wear one if you want. (Please send pics.)

Q: Tell us about yourself, Carolyn

A: Carolyn Jewel was born on a moonless night. That darkness was seared into her soul and she became an award winning author of historical and paranormal romance. She has a very dusty car and a Master’s degree in English that proves useful at the oddest times. An avid fan of fine chocolate, finer heroines, Bollywood films, and heroism in all forms, she has three cats and a dog. Also a son. One of the cats is his.

Q: Tell us About Your Book

A: When Lily Wellstone heads to the Bitterward Estate to comfort her widowed friend Eugenia, she certainly does not have romance in mind. In fact the playful but level-headed Lily is amused to no end when, en route, a gypsy gifts her with a beautiful medallion, claiming it will ensnare the romantic desires of a stranger.

But Fate has other plans in the form of Eugenia’s ruggedly handsome brother, the Duke of Mountjoy. One day at Bitterward and Lily can’t deny the sizzling attraction between her and the roguish duke. Nothing can come of it, of course. She’s not looking for entanglements and he’s practically engaged. But whether it’s her outgoing nature and the duke’s outlandish ways sparking off one another; or the mysterious gypsy medallion working “magic”—hearts are stirring in the most unexpected and wicked ways…

Q: Are you really Carolyn Jewel? Because I heard she’s shy and never does interviews.

A: Yes, I am Carolyn. You can be assured it’s true because I spell my last name correctly. It’s true I’m shy. Like most writers, I’m hard to spot in the wild unless you know what you’re looking for. I was tricked into coming here.

Oh, come on. Like you don’t know what happens.

Certain people will stand on a corner and say, in a deliberately loud voice, “I HATE this book!” And then they throw a book on the ground. Every writer within a three mile radius will converge on that location to see what book was so despised as to elicit that sort of reaction. At that point, it’s pretty easy to capture an author because they’re an emotional lot and they’re crying and in shock.

A more dangerous tactic is to stand outside a stationer’s or bookstore and yell “Free Moleskines!” As you can imagine, the danger of getting trampled is quite high. Sure, you can capture several authors with this method, but I don’t feel it’s a risk anyone should take.

Q: How were you captured?

A: It was the Moleskine trick. I really need a new one. Mine is almost full. That lady didn’t look like a liar.

Q: Let’s talk about the darkness seared into your soul.

Q: So. What’s your favorite scene in Not Wicked Enough?

A: It was the moonless night, really. A LOT of authors are born on moonless nights. You’d be surprised. We’re a bit sensitive because of that. I know, I know, everyone’s heard there’s one who was born in the afternoon on a sunny day, but honestly, how likely is that? It’s one of those urban myths. Check your spam. I bet you have a chain email with some sappy story about the writer born on a sunny day (It was NOT Stephen King!). Please, don’t forward it, okay? Anyway, if we’re not born on a moonless night, then it’s a rainy one, which is almost the same thing, or else we grew up in a labyrinth. Sometimes a literal one.

Q: So. What’s your favorite scene in Not Wicked Enough?

A: Why are you asking me to chose? It’s like asking me which of my children I love the best.

A: Is that a Molskine?

Q: Back off or I’m tearing a page out of the middle.

What’s your favorite scene in Not Wicked Enough?

A: Fine. I like the scene when Lily takes off all her clothes on a dare. But I’m not saying that’s my favorite.

Q: Did that really happen?

Q: Tell us about the series, Reforming the Scoundrels.


A: Not Wicked Enough is the first book in a series that will be loosely linked by a locket reputed to have magical properties, in that it unites the wearer with his or her perfect love. The second book is Not Proper Enough. It’s kind of dirty.

A: Super dirty. So far. I just turned it in so who knows what stays. Of course, Not Wicked Enough is also dirty. I was telling the truth about Chapter 17.

A: Well, Not Proper Enough will be out in September 2012, that’s the book following Not Wicked Enough.

I’m doing a self-published historical romance anthology with NYT bestselling authors Courtney Milan and Sherry Thomas. The title of the anthology is Midnight Scandals, and it should be out in June or July of this year.

By the end of this month, I should have a My Immortals series novella available (self-published) which is a much expanded version of the short story Future Tense, with the sex scenes restored. I call it Future Tense, the Uncensored Version. It’s totally hot and also kind of dirty. I’m just waiting for some final editing on that.

My next project is a My Immortals novel. It will be about Harsh Marit and in that book I will be channeling my love of Arjun Rampal.

A: You want me to give away your secret identity?

Q: No. If you do that, you won’t get any more cookies.

A: I’m giving away five copies of Not Wicked Enough with the expectation that the winners will do a review of the book in return. An HONEST review, please. No contract required. Rules are below. I’m happy to gift the digital version, by the way.

Void where prohibited. Must be 18 or older to participate. You must also leave me a way to contact you in your comment or commit to checking back on Thursday to see if you won.

Leave a comment by Midnight Pacific on Wednesday February 8, 2012. It’s more fun if your comment is amusing, but it doesn’t have to be.

International is OK, but I will probably have to send international winners a paper copy.

Congratulations on the new release and thank you for the contest!

It’s too early here for funny here- I’m only partially into my first cup of coffee. I’m intrigued–first, this launches a new series (yay!), and second, mysterious medallions and naughty dares are involved. Sounds promising, and I’m updating the wishlist on my Nook as I type!

LOL Great interview. I can’t wait to read this and the rest of the series.

My email is thriftyreader at gmail dot com. Here’s hoping I win a copy. 😛

Can I be entered in the contest?

Gotta watch out for those authors born on moonless nights, it seems!

Ooh sounds like fun! A bit of an historical romp with some supernatural bits thrown in – ticks all my boxes! I’m dying to know why the heroine has to strip in Chapter 17 – what dare did she lose and what would the other person’s forfeit have been?!! Hope the hero loses a few bets here and there as well 😉
Would love to win a copy…

Perhaps Lily did not lose the bet; I’d like to think that she won it. And even if she technically lost, I’ll bet that events (ahem!) result that allow her to win True Love and an HEA. Very much looking forward to reading this.

Ooooooh I want it! 🙂 Sounds great – magical and historical.

What a great interview! I am so very intrigued and must know what happens in Chapter 17! Just how dirty do the H/h get???

I would be more than happy to do a review and post it on Goodreads and where I blog if you like.

Great Interview 🙂 having read and absolutely adored both Scandal and indiscreet I am ecstatic to dive into a new Carolyn Jewel historical series! Thanks for the giveaway!

You are just tooo funny, Carolyn!!!!

Congrats on the new release! We need the cover on the sidebar!

Thank you for the giveaway!

If it’s anywhere near as brilliant as Indiscreet, count me in!

congrats on the new release! i love this cover! loved the interview it was funny …the part where the page was almost torn out and you gasp…i would have gasped too then probably have tackled her not caring if i had plumbers crack in the air to prevent that……i def have this on my wishlist.

Also when you say dirty….can we think oh he touched my boosom or full out hot hot hot smutty goodness?

would love a copy for the late night blushes, giggles, and gasps! I mean me not the book! And if I win you can reach me @ my email svaldez0724@yahoo.com.

so would love to read this!!! the cover is gorgeous!!!

thank you for the giveaway!!!

Love the cover – seems pretty wicked to me! Would so love to do a review for you. Cheers!

This book sounds soo…. fun, sexy, pleasurable. Especially the supposed scene in chapter 17. Oh my. I wish to be included in the contest please.

Congratulations on the new release! Loved the tongue in cheek interview too…I’m really looking forward to all of the upcoming self published titles you are currently working on (you are definitely keeping busy!). Not Wicked Enough sounds great and I really love the cover – it’s quite sassy. Thanks for the giveaway!

Congrats on the book and I’m psyched that the next book is Harsh’s!
I haven’t read any of your historicals and for that reason you should rig the Randomizer tp pick me!
Thanks again,
MJB
mamjb65 AT gmail DOT com

I must say, that interview was most enjoyable. As Diane said “tooo funny.” Moleskin? The moleskin we use is to put on our feet when we go hiking so we don’t get blisters. Is writer moleskin different or do you put it on your fingers to prevent blisters as you write/type away to give us all those wonderful books to read?

This sounds like it will be a good series to follow. Best of luck with the release of NOT WICKED ENOUGH, a book with a risky and wicked cover.

More ways to catch a writer: posters saying free books, with wine and cookies. Or just wait outside libraries for people who don’t go in to use the internet, and the staff know by name.

Congratulations on your latest release – you’ve managed to convince me I should read it!

Congratulations on your new release.