We usually do an interview or a guest blog for our featured Sunday authors, but my friend Christine Trent, who is scheduled to talk about her February book, By The King’s Design, today, wound up having family stuff (not family crisis–just stuff) that made it impossible.

Christine still wants to give away one signed copy of By The King’s Design to one lucky commenter, though. We’ll do the selection by Monday night.

Here’s the back cover blurb of By The King’s Design. 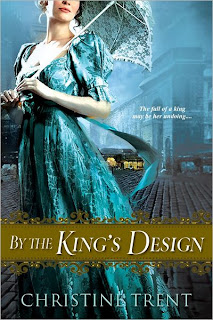 Annabelle “Belle” Stirling inherited the family draper shop from her late father, only to have it sabotaged by her ne’er-do-well brother, Wesley. Belle travels to London to seek redress, and while there, the Prince Regent, future King George IV, commissions her to provide fabrics for his Royal Pavilion. As Belle’s renown spreads, she meets handsome cabinetmaker Putnam Boyce, but worries that marriage will mean sacrificing her now flourishing shop. When Wesley plots to kidnap the newly crowned King, Belle finds herself entangled in a duplicitous world of shifting allegiances, where every choice could have unexpected consequences for her future, her safety, and her kingdom…

The book’s greatest strength is its sympathetic and interesting heroine, who manages to be capable and indomitable without being anachronistic…a fine quiet evening read, with a rare Regency heroine who loves her work and does it well.–Publishers Weekly

Four Stars!
In the tradition of Rosalind Laker, Trent pens stories that illustrate the role women played in the world of art and commerce. She draws readers into the life of a 19th- century interior designer with an enticing backdrop of a love story between a strong woman and a man who is her equal.–RTBook Reviews

And comment for a chance to win a copy!

I have come across references to the Luddites in other books, but never read any backstory on them. I appreciate books that take the time to fill in the setting with enough details that I can visualize the H/H in their world with ease.

Every review I’ve read re. this novel just whets my appetite more and more. I enjoy books in which the heroine is from the “working world”. Thanks for the giveaway.
lcbrower40(at)gmail(dot)com

The reviews all make this sound like a must-read! My appetite is well and truly whetted!

I would like to see Burke and Hare in a Historical.
I can’t wait to read Christine’s new book! I am thrilled to have a chance to win it! DESIGN appeals to me greatly. I am going to buy LIKENESS. The subject interests me immensely. Thank you.

Thanks for the giveaway!

I would love to win. Thanks for the opportunity.
kaiminani at gmail dot com

I would love to read this.
Thanks so much for the giveaway!

By the King’s Design sounds like a very fascinating story with an interesting heroine who is much more than the usual debutante. I’m looking forward to reading this book.

This looks like a fabulous story! 🙂 Thank you for giving us all a chance to win this.

Thank you for the chance to win. This book looks very good to me. I love historical fiction.

Thanks for the chance to win a copy of this book. Sounds so cvery interesting and hope to read it soon ! Lynda716@hotmail.com

Thanks for the chance to win a copy of this book. Sounds so cvery interesting and hope to read it soon ! Lynda716@hotmail.com

Looking forward to reading this one. Sounds like a great book.

Off the top of my head, I can’t think of any particular person (though for some reason Constable does come to mind). However, this sounds like a very interesting work. I love little known historical detail and this glimpse of skilled trades sounds exciting.

Sounds like a new career-focused herioine – thanks for the giveaway
gbell1@live.ca

I would love to read BY THE KING’S DESIGN thank you. I loved the excerpt.

What an interesting career choice! Providing designs for the Royal Family must have been of great significance, but I believe they weren’t actually very prompt payers…?

I love that this book includes real historical figures! I can’t wait to read it. Thanks for the opportunity to win a copy.
I would like to Charles Dickens in a historical book since he is one of my favorite authors. It would be interesting to see what someone could come up with to include him in the story.
mamabunny13 at gmail dot com

I’d love to read this so please enter me.

Is it too late to get into the drawing? Sounds like a fun read! Thanks, JoAnn (at) rebelpuritan (dot) com