Congrats to the winners of last week’s giveaway of Not Wicked Enough. It was easy to give eBooks to the winners who preferred that reading format. In fact, it was so easy that I got to thinking that eBook readers don’t usually get to share in the giveaway love.

I have decided to giveaway 20 eBook copies of Not Wicked Enough. Visit my blog to enter and for details and rules. Entry closes at midnight Pacific on February 16, 2012, so get there quick!

And now, on to my second topic.

Contraception during the Regency

In Not Wicked Enough, the hero, Mountjoy, uses a condom in a somewhat unusual way, in that he is not using it to prevent STDs but to prevent conception. Only, actually, I don’t believe it was all that unusual.

The common belief is that men used condoms only to prevent disease. This would not have been entirely effective of course, since many STDs would have passed through a condom made of gut. The history of condoms is a long one. There is evidence that the Romans used condoms, as did the Chinese and the Japanese. The fact that many of these early condoms covered only the head of the penis speaks rather loudly, I think, of the intention to prevent not disease but the transmission of sperm.

The point, really, is that humans the world over have made the connection between disease, pregnancy and intercourse, and that knowledge, however inaccurately they may have understood the underlying biological processes, is not new.

In Europe, Antonie van Leeuwenhoek “discovered” sperm circa 1677. The role of sperm in conception was well known by the Regency. The actual process of conception may not have been correctly understood, but one need only know that getting sperm into a woman was necessary for conception and that the penis was the sperm delivery system. Once you’ve figured this out, it strains credulity to suggest that no one then realized that if you inferred with the delivery system, you would vastly decrease the chance of conception. No sperm. No baby.

If a man wears a condom, he’s going to notice that the sperm stays inside the condom. He may, in fact, not care even a little that he has just reduced the chance of knocking up his partner. He may have worn the condom for the sole purpose of preventing disease. But it’s too obvious a connection for an educated, informed man not to make. In fact, there are historical mentions of the use of condoms as contraception throughout history.

Unquestionably, their use as a disease preventative is mentioned far more often. That makes sense. Men didn’t want to get the clap and in the West, men tend to own the discourse. And spin it, by the way.

It’s important to keep in mind the highly charged debate around contraception and female reproduction. This is NOT a subject people talked about frankly. As with references to access to abortion, the language is coded. And yet, throughout time and history, women have acted to control their reproduction through abstinence (which all women recognize is not always possible or even a choice they have) contraception, abortion, including self-mutilation once pregnant, and infanticide.

So, in Not Wicked Enough, Mountjoy is an educated man of means with access to other educated men of means. He has the money to purchase the very highest quality condoms. None of his peers would blink at his doing so. Men didn’t want to get the clap, after all. When he embarks on his affair with Lily, he is aware he can withdraw and thus interfere with the sperm delivery system. He even does so. But he does not want to continue with that method. And being the sort of man with access to condoms and who would know that a condom would also prevent the delivery of sperm, it’s impossible, in my opinion, for him not to also understand that if he wears a condom, he can finish inside and not put Lily at risk of conception. And that’s what he does.

In the Regency, the best condoms were made from highly processed gut that required the use of caustic chemicals. They would stiffen (HAH!) when completed and therefore needed to be soaked in liquid to soften before use. They were typically fastened to the base of the penis by a ribbon.

Make of it what you will, but condoms were washed (one prays about the washing part) and reused. 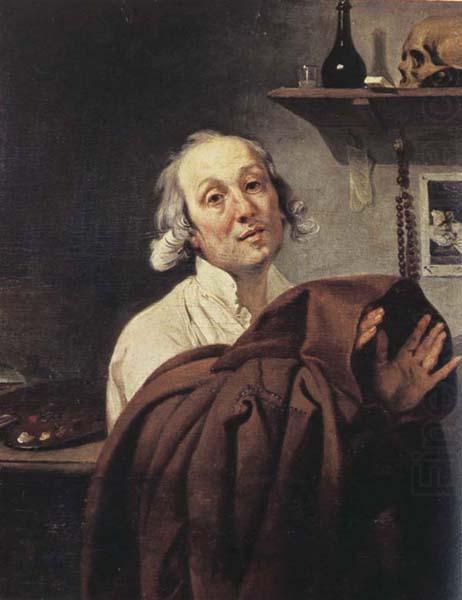 In this 1779 painting by German artist Johann Zoffany (Self-Portait as a Monk) on the wall to the left of the rosary beads and beneath the bottle are two condoms.

Airing out, one supposes.

Think about the title of this painting: Self-portrait as a Monk and then consider the  presence of the condoms and all that is suggested by those two things.

Naturally a monk would also wish to avoid the clap, but oh, the coded images. A pregnant nun would be so awfully inconvenient.

I’ve never seen that portrait! Love it. I have seen the condom factory etching where the goods are being inspected and I’ve seen pictures of extant “French letters” (or “English overcoats” if you were French).

I agree with your logic about the use of condoms for preventing pregnancy and I’m sooooooo glad that you didn’t write it like a modern one where he just takes it out of his pocket dry and slips it on. Saw that in a book once (they were at a ball I think) and was totally thrown out of the book.

Thanks, Isobel! That portrait speaks volumes, doesn’t it? I believe the original is in the National Gallery in Parma.

My research was pretty clear on the requirement that those condoms needed to be softened first so there just wasn’t a way around that. It’s difficult to find good source materials that are also well documented. Some grad student needs to write a dissertation on this!

I always learn the most interesting things on this blog…lol…modern man definitely has it much better than historical man when it comes to contraception choices and convenience as do modern women!

Thank you for a most interesting post. That portrait certainly does raise questions. To think that use of condoms was quick and easy during this time period is not realistic. No foil packets and pliable rubber. It really would take some planning to be prepared to use them.
Best of luck with the release of NOT WICKED ENOUGH.

Zoffany sure had his little joke!
(How do you find these things????)

Great article! I think the first time I read about the use of condoms in a novel set in the 1800’s, was in Noah Gordon’s book Shaman. I completely agree with your assessment that they were used both as a means of contraceptive and to avoid STD’s. Thanks for posting – love the portrait!

Thanks for the comments!

I came across the Zoffany portrait during my research on condoms. It’s included in a book on the history of condoms that isn’t as precise as I would have liked. It also omitted/failed to note the title of the portrait, which I think is HUGELY significant and makes me wonder about how careful the rest of the book was. That said, it’s still an interesting book and I was able to confirm her info (for the Regency) elsewhere.

Does anyone know about average family size for the wealthy in the Regency? Because I don’t think these women were having 20 pregnancies over their lives — Bach’s wife being a notable exception. Either they weren’t having sex or they were using contraception.

Boswell used a condom for contraception on one of his adventures abroad (poor old Boswell, but that’s a post in itself). He was racked with guilt. Using one to avoid disease was one thing, but for contraception–well, that was a mortal sin! It’s a pity he’s not still around, he could join the roster of Republican Presidential candidates.

IN THE FAMILY WAY: Childbearing in the British Aristocracy, by Judith Schneid Lewis is my favorite reference on this subject. According to Lewis, the aristocracy generally wanted large families. Besides the heir, it was useful to have a lot of children to extend the family’s influence: sons to become soldiers, MPs, diplomats, clergy, etc…, and daughters to make dynastic matches.
The mean number of children in the 50 women studied was 7.5, which the author says correlates fairly well with larger demographic studies.

So some families were huge and contraception was generally disapproved of. But there’s also mention in the book that some women may have asked their accoucheurs for help with contraception. Also that others breastfed later babies longer, not because it was reliable contraception but because it can space the pregnancies out a bit more widely.