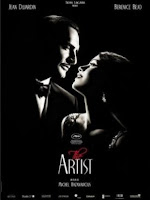 I watched the Academy Awards last night even though I only saw one of the nominated movies–War Horse. That never stopped me from having favorites. I’m delighted that Christopher Plummer won for Best Supporting Actor and Octavia Spencer for Best Supporting Actress. It was fun to see The Artist win so much, but I was disappointed that War Horse did not win anything.

The reason I enjoyed the Academy Awards, I think, is due to fascination with celebrities. To see what the women wore. To see the handsome men. To hear the speeches, which are almost always disappointing, and cringe at the presenters attempting to be funny.

I like to think of Lord Byron as one of the first celebrities in the modern sense of the word. I read an article that said that celebrity, as we think of it, began in the eighteenth and nineteenth centuries when the industrialization of print meant that information could be widely distributed. Lord Byron’s poetry and gossip about his life was certainly available to many.

He was wildly popular when his poetry caught fire with the public. It is said that his wife termed the adulation surrounding him Bryomania. How modern sounding is that? 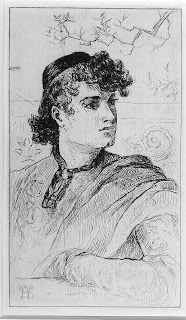 He was perfectly cast for such fame. His verse was emotional and sometimes shocking and he was the quintessential “bad boy” in need of taming. His early life was romantic-his deformity of foot, his tumultuous family including his great-uncle, “Mad Jack.” His early travels in the Mediterranean and his dramatic adopting of native dress, must have exciting to women of his time, especially young fanciful girls who still today idolize celebrities. I like to believe the 19th century drawing I own is one a lovestruck fan drew of Byron.

Like many celebrities, Byron fed the gossip mills. His affair with Caroline Lamb. His later affairs. His separation from his wife amid allegations of cruelty, infidelity and incest with a half-sister. And like many celebrities, Byron met an untimely death, albeit a romantic one, dying of fever while preparing to fight in the Greek war of independence from the Ottoman Empire.

Like other celebrities, especially those who met an early death, Byron lives on in his marvelous works, his letters, and in his legend that still fascinates us.

I don’t watch the Oscars, ever since Annie Hall won over Star Wars. I know; I’m such a geek. 🙂

I remember reading a romance novel with Byron as one of the colorful characters. As I read the description of his behavior, my thought was, “The man was manic/depressive.” (This was before bipolar was used.) I learned his mother was bipolar and institutionalized.

No pressure, Amanda, but I’ll be disappointed if she doesn’t do a fashion follow up. I wonder what the Oscars would look like if she picked what everyone wore….

All I can think about is Angelina Jolie’s awkward leg pose. It reminded me of that leg lamp Ralphie’s dad wins in the movie A Christmas story. The writer mocking her by trying to replicate the pose while she is still on the stage was the icing on top of awkward cake.

I don’t watch the Oscars any more either, but for me the turning point came when Liam Neeson didn’t win for “Schindler’s List”. And a few years later when Clive Owen wasn’t even nominated for “Children of Men”, I was done. Both films were about ordinary men who found it in themselves to be extraordinary heroes, and I thought the actors were wonderful and deserved every award available. Felt the same way about Ralph Fiennes in “The Constant Gardener”.

I missed so many of the movies I didn’t have any strong opinions. I also missed the red carpet show, so I’m definitely hoping Amanda blogs about it!

LOL! I will probably talk about the clothes tomorrow–there were so many I liked 🙂 (and I actually enjoyed many of the movies this year, too, though I haven’t yet seen “War Horse”)

Judy and Susan/DC, it certainly is true that the Academy doesn’t always pick the best movies or actors. I was not persuaded that Meryl Streep was brilliant in the clip they showed. Seemed to me she was Meryl Streep playing Margaret Thatcher. Certainly the other actresses who transformed themselves into the characters they were playing were more deserving.

Kat, I can’t agree more about Angelina’s leg pose. I think (hope) it was done as a joke.

Elena, we’ll have to yell at Amanda if she fails us!!

I certainly hope Amanda gives us her take on the red carpet winners and losers!

I haven’t seen any of the films, but I was glad to see Christopher Plummer win as I have always enjoyed his work.

And you know, O Divine One, what a huge Byron fan I am!

Louisa, I think of you every time I mention Byron!

No one at our house is interested in watching the Oscars, so I always catch just the last little bit of it. My husband went to bed early this year, so I got to see a bit more of it. I tuned in just a Christoper Plummer was leaving the stage.

I have seen none of the movies up for awards this year. War Horse was on our list, but we didn’t make it. Actually, we didn’t go to any movies this past year, not even Harry Potter. We need to get out more.

Thanks so much for the post.I see you offer priceless info. Will definitely come back for more of this.