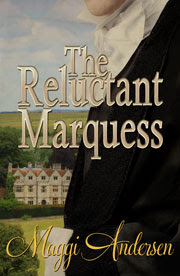 Today our guest is Maggie Andersen who’s paying an afternoon call from Australia via the magic of the internet. Welcome Maggie! Tell us about your book.

The Reluctant Marquess is a Georgian romance. Lord Robert, the Marquess of St. Malin, and Charity Barlow have very different views of marriage. A marriage between a city rake and a country-bred daughter of an academic requires quite a period of adjustment. Charity believes marriage is about love. To Robert marriage is merely an arrangement to produce an heir. He then plans to pack Charity off to one of his country estates. Charity is not the malleable young woman Robert expects her to be. She fights for what she believes in and much conflict ensures.

What drew you to the theme of an arranged marriage?

Writing about married couples interests me. What happens after the wedding? It’s not always the expected happy ending, particularly, when they come from such different worlds. To complicate matters, Lord Robert appears to be carrying a hurt from his past. Charity is a practical woman and sees it as her role to help heal that hurt.

You’ve also written books set in the Victorian and Regency period. Which is your favorite?

The Regency is my favorite era. I read Georgette Heyer at a young age and loved her. She created such charming worlds, I wanted to keep dipping into them. When I’d read all her books dozens of times, I began to create my own.

Did you come across anything surprising in your research for the book?

My mother was an artist, and instilled in me a love of art at an early age. I’m interested in art history particularly. When researching for The Reluctant Marquess, I was interested to discover that during the reigns of the third and fourth Georges it was seen to be unfeminine for a woman to do anything with professional skill. The only career open to a Georgian woman was marriage. She would have considered a loveless marriage infinitely more respectable than the pursuit of a profession. If a suitor presented himself it was her duty to love him, or at any rate marry him. The kitchen and the nursery were her sole spheres of action. She was expected to treat her men-folk with respectful admiration and accept their judgments in a spirit of childlike faith and obey them with unquestioning submission.

Women who wished to be creative were forced to invent a kind of ‘mock art’. Modeling in clay was seen as unfeminine but modeling in wax or bread a feminine occupation. Filigree and mosaic work was copied in coloured paper, Dresden china of rice paper, flowers of lambswool.

Frustrated by the conflict in her marriage and how little of interest she could do as a marchioness, Charity rebels in a small way by carving in wood, a skill she learned from her grandfather, which was a distinctly masculine pursuit.

I rough out the plot first, although that may change and go off in tangents. How the story ends stays fairly fixed in my mind. Names are important, I seldom change them. They help to shape the characters in some mystical way. I edit what I have written the following day which carries me on to the next scene.

What do you like to read/which writers have influenced you?

I have two books coming out later this year. A Baron in Her Bed, (Book One, The Spies of Mayfair Series) set in the Regency era, is released in September. Book Two and Three will be released next year. The Folly at Falconbridge Hall, a late Victorian mystery romance, is released in December.

I have a copy of The Reluctant Marquess to giveaway (world-wide, print or e-book).

The Riskies will pick a winner on Monday evening, March 19, from participants. So let’s chat. If you were a Georgian heroine, which artistic pursuit would you choose?

Surely embroidery would still be acceptable. I would work on a sampler with a pithy quotation. Thanks for the giveaway.
lcbrower40(at)gmail(dot)com

I love reading about marriages of convenience or arranged marriages. It is fascinating to see the couple come to know each other and come together.

I would like to play with the colored paper, please. Reminds me of making quilts which is a favored artistic endeavor in my house.

I think needlework would be something I’d enjoy and could get away with, or maybe watercolors? I’m not sure if I could, and I can’t draw very well, but it would be fun to try painting with watercolors.

Thanks for hosting me, Janet.

Embroidery would have been acceptable, Linda, craft work was not seen as serious art.

Flower arrangement? Not musical in the slightest, would end up with a fatal injury sculpting, watercolors sneer at me and run away, I’d wind up covered in oils, and I find most handicrafts tedious… 😉 So, limited options really. Given the odds, though, I’d be the scullery maid or laundress, which would make me too tired to do anything than artistically collapse into my bed at night.

I think sometimes we forget how stifling life could be for women in this period. I think being rich and eccentric would definitely help in your choice of pursuits, whether it was encrusting things with shells or chasing the footmen.

…or chasing the footmen to encrust them with shells….

Poor scullery maids would have been exhausted, Dee.

I can see you’d adapt to the lifestyle very well, Janet! LOL.

I would dearly love to paint. And this book sounds wonderful!

My great aunt taught me how to tat and do network. In her hands those were definitely artistic endeavors.

I did some research on shell work in the Regency and I think I would definitely enjoy it.

I’m a musician and I’ve dabbled in painting.

What I would really love to tackle is the art of making stained glass. Some of the pieces I have seen, especially in Germany and Austria are amazing. And the pieces at Walpole’s Strawberry Hill look incredible.

And chasing footmen is definitely an art !

Hi Margay and Louisa, thanks for the comment. Footmen were chosen for their looks, they had to be young, tall and strong so they might have been worth chasing!

My, the choices are so limited! As a Georgian woman, I would have to choose embroidery for my creative outlet as that comes closest to my own favorite, quilting. Did quilting exist in the Georgian period? Thanks for the chance to win this book. A marriage that grows into love is one of my favorite tropes.

I don’t think I would have fared well with any artistic pursuit. Probably would have rebelled.

Love that you researched the art history of women’s work. I wonder how class correlated to how acceptable certain artistic activities were for women? Would the “well-born” woman have fewer acceptable options for art-making than gentry, etc.? So interesting–can’t wait to read te book!

I would probably embroider or needle point. The book sounds very interesting. Thanks for the giveaway.

I would have to say embriodery since I used to love to cross stitch.

I am terrible at painting which I would love to be able to do. I am afraid I would be sitting there with my embroidery. I enjoy it, so it wouldn’t be a hardship. It would be such a stifling way to live. I might even take up writing. That is definitely an art form.

Well, I think embroidery since it’s female’s art. But, I would like to try pottery because it’s similar to baking. You have to mold the pattern into a certain shape. It needs patient, imagination and hard work.
Julianaekin@yahoo.com

I can cross stitch and draw and paint but would like to think I’d do something completely outré such as basketweaving. An artistic and useful craft 🙂

It’s kind of funny. I’ve been out there working for a living since I was seventeen. The thought of just running a house and being a mom holds much appeal. If I had to choose, I’d be a closet writer.
Bonnie
bonnieblue at wowway dot com

Thanks for all your great comments!