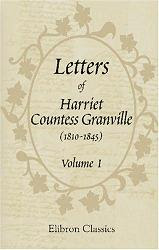 I’ve been reading the Letters of Harriet Countess Granville, daughter of Georgiana, Duchess of Devonshire, who married Viscount (later Earl) Granville. She moved in the highest circles, lived an active social life in England and abroad, for her husband served as ambassador to France for intervals between 1824 and 1841. There are lots of interesting tidbits in her letters and I’ll probably talk more about them in future posts.

This week I’d like to talk about how often she wrote about the dangers of carriage travel.

At one point she writes to her sister:

“Let me warn you of Alconbury Hill, that is, of a horse there that will not back. Off we pelted from the middle of a hill with a curl at the bottom, and would not stop for ages. In short, Granville owns that we were run away with. I never met with such a dreadful danger before.”

In another letter she writes:

“As I was turning into Berkeley Square I met four soldiers carrying a litter covered with a sheet. I asked Samuel what it was. He said they were carrying a dead man home. I tried to avoid it, but the people got round me and I was obliged to stop whilst they passed quite close to me. I asked one of the crowd how it had
happened and he said he had been squeezed by a mob in Pall Mall. A sort of nervous horror made me scarcely able to get on, when I saw Granville Somerset galloping up to me. He said, ‘You must have seen Worcester’. ‘No.’ ‘You must, they were taking him this way.’ ‘What do you mean?’ ‘They say he has had a dreadful accident, and I am going to my mother.’ I leave you to imagine with what feelings I almost ran to Brook Street. Here I found the lobby full of soldiers and servants, the men standing by the litter, and the Duke of Beaufort above, leaning his arms and head on the banisters. To end my story, they found him on examination only stunned, and severely bruised, but not dangerously hurt. I staid whilst they shaved and probed the head. He had been bled on the spot eighteen ounces by a surgeon who fortunately passed at the time. My first account was incorrect. His horse took a fright, ran away and threw him out of his gig against a door-post.” 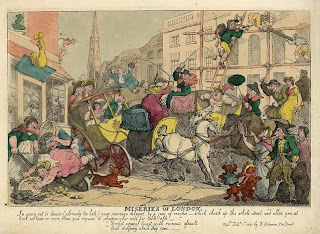 I’m not sure which is scarier, the thought of being crushed in a mob, thrown from a gig, or being bled 18 ounces. It’s clear that life in London was not all balls and lobster patties. 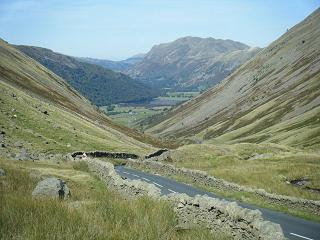 In historical romance, we authors sometimes use carriage accidents to kill people off, usually so someone can inherit something: a title, wealth, debts or other serious responsibilities. I’ll admit to killing off the hero’s parents in one book, in an accident going down Kirkstone Pass in the Lake District. My husband and I drove down that pass while on vacation. Later, when I read a historical account of an accident there, I wasn’t surprised. It must have been quite treacherous during the Regency and probably still is, in bad weather.

Other times we use carriage accidents in a more fun way, to force our characters into situations where they’re forced to get to know one another better. Georgette Heyer used the combination of a snowstorm, a curricle-and-pair and a donkey to strand the hero and heroine of Sylvester at a secluded country inn.

What I think is great about these plot devices is they are totally believable. Much as I love horses—I used to ride regularly—some can be a bit nuts, and even the gentlest horse can be spooked. I’ve only once been run away with. Though I managed to stay calm and in the saddle until the horse tired, but it brought home the dangers of the sport to me in a very real way.

To me, the occasional horse-related accident in romance feels realistic, far more so than scenarios in which the hero’s black stallion gallops for hours without rest or teams of horses transport characters from London to Cornwall in less than a day.

Here’s a great page I found at the Regency Collection on the dangers of carriage travel, which apparently ranged from floods and snow to escaped lionesses.

What do you think of horse-related accidents in romance? Do you find them realistic, or do you think they’re overused? Any favorites?

What a great post, Elena! I must confess I never really gave it much thought, but a carriage accident is a handy device in all sorts of situations in historical romance. Giving it some thought, I think it is no more overused than a car accident or a train accident or a plane crash in contemporary romance.

Having been thrown by, stepped on, run away with and generally beaten up in all sorts of ways by horses I can commiserate with nineteenth century men and women. Horses are noble creatures to be sure but can be flighty, nervous, cranky, stubborn and mean at times.

The scary thing is the medicine of the time was not equal to some of the injuries that can befall someone in a riding or driving accident. Bleeding someone with a head injury? SHUDDER!

This reminds me of a plot device in the Forsyte Saga where someone is run over by a vehicle in London. It seemed very jarring to me but apparently it happened all the time with the crowded streets and the thick smog.

Is Kirkstone Pass the one with a 1:3 gradient? That one blew a gasket on my dad’s car.

Having grown up around horses, I find accidents all too believable. I’ve seen a team run away with their driver and trample a sports car! I’ve been thrown too, been run away with, been kicked and bitten. I’ve had a horse trip when galloping across a field and I’ve them slide in the mud and slip out from under me.

Louisa, I really like the device of any sort of accident when it’s used to force the hero and heroine to be alone together, whether it’s snowed in in a cottage, or the Alaskan wilderness, or a desert island. One problem I’ve often seen while critiquing or judging contests is not enough interaction between hero and heroine, if the writer spends too much time on a host of secondary characters. Honestly, sometimes I think it’s a way of avoiding the heart of the story. That’s not possible in a stranded-together type of plot.

Janet, I think Kirkstone pass is the one. I remember feeling like the car was doing headstands on the way down.

Diane, those stories sound fine to me, and Isobel, I’m not surprised you have more stories to back up my theme. 🙂

I find them realistic. My mom’s cousin received a serious head injury when a horse she was on bolted out of the barn, and the cousin hit her head on a beam.
My daughter injured her hip when she was pulled off a horse by another one she was leading. She was on the ground in the woods almost a half hour before they found her. At the time, they told her her hip was bruised and sent her back to work riding and hiking. 15 years later when she is having problem with the hip, x-rays show it was actually a minor fracture not a bruise.
Horses are large, powerful animals. It is a long way to the ground when you fall, and if you land wrong, the results can be disastrous. Hitch them to a carriage and anything can happen.