The images in this post are from my copy of GWM Reynold’s Penny Dreadful series, Mysteries of London. The publication of the series spans the period from about 1837 to 1844.

I apologize for the images: I don’t have the correct lens for these kinds of pictures, and I didn’t want to scan them because then I’d have to lay the book flat and further break the binding.

There are readers (and authors) with strong opinions about cross-dressing heroines. I have heard some people state categorically that such historicals are wildly inaccurate. That might be true. Depends on the book, I suppose. Below is an example of a cross-dressing heroine for a story that opens in 1831. It is, in fact, the opening of the wildly popular and successful Mysteries Of London, a series that made GWM Reynold’s fortune, by the way.

Obviously, the popular culture liked some ladies dressed as men. 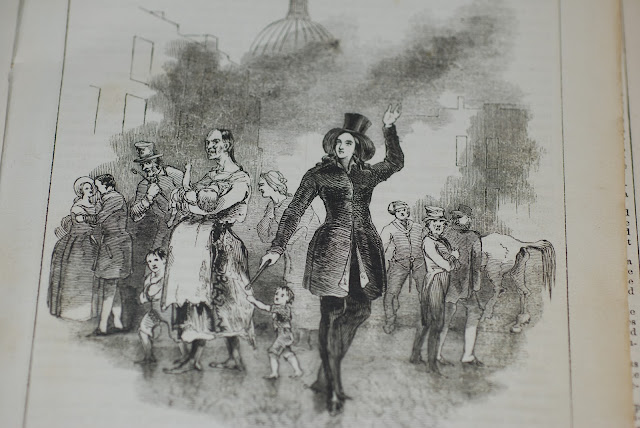 There are many other interesting things present in this illustration (above), such as the smog. The horse’s ass is another. It has, I’m pretty sure, just relieved itself. Or maybe is actually in the process. Then again, as you’ll see, there are many tricks of shadow.

Keeping in mind the choices the artist made, note the pregnant woman in tatters with three young children and just to left, a plainly well-off couple. What does that suggest about the consequences of poverty and a woman not being able to control her fertility?

Ah, the cross-dressing heroine. Her hair is down, which seems odd if you wish to be taken for a man. The “meta” conversation about this illustration is to what extent the illustrator either deliberately, by instruction, or sub-consciously, drew a figure that possesses so much of the feminine that I look at that picture and say, yeah. Chick. Not fooled.

It’s interesting, I think, that so many of the figures appear to be looking at her and they don’t look happy. 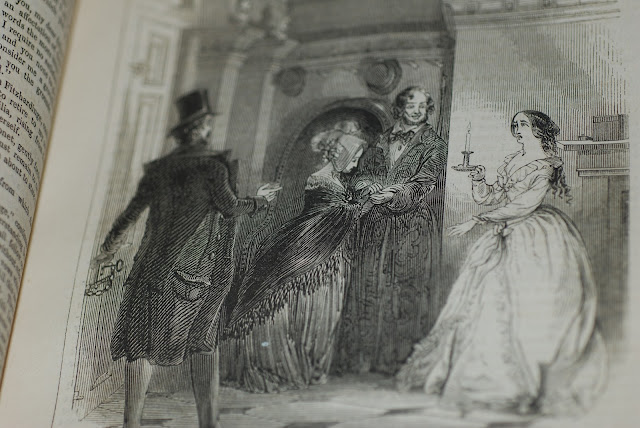 Sorry for the poor quality. Too lazy to go take a better one. However, this picture (above) fascinates me most because of the hats hanging from pegs above the door.  This is a well-to-do home. Now, how handy is that? Pegs for the gentlemen’s hats? So much for the butler carrying away the hats. Maybe in the really rich houses.

Note as well the key in the door to the left. Keys in the doors. Yeah.

Hmm. What messages might there be in the next two pictures? 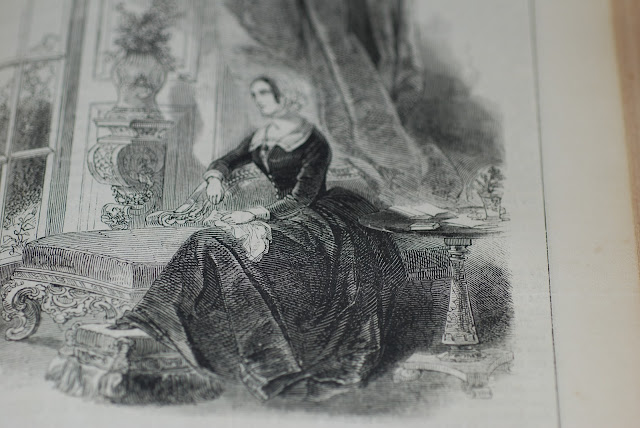 In the picture above, there are obvious things such as the house, surroundings, the woman’s position and posture that tells us she’s wealthy and a lady. The table next to her has books and a flower. Itty-bitty flower and flower pot, which is interesting.

I don’t think I’ve ever read a historical where the flowers in a room were anything but large bouquets. In this book, however, there are plenty of examples of small pots containing very small greenery. They show up in several of the illustrations. 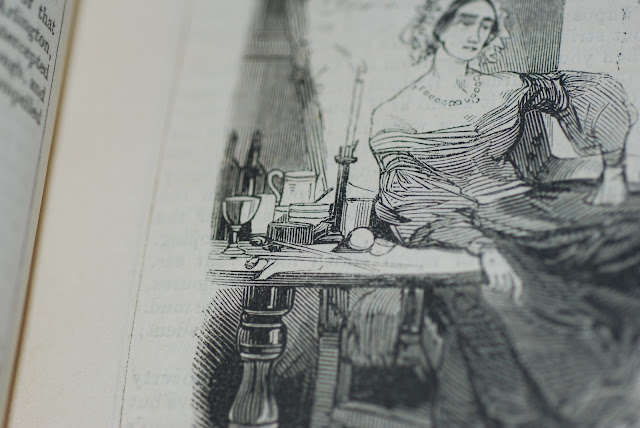 Well. The woman above is NOT a lady. So say I. Because, look at her. She’s not sitting up straight and the upper bit of her gown looks to be about to fall off any minute. And what’s that on HER table?

No books. Alcohol.  I believe in the foreground those are pipes. This is not a neat table. It’s cluttered. She has been drawn so that she looks dissolute. And thus, we see the signs of dissolution.

The LADY is plainly thinking wistful thoughts. Oh, Howard, how I miss you, my darling. I cannot even read my book without you.

The NOT A LADY does not look wistful. She looks tired. (I will represent to you that in the rest of this illustration there is a man standing by the fireplace.) She looks like she’s thinking: If that asshat asks to see my tits again, I’m going to smack him. Why doesn’t he ever ask if I want a foot rub? Oh, fuck it, I want a drink.

The Case of the Missing Package 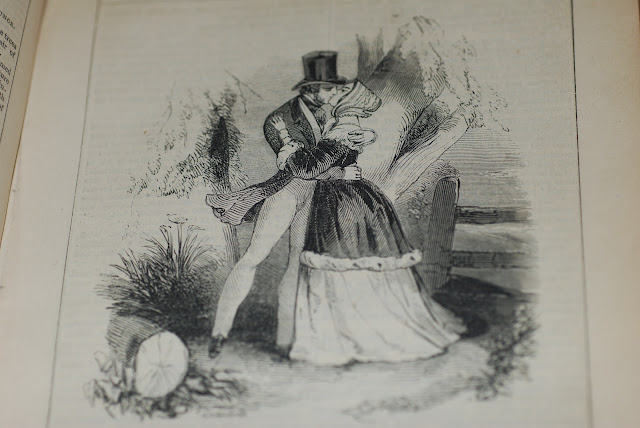 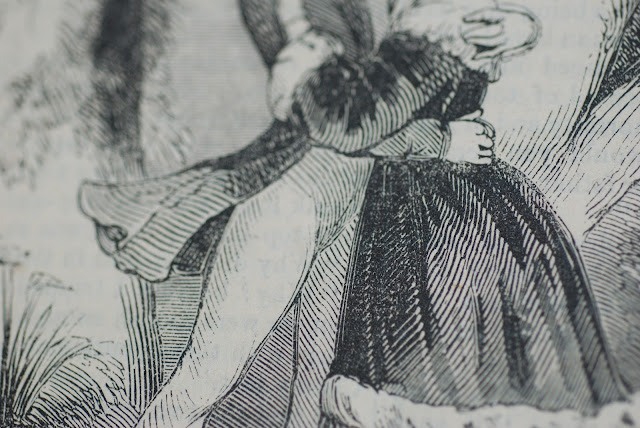 Where the hell is his dick?

That’s some fine tricks with shadows.

What do YOU think?

I’m thinking that your posts are hilarious, Carolyn!

Such a funny post, Carolyn. JoBev’s My Lady Notorious has a cross-dressing heroine at the start of the book, and the hero realizes she’s a girl due to, yes, the lack of a package in her breeches. That book has continued to be very popular, despite the cross-dressing heroine. Then again, the heroine has donned this as part of a desperate diguise. She doesn’t like to be wearing men’s clothing.

Of the fellow in the last picture…maybe he’s not that in to her….

I’ve always wanted someone to write a fictionalized account (or make a film) based on the artist Rosa Bonheur. She had a license from the government to dress as a man so she could go sketch at the Paris Horse fair. Her father left the family to go live in a Utopia. Rosa supported them by becoming an immensely popular painter of animals and landscapes. She even came to the US to be in Cody’s Wild West show, and there was a doll made in her image. She was also a lesbian, lived in a chateau, and kept a wild animal menagerie.

As to the not quite a lady with the dress falling off, perhaps she is the ancestor of all of the heroines on the covers of modern romance novels whose dresses also fall off? At least she’s indoors, while some of the ones on book covers are outdoors and look to be in imminent danger of poison ivy or sunburn if they don’t cover up.

Jane George: sometimes if you want to read something, you have to write it yourself. Just sayin.

Interesting post and pictures. Any cross-dressing characters I have come across in books have all been in disguise. None chose it as a k