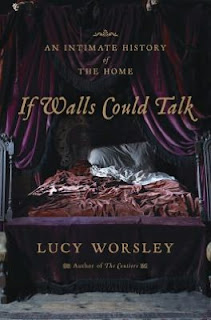 TGIF, everyone! No, it’s not Elena today, it’s me, Amanda, popping in as a substitute (I was a bit catatonic on Tuesday after a deadline…)

Even though I’ve been in my writing hole a lot lately, I have managed to get out and enjoy the early spring weather (I’ve been wearing shorts! In March!) and also reading. One book I picked up is Lucy Worsley’s tremendously fun If Walls Could Talk: An Intimate History of the Home. (Worsley is the chief curator of Historic Royal Palaces, a job of which I am deeply, deeply envious). As a fan of historical domestic trivia, I gobbled it up, and I’m hoping the series that goes along with it comes out on DVD in the US soon). It’s similar to Bill Bryson’s equally fascinating At Home, but a little more fun and anecdotal. It follows the progression of 4 main living areas–bedroom, bathroom, living room, kitchen–from medieval times onward. (just a quick note–while there are lots of fun facts as well as wonderful illustrations and lists of references, this is mostly “upper and middle class” life, not a comprehensive look at all classes…)

A few fun facts I gathered:

–It was 1826 when coiled metal springs replaced the old rope bed cords that had to be tightened often (and cotton replaced itchy wool as mattress covers). And did you know it took over 50 pounds of feathers for a feather mattress??

–Men’s underwear (drawers) began to appear regularly in the 17th century (William III was very fond of garish colors like red and green!), while women’s fashions “simply precluded wearing knickers. So ladies went commando and squatted over a chamber pot when required.” Regency fashions, with thinner fabrics and slimmer silhouettes, required drawers, but they were still Not Talked About. Here’s an account of what happened when, on a walk with friends, the Duchess of Manchester went keester over teakettle over a fence in 1859: “The other ladies hardly knew whether to be thankful or not that a part of her underclothing consisted in a pair of scarelt tartan knickerbockers which were revealed to the view of the world in general”

–In Tudor times, a medicinal remedy for a frigid wife was to run “the grease of a goat” on her ladyparts. This seemed to help–though probably not for the reasons they thought (that a goat was lusty, therefore this would transfer the goat’s characteristic to the people). Enemas for constipation were administered via a pig’s bladder attached to a tube–one night Henry VIII used this remedy and it was reported he gave his velvet-covered toilet “a very fair siege.”

–In medieval times people actually bathed quite frequently, washing hands and faces frequently and taking soaking baths with various herbs (bathhouses became quite popular when knights brought the Middle Eastern custom back from the Crusades). But the “dirty centuries” began about 1550 and lasted to about 1750, “during which washing oneself all over was considered …to be weird, sexually arousing, or dangerous.” Also, to get stains out of linen, a great bleach was urine…

That’s just a small touch of what can be found in this book! There is stuff about dentistry, makeup, toilets/sewers/toilet paper (“stool ducketts” were squares of linens used in Renaissance bathrooms), cluttered living rooms, heat and light sources, food and drink (the once-rare luxury of tea; the constant state of at least mild drunkeness in the Middle Ages), and so much more. It’s such a fun book.
What have all of you been reading while I’ve been buried here at home???

I haven’t read the book but I did see the tv series when it aired here and it was fascinating. Lucy Worsley also did a documentary recently ‘Elegance and Decadence’ about the Regency era which was also brilliant.

And I totally agree, I would love her job.

I keep hoping these shows will pop up on DVD here in the US! They sound fascinating.

I enjoyed Worsley’s books “The Courtiers” and “Cavalier” too…

I’ve been reading Meljean Brook’s Heart of Steel and Faith Hunter’s Raven Cursed, both awesome books, but not Regencies

I’d love to see this series as well. The book sounds like a great read. I recently got the DVD of season one of Game of Thrones and I found it fascinating viewing. Haven’t read the books yet.

Just finished Louise Allen’s Married to a Stranger and I really loved it.

Has anyone succumbed to the lure of the hype and read Fifty Shades of Grey yet?

LOL–not me, I am so far behind the curve I just read “The Hunger Games” trilogy not too long ago 🙂

Oh honey, you’re ahead of me! I haven’t even read The Hunger Games!

You always make your research reading so much fun. You’re a wallet lightener for me.

I’ve just been running through some of the “easier” books in my TBR mountain. Nothing nearly as exciting as IF WALLS COULD TALK. This is the type of reading that fascinates me. I have popped over to Amazon and put it on my Wish List. One of the things I enjoy about reading historical fiction is picking up the period tid-bits so many authors include in their stories.

Thanks for an interesting post and the information on the book.