The Idea Elf and the Plot Fairy

I’m following Caroline’s lead in the business of shameless self promotion by showing you the book trailer I made for Dedication:

And now we have that over with, I’ll share the secrets of my plotting process with you. First of all, I have a visit from the Idea Elf. The Idea Elf whispers in my ear something like “Why don’t you write a book about …” and then his colleague, the Plot Fairy, comes to visit. 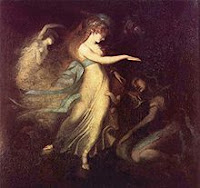 Yes, really. They are little people dressed in green and the Plot Fairy has lovely gauzy wings. They flit. They are cute. The Idea Elf tends to come around when I’m halfway through something and I have to tell him to go away and then he sulks. The Plot Fairy is a shy and wondrous creature whose visits are always unexpected and infrequent. I don’t know why the Idea Elf is male and the Plot Fairy female but it provides an excuse to post a pic of Orlando Bloom (who isn’t nearly as pretty as himself and the Idea Elf is rather more sort of green and wizened).

So here’s the latest from the Idea Elf:

Downton Abbey done right in the Regency: a houseful of conniving servants, upstairs-downstairs love affairs, and then … a body in the library (the butler done it with a blunt instrument!) … missing jewelry … a rude parrot … trapdoors … secret passages … a gaggle of women invited by the hero’s mother to try out for the position of bride … I’m actually writing this one and where is that Plot Fairy when you need her?

A terrible virus attacks the hot Dukes of Regency London, turning them into small brown dogs. The plucky heroine, an amateur scientist, joins forces with a renegade doctor to save the flower of England’s aristocracy but her heart is torn between him and a hot Duke whose DNA may provide the cure.

Now, are there any of these you’d actually want to read?

That book trailer is so cute!

I love the first idea – there’s lots of opportunity for the anguish and self-flagellation of unrequited love. I honestly love misery in romances, I do. The guy could even be the kind who likes all women to sorta be in love with him and he encouraged her and continues to flirt with her. She could begin to see through him bit by bit on the honeymoon. And then another man is introduced, mysterious, possibly no good, who is a threat to the first guy’s fortune somehow. Only the reader can see that he’s a perfect match for Miss A. Only, if she falls for him and aids him in his quest, her dear friend B will be ruined. Yes, I would love to read that,lol.

Thanks Susan in AZ!

Jane, I think the interesting thing about that idea is how many different directions it could take. My idea was that Mr. C would feel guilty and try to fix her up with all the friends they visited (since that’s the structure of the honeymoon), possibly with dire results.

I do so love all fairy tales. Cinderella was the best. Did you know that there are over 300 different Cinderella venoisrs and nearly every culture has one? I used to teach a storytelling unit to my 7th grade English classes. I also had a book of Hans Christian Anderson stories. They were dark and frightening. The Red Shoes is one that I remember. When my sister was little we had the book Princess Penelope’s 365 Dresses. She was a spoiled princess who had a different dress each day. Until the day that her father taught her a lesson and refused to make any more. She saw the lowly kitchen maid wearing the same dress every day and learned the lesson that not everyone was as fortunate and was happy with what they had. Also read the Paperbag Princess to my own daughter as a great story of a strong female character who could take care of herself. Thanks for the chance! Enjoy the day! Erinenjoytheday@tesoritrovati.com

Janet, I think Idea 1 is a terrific one! My original thought was, “How could she solve this?”

But I’m so impressed that you came up with ALL the ideas. I am very idea challenged. My Idea Elf is reclusive and very taciturn. My Plot Fairy must be flitting around with yours, too. They have a tendency to flutter away.

That ‘fixing up’ scenario would be hilarious. Let me know when it’s out!