My Regency “friend” Harriet, Part I 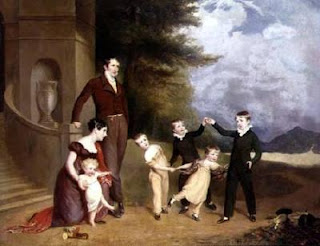 I’ve been continuing to work my way through the Letters of Harriet, Countess Granville. She was the daughter of the 5th Duke of Devonshire and the famous Duchess, Georgiana and her letters are full of interesting tidbits. However, they’re not an easy read, because she used so much French (alas, I took Spanish in high school) and there are gaps in the story (when she was together with her siblings there was no need to write letters). I also wish there were more explanatory footnotes. Since she wrote mostly to family, she used a lot of nicknames. I know some of them: “Hart” is her brother, who became the 6th Duke of Devonshire, “Silence” is Lady Jersey, “Poodle” must be the dandy Poodle Byng, etc… But there are still places I get confused about persons or events she writes about, which would have been clear to the friends and family with whom she corresponded.

But despite that, I really like Harriet and I can easily relate to her feelings about family and society. Born into high society and then married to Lord Granville, a politician and diplomat, she did quite a bit of entertaining and seemed to enjoy it to some degree.

Here’s a snippet from a letter from London in 1819:

“My ball was as pretty and successful as possible. My front room was as light as day and the back all pink muslin and flowers. The two large rooms below were filled with little round supper tables, and all the flirtations went down to back their sentiments with soup and entrees. They danced with spirit till six o’clock, when Colinet said he could play no more.”

But it’s also clear that she found the pace of fashionable life wearisome at times. Here she writes about a day spent with Lady Jersey in Paris:

“At two o’clock yesterday morning Lady Jersey called for me, and we never stopped to take breath till eleven o’clock at night, when she set me down here more dead than alive, she was going to end her day with the Hollands.

We began by a bonbon shop, where she spent much time and money. Then to a china shop, ditto. Then to St. Mande, where we found the Morleys in great spirits… Our next move was to the Cadran Bleu, where we found Granville and Lord Jersey waiting for us, and where we had an excellent dinner, which being swallowed, we ran across to the Theatre de la Gaite, saw ‘Le Bouquet des Poissardes’, a gay sort of melodrame, and then got in time for the ballet at the Opera, and Lady Granville said, ‘Can this be I’?”

Everything does sound fun, but a bit much for one day!

Harriet’s marriage was a happy one. She loved her five children dearly and missed them when parted due to social and political obligations. Here she writes from the country before departing for London for a fall session of Parliament:

“I cannot endure the thoughts of Monday fortnight. I am so happy here. My health also seems to profit by every mouthful of air, and the misfortune is that there is scarcely anything in London to weight against all I enjoy here. Breakfast by candlelight in a fog, no interest strong enough to make society piquant, no time for air and exercise, away from my chicks.” 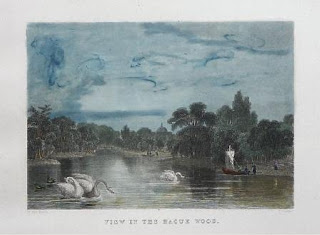 She enjoyed the slower pace of life in the Hague (in the Netherlands), where her husband served as ambassador.

“Yesterday was a happy day. In the morning early I walked with my blooming daughters on the Vijjverberg, where we had the whole advantage of bright sun and air soft was May. I then came home and received a cadeau of three plover’s eggs in a little box… At two we drove in the curricle (Granville having for fifty sovereigns bought two little grey horses), to the sea and walked on the sands.”

Apparently this life made her reflect on the London season, as she wrote to her sister:

“…I did not know myself what a London spring was to me. You have never had to encounter it in all its plenitude, and the unwearied dissipation and nightly sittings through it all. The little pleasure and the gnawing anxieties must be looked at afar to see them in their proper light.”

I feel a sort of sympathy with this attitude. I like the occasional concert or party but I truly love quiet times with family and close friends, the sort of thing that would be boring to write too much about, but a major part of my characters’ happy endings. This picture of the Granvilles at the top epitomizes that to me.

If you were a Regency heroine, what would be your ideal life: a fashionable whirl, a quiet life in the country, or some sort of mix?

I agree a mix would suit me! A nice balance between the two. Doesn’t Harriet sound just like any one of us? Very easy to relate. I think it proves what those of us writing historical fiction have to base it on –that basic human personalities transcend the times we live in.