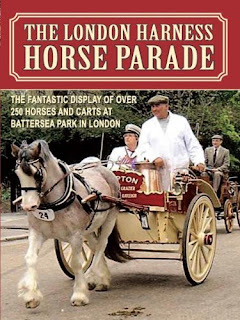 Today is Easter Monday and a Bank Holiday in the UK and a day of many festive holiday customs. I’ve written before about “Ball Monday” and the Hallaton annual “Hare Pie Scramble and Bottle Kicking match.” Here is another Easter Monday custom: The London Harness Horse Parade.

When the first parades were held, harness horses were crucial to the transport of people and goods throughout the UK, but with the advent of the automobile, harness horses diminished in use. The early Easter Monday parades had, at their peak, over 1200 horses participating. Now the parade consists mainly of hobbyists who come to display their horses and vehicles. There are some “working” horses, such as Harrods’ Fresians, those of Cribbs Undertakers, and the Shire horses from the Youngs and Fullers Breweries.

I wish I was there to see all the horses and their vehicles, everything from donkeys to the Clydesdales or Suffolks.

Here’s the next best thing!

You can even buy a video of the event! (and I’ll provide the link as soon as my internet stops being wonky)

I’m returning from Williamsburg and an Easter visit with my in-laws. What are you doing this Easter Monday? Where do you wish you could be?

Oh! I wish I was there! Instead, I’ll be spending the day doing catch up work and editing.

Does most of the world celebrate Easter Monday? Why is it that we don’t here? Easter parades here are on Sundays instead.

I spent my Easter weekend with a performance of Handel’s Messiah on Friday evening and singing in the three services at church on Sunday morning. With rehearsals and such, it was a very busy week and weekend.

We should both go next year, Judy!!

Keira, your weekend sounds busy but lovely. There’s something wonderful about singing in a chorale.

Jane George, glad you are excited.

I’m home from Williamsburg, safe and sound, and vegged out the whole rest of the day.