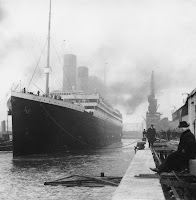 When I was about 8, I happened to catch the movie A Night To Remember on TV, and I was totally hooked on the story of the Titanic! I ran out to the library and started reading everything I could about the tragedy. And April 14-15, 2012 marks the 100th anniversary of the sinking. Here are just a few interesting little facts I found about the ship:

–The ship struck the iceberg at about 11:40 pm on April 14, and took about 2 hours and 40 minutes to sink (15 minutes to get to its resting place on the bottom of the ocean). There were no binoculars in the crow’s nest lookout, so time from sighting to impact was about 30 seconds

–Most passengers had to share bathrooms (the only rooms with private bathrooms were the two uber-expensive promenade suites in 1st class), but in 3rd class there were only 2 bathtubs for 700 people

–Though there were 4 funnels, only 3 were functional; the fourth was only for aesthetics

–There were 20 lifeboats, 14 with a capacity of 65, 2 with a capacity of 40, and 4 collapsibles that could hold 47. If the boats had all been launched to capacity (which almost none were), they would have held 1178 of the 2201 aboard. As it was 711 were rescued. (Luckily the ship had not sold out to its full capacity of 3547). This seems shockingly inadequate to us today, but it actually exceeded Board of Trade requirements. The thinking was a) they needed the deck space for passengers to stroll around, b) even the ship sank, it wouldn’t be very fast thanks to the watertight compartments and the boats would only be for ferrying passengers to rescuing ships.

–The first film version of the disaster was made about a month later, starring actress and survivor Dorothy Gibson. For her star turn in Saved From The Titanic, she wore the actual gown she was rescued in, but the prints were destroyed in a fire a few years later.

–It’s long been thought the last song the orchestra played was “Nearer My God To Thee,” but survivor Harold Bride stated that it was “Autumn”

–There were lots of famous names and robber baron types aboard, but two canceled their trips at the last minute–JP Morgan and Milton Hershey

–If you want to own some Titanic stuff for yourself (and have room for stuff like a deck chair, a part of the bulkhead, and a cherub from the staircase), there is an auction of Titanic items tomorrow in Richmond, Virginia

Are you interested in the story of the Titanic? What are some of your favorite things about the disaster, or the whole Edwardian era??
And on a whole different note, be sure and enter my contest to win a copy of my may release, The Taming of the Rogue! It will be going on until the end of today…

But there’s only one deckchair. How can you rearrange one?

I find the interest in Titanic rather ghoulish. I don’t think there’s much to celebrate in an event where so many people died.

They commemorated the sailing of the Titanic yesterday in Southampton, where many of the crew came from:

The movie that captivated me was the 1958 version of Titanic with Barbara Stanwyck, Clifton Webb and a very young Robert Wagner.

I think it was the heroism and tragedy of the men who remained behind, knowing they would die that struck me.

There’s a fascinating story of a man who did survive, much like Rose in the latest Titanic. He was from the Washington DC area and was a writer. Here’s the article
http://tinyurl.com/7orz3lm

I’ve always been oddly fascinated by the Titanic, and I think I’ll probably end up doing something to commemorate it on Saturday night.

The literary sci-fi/fantasy convention I’m considering going to Saturday in the day has a Titanic murder mystery that night. And a local community centre is also doing the last meal and costume event. That sounds neat.

I am thinking about doing the dinner thing myself, if they have any spots left! I have a dress I could wear, a copy of one of the “Titanic” costumes…

Janet and Diane, thanks for the links! They were fascinating. I also love the story of the Straus couple, the elderly man and woman who had been married for many years (I think they were one of the founders of Macys, and they were on their way home after visiting their first grandchild in England). She stayed with him when he couldn’t board a lifeboat…

I’ve always been fascinated by the Titanic and her tragic story. I heard there is a cruise liner that is remembering the event by following what would have been the Titanic’s voyage. I wish I could be there.

Thank you for the informative post. There were quite a few things I hadn’t heard before.

There is a Titanic attraction in Gatlinburg, TN which isn’t far from us. They are planning a commemorative event with a concert this weekend. We won’t be going. The sinking of the Titanic has always brought me such sadness. The heartbreak of having loved ones die, either left behind on the ship, or slipping from your grasp in the water is overwhelming. The pictures of the bodies of children recovered from the ocean is too much. I can’t imagine what the rescue boat crews must have gone through pulling so many onboard. The shameful behavior of the captain and crew is a sad comment on their character.