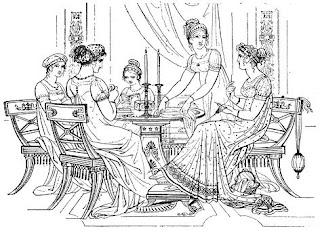 Last week I blogged about the Letters of Harriet, Countess Granville and how I could relate to her feelings about the fashionable life versus family life. We’ve sometimes talked here about what we would ask Jane Austen if some time machine made it possible for us to meet. I think I’d be so intimidated that I would either clam up or start babbling like Miss Bates (and probably end up as a comic secondary character in her next work). Harriet feels more like someone I could drink tea and gossip with, though like Jane Austen, she could indulge in a bit of snark:

“It is said here that Mr. John Grefuhle is to marry Emily Rumbold. He is
immensely rich, good-looking and gentlemanlike, and quite English in his manner and language. I hope he will, for she is a good girl, I believe, and she has tried all Europe in vain for a husband.”

“Mr. Chichester has fallen deeply in love with Lady Harriet Butler, and it is supposed will propose at my ball. Edward Montagu whips up a little love and
despair upon the occasion, which will do none of them any harm.”

And here’s a character sketch I found intriguing. It feels like a spoof of our typical cynical Regency rake:

“I admire F. Lamb perhaps more than I like him. I think him uncommonly agreeable and clever, but he sees life in the most degrading light, and he simplifies the thing by thinking all men rogues and all women ——-. He looks old and world-beaten, but still handsome. He seems to enjoy being here, and sport, food
and sleep fill up his time. At any spare moment he reads ‘The Heart of Midlothian’, of which he says: ‘Why, if you wish for my opinion, I think it the worst novel I ever read.’”

What historical Regency personage would you like to chat with?

The Regency person I most want to chat with is the Sir Arthur Wellesley (later the Duke of Wellington) and Lord Castlereagh.

Oooo!
Can I join that conversation, Susannah? Those are the two I would have picked, too.