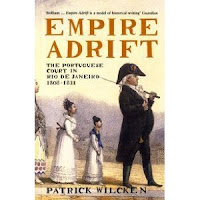 Happy Tuesday, everyone! It’s been weird around here the last few days, what with ducking tornados (that luckily didn’t come too close to my town–it’s always exciting here in Oklahoma in the spring!), battling a cold, and writing. But I enjoyed the time to hole up at home with a new box of book bargains from the Edward r. Hamilton catalog.
One of the books I ordered this time was Patrick Wilcken’s Empire Adrift: The Portugese Court in Rio de Janeiro, 1808-1821, and I loved reading more about this strange tale. I knew almost nothing about what happened to Portugal during the Peninsula Wars–it always gets overshadowed by Spain, and I don’t know much about the history of that country in general. One review quote called this “A brilliant account of a bizarre yet momentous event.” In 1807, the Portugese prince regent Dom Joao (regent for his mad elderly mother Queen Maria), with the French closing in on his country and the British bossing him around, decided to just pack up his entire court and government and go to his colony in Brazil to rule from there. Over 10,000 people hurriedly climbed aboard a fleet amid chaos and confusion, and after a dangerous, stormy voyage emerged in the tropics. They stayed there for 13 years, in a weird attempted recreation of their life in Lisbon amid the jungle. In addition to trying to rule an enemy-occupied country from across the ocean, they also contended with a highly disfunctional royal family (Dom Joao and his ambitious Spanish wife, Dona Carlotta, had long been bitterly estranged, even though they had 9 bickering kids, and their quarrels only got worse in the New World). 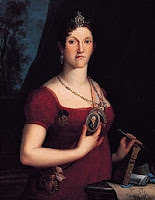 I couldn’t help but imagine a story set amid characters like this! What would a European woman think of life in Brazil? How would she adjust? (the heir Dom Pedro’s bride, the Austrian archduchess Leopoldina, at first romanticized what life in the “innocent” new world would be like, but soon came to hate it, along with her husband, and long for her home). It was a fascinating story, one I enjoyed learning about.
What are some stories from history you were surprised to learn about? If you had lived in the Regency period would you have been brave enough to make a run for South America??
Posted in Regency, Research | Tagged Empire Adrift, Portugal | 3 Replies
0 0 votes
Article Rating
Subscribe
Login

Amanda, I am glad the storms missed you. I think I would have an underground house if I lived in the Mid-West. We had a small tornado hit here last Spring and NE TN is not prepared to deal with them. There are few houses with basements and fewer storm shelters, although people are now installing them. I hope this season isn’t as bad as last.

I had never heard of this Brazilian connection with the Regency. I think very few men or women were prepared for what the new world held for them. It was so very different from what they were used to. I am sure they built an outpost in the jungle and surrounded themselves with the trappings of the life they were used to. Until that was done, I’m sure there were many unhappy people.

I was not aware of the Edward R. Hamilton company. I am going to check it out and see if they have anything I might be interested in. Thanks.

I get so many fabulous deals on research books at Edward R Hamilton! I love them. 🙂 (just bought a gorgeous book about the crown jewels too…)

It turns out Rio was actually already a fairly well-developed city (there were lots of settlers in Brazil, and it was a center of new world trade, especially after a minor gold rush inland). The royal family seized the nicest houses from the viceroy and wealthy traders, and then set about building new palaces and theaters and such. It was a strange and fascinating story…

Amanda, I think you need to write that story. A Regency heroine would need a compelling reason to go to S. America but coming up with motivations is part of the fun…

Those Edward R Hamilton catalogues are so much fun!