Dedication: A blast from the past and contest 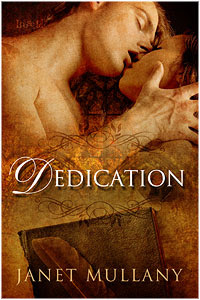 It’s a historic day–actually two days ago it was a historic day when the digital, rewritten, heated up (but it was always hot) new version of Dedication was released.

Isn’t it a fabulous cover? You can buy it here and watch the book trailer here.

Just for giggles, I’m reposting excerpts from the original Riskies interview from 2005 when the first edition (strangely a Signet Regency–a trad!) was released, when this blog was a mere infant. Updated comments in this color.

The first scene–that of a man knocking at the door of a London house early in the morning– came into my head strongly enough that I was able to build the plot and characters from there. I don’t know why it works this way for me, but it does. Heck I wish it still did. Somehow that was very evocative.It’s one of those classic beginnings, like the hero leaves town and/or the stranger comes into town: think about how many books are constructed like that.

Q. How long did it take? Was this an easy or difficult book to write?
It took years, the luxury of the first book! It was a much revised book, but it was always easy to write. It began first as a single-title regency set historical, and had a rather convoluted plot. Adam was a codebreaker for English intelligence, and Fabienne his major suspect as a spy. I also had the villain eaten by Adam’s pigs, something I’ve always regretted losing. I had a near miss with an editor who suggested I drop the spy plot and make it more a comedy of manners, so I revised it and she rejected it via form letter (one of those character building moments). It was never was a comedy of manners, and it continued to bomb until it won the 2004 Royal Ascot Contest (sponsored by the Beau Monde) and Signet made me an offer for it later that year. I had to chop off 20k words, so the subplot almost disappeared, but at least almost all the sex stayed intact! Then I got the rights back and dithered around with it, missing the phenomenon of self-pubbing by selling to Loose-Id. I rewrote fairly extensively and restored some of the subplot and expanded upon the sex. I repaired, I hope, the gaping hole near the end which reviewers kindly attributed to the drastic shortening of the book; it wasn’t. It was a combination of me galloping to the finish line and being a lousy plotter. Anyway, with this version you get, er, more bang for your buck.

Q. Tell me more about your characters. What or who inspired them?
I’ve no idea where Fabienne and Adam came from. I think they were based on what I didn’t want to write about or read about. I was interested in characters who had had experience in life, including good relationships with other partners, friends, and family, and who had not been holding grudges or harboring revenge plans for decades. In other words, fairly complex and healthy people, who were mature enough to solve their own problems but were also human enough to make mistakes. So that’s how I ended up with a heroine in her late 30s and a hero in his early 40s, both widowed. And that was really unusual seven years ago, amazing though it may seem. I had to have a hero of a certain age with viable sperm, it’s central to the plot, but I think he’s one of the sexiest men I’ve written (glasses, cries a lot, nice hands–my sorta guy). And in this version I could actually show Fabienne with one of her lovers, something that was only hinted at in the original version, because in 2005 only minor female characters had an adventurous love life and they usually had to pay for it by coming to a sticky end. Sadly, the double standard is still with us, I think.

So the contest–I’ve told you about Adam, my favorite hero. Now tell me about your favorite sort of hero. Easy. I’m giving away two downloads of Dedication as prizes!

The fine print: You must include a “safe” version of your email address, eg riskies at yahoo dot com in your post. I will announce the winners here on Saturday morning, giving you two full days to tell your friends about this fantabulous contest. I will email the winners directly to ask about formats. If I don’t hear back from you within a week you’re toast. Sorry! 18 and over.

You know I’m a sucker for the nerdy professor (why have I never written one?!). Don’t enter me into the drawing, I’m off to buy this now!

Thanks Isobel! He’s actually a former math professor, a remnant from the version where he was a code breaker.

Sounds GREAT! As soon as my Kindle arrives I’m getting it! (I have a Nook Color, which is lovely for magazines and stuff but I don’t want to stare into a bright screen to read, and the battery is pfft. So I finally forked over for a Kindle.)

Isobel, I can’t wait for your nerdy professor too. *heart*

I love a lot of different kinds of heroes, but the Scarlet Pimpernel holds a special spot. There’s just something about a snarky fop who’s also cunning and courageous.

This looks so good!!! Can’t wait to get me a copy.

Favorite sort of hero… the non-constructed hero. I don’t want to feel like his demons or whatever are pasted on for the sake of making dark and brooding or some crap. I don’t want to feel the author’s hand in him at all. He needs to be fully authentic and come right off the page larger than life. And if he doesn’t have those crazy fleshy hero lips and move like a cat and waggle his eyebrows, that’s a bonus.

Congrats on the re-release, Janet! Though the original was fantastic I’m looking forward to seeing what you’ve done with it since.

My favorite type of hero.. The Unassuming hero… the ” I just did what anybody else would have done.” ( but nobody else did!)

Great cover, Janet. I will get this new version on my Kindle!!!

Gorgeous cover! I actually haven’t read this in any form so I am truly looking forward to it!

I like a hero with hidden depths. I love a hero who has everyone fooled. They think him careless or the funny guy or the quiet unassuming sort and you find out he is actually SO much more than that.

Glad you got the chance to expand – you develop your details in such a fun way! My favorite heroes…hmmn – very hard to define. I know them when I see them. I think they are strong and we know it but they are very aware of their weaknesses rather than their strengths so they lack confidence. We, the reader see how great they are but they don’t. Obviously fictional – men are so much more aware of their strengths, even the imaginary ones.