Long ago when I was writing The Wagering Widow, I created a fictitious gambling house run by “Madame Bisou.” I used the gambling house again in A Reputable Rake and Innocence and Impropriety. So, as I was starting my new gambling house story, I resurrected Madame Bisou’s establishment. Why reinvent the wheel?

Gambling houses or gaming “hells” appear often in Regency romances, but what were they really like?
The History of Gambling in England by John Ashton gives us a good idea.
Ashton quotes a 1817 pamphlet that describes some of the actual gambling houses of the period:

BENNET STREET, ST JAMES’S. CORNER HOUSE–RED BAIZE DOOR–called A CLUB HOUSE: This is what is called a topping house, where high rank and title resort. We mentioned in the poem (the Annual Register also included a long poem about gaming houses) the luck of a certain Duke’s son there; and, of late, there has been a lucky run in favour of the frequenters of the bank–but lauda finem. Its crisis has arrived. The noble  Marquess, on the night that he lost the money at No. 40 which was closed against him, went full charged with the Tuscan grape, and attacked poor Fielder, vi et pugnis, and, at length, was necessitated to leave this house also….The receipts of these houses are immense: We know the wife a proprietor of a hell…who was so majestic in her attire, that she gained the name of Proserpine.

MRS. LEACH’S, No. 6 KING STREET, ST JAMES’S: is a particularly snug and quiet shop, and the name of the proprietor is singularly appropriate. This concern is suspended.

THE ELDER DAVIS, No. 10 KING STREET, ST JAMES’S: Is but a small affair, recently opened. It gets on swimmingly. 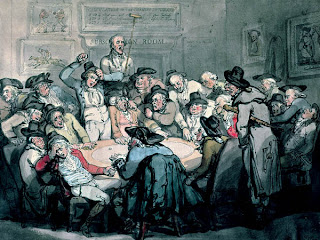 Most of the gambling houses had a Hazard Table. Hazard is a dice game, the precursor to Craps. There is some strategy involved in which numbers the player selects to role, but it is essentially a game of chance which always favors the house. Some houses had other games of pure chance like Rouge et Noir and Faro, both played with a deck of cards.
Gaming houses could make vast fortunes with these games of chance as this description states:

My fictional gambling house needs to make lots of money quickly, so needless to say it specializes in games of chance!
Do you like gaming hell stories? What are your favorites?
Did you ever read the traditional Regency (a Signet, I think) that had the villain taking secret photographs in a gaming hell at night? Great research on that one….
Don’t you love the smattering of Latin and French that crops up in some of the writings during the Regency?
Posted in Regency, Research | Tagged gambling, gaming, gaming hells | 7 Replies
0 0 votes
Article Rating
Subscribe
Login

I enjoyed The Wagering Widow, Diane – and used it as research for a gaming scene [very brief] in one of my stories. I need to do more research on Regency era gambling. I also enjoyed the gambling scene [set rather earlier] in Georgette Heyer’s Devil’s Cub.

What a compliment to me, Beth! I think that is the first time someone used my book as a research source. I assure you, I did my best to make it accurate!

Yes, I do like reading about the gaming hells in Regency. If I do run across any Latin or French, it just gives me more to learn. Love those rakes!

I LOVE The Wagering Widow and stories set in gambling hells are always intriguing. There is something about gambling that brings out characters’ true selves – the desperation, the bravado, the courage and everything in between.

I loved the faro house (?I think) in A Little Folly by Jude Morgan. Diane, we must find the title of the Regency with photography–I want to read it!

Artemis, I love the French and Latin, too!!

Louisa, I am intrigued by gambling houses, too, obviously, since I am returning to Madame Bisou’s yet again.

Janet, I remember the story. The heroine was raised in a nunnery in England, from which she ran away (I forget why). The nun who had been her main caregiver went out after her. And the villain (or was it the hero) somehow took secret photographs in a gaming hell at night.

The few times I’ve tried gambling I was rather bored by it, so I haven’t felt drawn to do the research it would take to write about it. But the setting and the motivations are intriguing. I liked Faro’s Daughter by Georgette Heyer and Cara King’s My Lady Gamester.