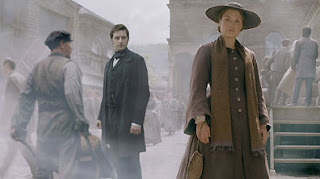 The book jacket of my edition of North and South states that “Critical generalizations about Mrs Gaskell have tended to portray her either as an essentially feminine novelist, full of charm, tenderness and little else, or as a pioneer of the ‘social problem’ novel. Neither view does sufficient justice to her best novels…”
I agree. This book should not be pigeon-holed based on either the romantic elements or the social issues, but apparently, this sort of categorization was happening long before bookstores divided books into “romance” and “fiction.”  Personally, I love how Gaskell fused these elements in this story. Characters don’t exist separate from the issues of their times.
When I first joined RWA, I heard a lot of advice on how to write the romance that sells, which included “No saving the whales”, i.e. don’t address any controversial issues. At the time I was glad that my Regency ideas were tugging more strongly at me, since my only idea for a contemporary romance involved marine biologists.
The purpose of a romance novel isn’t to preach, and I do understand the marketing rationale involved, but this feels very limiting. I like a romance where the characters have more interesting goals than the pursuit of wealth or sexual pleasure for its own sake (though even those goals can be interesting if it turns out they mask something deeper). They could be less controversial goals like caring for family or solving a mystery, but they could be the pursuit of a cause, as long as it’s integral to the characters.
Some of our Risky books and other historical romances have done this. I suspect social issues are a little easier in historical romance, since the issues have changed form in modern times. I doubt anyone in mainstream society would openly support slavery. But I think things like this are still with us in many ways, so maybe touching on them in historical romance is a subversive way of addressing them.
Anyway, maybe the industry prohibition against issues is thawing. I can’t remember when I read that there were some romances that dealt with wildlife preservation. I made a mental note to check some of them out, but life intervened, so I don’t know how well they worked. And indie authors can try things traditional publishers might not.
I think it would be tricky to have the hero and heroine on opposing sides of an issue, since it’s hard to make both sympathetic unless it’s an issue (unlike racism) where both sides have some merit and where compromise or creative solutions are a good answer. Otherwise, the cause could be something that unites the hero and heroine rather than the source of their conflict.
What do you think of issues in romance, historical or contemporary?  Any books that made the mix work particularly well?
Elena
www.elenagreene.com
www.facebook.com/ElenaGreene

Can’t think of the titles of many, but more and more social issues are showing up in the books I read. Authors have addressed abusive relationships in both historical and contemporary romances. One of the first romances I ever read was Julie Garwood’s SAVING GRACE which deals with a woman who has had an abusive husband.

Rachel Lee has written LOST WARRIORS which does an excellent job of showing how difficult it is for some veterans to ever fit back into society and what PTSD can do to them. A Soldier’s Heart by Kathleen Korbel also deals with PTSD and how veterans try to deal with it. Both books give a view not often seen of the problem. Very real and even though they deal with Vietnam veterans, the core truth extends to current returning soldiers. If people don’t understand what they are going through, it will be even harder for them to fit back into life as they knew it.