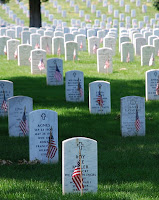 Today is Memorial Day in the USA, a day of remembrance that began as Decoration Day, a day freemen (freed slaves) decorated the graves of Union soldiers. The holiday eventually became a day to include remembrance of all who have died in defense of our country.

Most of us do not know first hand what soldiers face when they are sent into combat. We suppose their valor, their fear, their willingness to face enemy fire. We imagine it and recreate it in books and movies. I’ve certainly imagined battle for my Three Soldiers series.

Today seemed a fitting day to talk about my favorite war movies.

I’ll start with a Regency era one, of course. 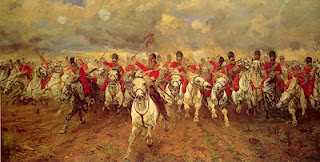 Waterloo (1971) starring Christopher Plummer as Wellington, and Rod Steiger as Napoleon. The battle scenes in this movie are magnificent. Once scene almost perfectly recreates the painting by Lady Butler of the charge of the Scots Greys. The aerial photography of the French cavalry attacking the Allied squares was incredible. I loved how the important and memorable incidents from the battle were depicted.

The Longest Day (1962) from a book by Cornelius Ryan, a book I actually read! This movie tells the story of D Day, not with, perhaps, the graphic horror of the battle as in Speilberg’s Saving Private Ryan (which I have not seen), but a great movie for its scope of the battle and its ensemble cast including Henry Fonda, John Wayne (of course), a young not-yet-famous Sean Connery, Richard Burton, Eddy Albert, Paul Anka…and more. Like in Waterloo, important parts of the battle are shown and woven together to show how the victory was accomplished.

Zulu (1964), my favorite war movie of all time!  Zulu is the true story of an attack in 1879 by 4000 Zulu forces on a small hospital and supply depot guarded by 139 Welsh infantrymen, many who were hospitalized. Narrated by Richard Burton and starring Stanley Baker, Nigel Green, and a very young Michael Caine, this movie shows true valor and celebrates, in the end, the respect all soldiers are due.

Zulu and The Longest Day are available on Netflix and other dvd vendors. Waterloo might be harder to find but is worth the search.

Notice all these movies were made decades ago. The distance in time helps me favor them. I have a more difficult time watching more recent depictions of war, especially if the movies involve Vietnam or Iraq and Afghanistan. Too close for comfort…

Here’s a Memorial Day video that literally made me cry. It was created by a 15 year old girl and is going viral on the internet.

I haven’t seen any of your list, but my favorite war movie, one of my desert island all-time top five, is Glory.

Susanna, I KNOW you would love Zulu!!!
I like Glory, too.

Last of the Mohicans pushes all my buttons…

Oh gosh! I had forgotten all about Zulu! It was one of my Dad’s favorites and one of my as well. Need to find a copy of it as I haven’t seen it in ages.

And Susanna, Glory is one of my favorites as well.

How funny you should choose this topic, O Divine One! I watched The Alamo last night (the latest version with Billy Bob Thornton, etc.)

The REMEMBER ME video by Lizzie Palmer is wonderful. It brings home just how much military service affects families. It has been the same for these families for centuries no matter what side you are on. It is the response of the public that changes over the years. I am happy to see the support the troops and their families are getting today even if the war may not be popular. I was a military wife during Vietnam and it was a very different story. The war was unpopular and that was taken out on the troops and their families. There were few parades for returning troops. More often than not, they were met by protesters and attacked. Families were left to fend for themselves with little support, understanding, or sympathy from the community. You looked forward to letters. There were no cell phones or internet connections to keep in touch either to check if they were OK or give them support. I can remember wives that had phone bills of $700 to $900 every month just to keep in touch. It was hard to go to the store at times. People would stop you and say they hoped your husband would die while serving. If he was killed in action, they would say they were glad, he deserved it.

I don’t have favorite war movies. I look at them and see a terrible waste of life. Yes, there are evil people in the world that must be stopped and war is sometimes the only way. I see no glory in the battle and loss of life on either side. I did watch SAVING PRIVATE RYAN. It is an excellent movie which probably gives one of the most accurate depictions of what combat is really like. I will never watch it again. If I do watch a movie with combat in it (like LAST OF TH MOHICANS), I want it to be depicted as accurately as possible. Don’t glorify it. Every person who dies on those battlefields has left a hole in someone’s life.

This day should not only be a day to remember our soldiers and their families plus what they have sacrificed for us. It should also be a day to be thankful that an all out war has not been fought in our country. As bad as the Oklahoma bombing and 9-11 were, they are nothing compared to what it would be like to have combat forces on the ground fighting in our streets. The sacrifices these troops have made and are making help prevent that from happening.

Like librarypat, I find it hard to watch war movies because they are so wrenching. Sometimes I watch them anyway, because many are so good, but only when I’m feeling up for them.

I watched that Waterloo film for research purposes and thought it was helpful in visualizing the battle. I thought the casting of Napoleon and Wellington was good. Too bad the film sort of tanked; I think it was trying to strike a balance between doing justice to the history and making the stories more personal and didn’t quite manage it for a big enough audience.