Spiders and other domestic matters 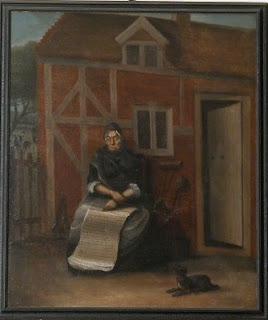 Here’s a recent portrait of me.

No, really, this is the way I feel after massive cleaning, sorting, throwing out of items in preparation for some fairly substantial work to be done on my house.

This is a portrait of Mrs. Jane Ebrell when she was 87 by provincial artist John Walters of Denbigh, one of the servants at Erddig, a national trust property dating from the 18th century whose owners liked to commission servants’ portraits (and later photographs), embellished with poems. Mrs. Ebrell, a former housemaid, was hired as a Spider Catcher, possibly as a way for the family to support her in her later years. (I have been dealing with monumental spider webs.)

My thanks to the Two Nerdy History Girls who found the text of the poem:

To dignifie our Servants’ Hall
Here comes the Mother, of us all:
For seventy years, or near have passed her,
since spider-brusher to the Master;
When busied then, from room to room,
She drove the dust, with burhs, and broom
Anyd by the virtues of her mop
To all uncleanness, put a stop:
But changing her housemaiden state,
She took our coachman, for a mate;
To whom she prov’d an useful gip,
And brought us forth a second whip:
Morever, this, oft, when she spoke,
Her tongue, was midwife, to a joke,
And making many an happy hit,
Stands here recorded for a wit:
O! may she, yet some years, survive,
And breed her Grandchildren to drive! 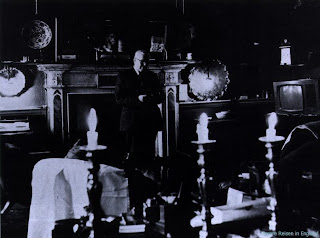 She certainly sounds better at cleaning than me. (And to whichever member of the Yorke family of Erddig wrote the poem, don’t give up your day job.) I’ve mentioned Erddig before as it is such a rich source of servant info, but I may not have told you what an excellent cake shop it has–other food is sold there, but I ate only cake. The walls of the cake shop are hung with photos of the house as it was before restoration by the National Trust. This is Philip Yorke, the last private owner of Erddig, in the one habitable room of the house before he deeded it to the National Trust (note: no electricity!). It was a real mess with subsiding floors (built over a coal mine, something I borrowed for The Rules of Gentility), buckets scattered throughout the house to catch leaks from the roof–just horrible. Happily major restoration, funded by the Coal Board and sale of some of the land, put it to rights and it’s now one of the most popular stately homes in England.

But back to my humble home–any tips for surviving renovation? If I were in the Regency and wealthy I’d just take off to one of my other houses, leaving my faithful butler in charge. Sadly that is not the case. The best tip I’ve had so far is to eat out as much as possible and label the boxes.

And a small reminder that (1) The Malorie Phoenix is now 99 cents for kindle and (2) I’d love some amazon reviews. If you’re a legit blogger/reviewer, please contact me.

Spider Catcher is a most excellent title.

And you Riskies are all, with your wits, midwives to many novels, lol.

She doesn’t look as though she’s enjoying her occupation much (“For goodness’ sake all I want to do is retire. May I stop this infernal, eternal dusting now?”) but none of the servants in the Erddig portraits do. I wonder if they saw it as a massive imposition on their time and privacy.

Good luck surviving the renovations. We bought a 1898 Victorian country farmhouse. The structure is solid, but not much good had been done to it over the years. It needed to be gutted down to the studs and completely redone. Had the house been historically important, we would have attempted too salvage the plaster, but it had gotten wet in spots and mold was growing in it. In what is now the master bedroom, one of the past owners had repaired the plasterwork with quickcrete. Unfortunately, the owner prior to us had torn down the old kitchen and stuck on a California sunroom with skylights, vaulted ceilings, and a two level floor amon other things. It looked like someone stuck a bread truck onto the building.
We gutted one room at a time ripping out the lath and plaster (my job). Everything was rewired and the exterior walls insulated (there was none before). We replaced all the windows and refinished the floors. We eventually added onto the house to even out the mess of the addition. The kitchen had been started but needed to be completely redone.

Yes label all your boxes. It helps if only one person is moving them around. We played musical rooms and boxes for years and I pretty much knew where everything was until my husband shifted things while I was out of town. After that, we couldn’t find anything.

We have done a lot of work outside to, repairing porches, landscaping and doing the driveway. Not to mention the rood and painting the house. It is constant and a definite money-pit. The view is lovely and we do love the house.

If your marriage survives a remodeling, there isn’t much else that will test it more. We started 20 years ago and are almost done. We have done most of the work ourselves and both had jobs, so it has taken a while. After a bit the enthusiasm wanes, so we weren’t working as fast as originally. We are also 20 years older. We have the house we should have had when the kids were young, not as we are looking at retirement. My mistake was getting used to having boxes piled all over the place. We ended up with everything from two houses of relatives that passed away and jist stacked it with our stuff. Now I have a massive sorting problem and a mess on my hands.

If you are using a contractor, make certain they are good and check on what is being done constantly. We found several times they were doing what they wanted, not what we wanted. In addition, even good workers make mistakes or forget things. Be flexible and expect delays. Most of all, keep your sense of humor. It will be done and you will enjoy the end results.

Best of luck with your renovations. I hope they don’t take too long.