Fun History of Ballooning and winner of A PERILOUS JOURNEY!

Before I announce the winner of A Perilous Journey by Gail Eastwood, I’d like to share some fun stuff I’ve learned about the history of ballooning while working on my next story, which features a Waterloo veteran turned aeronaut. 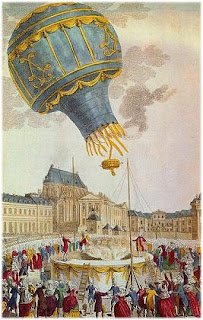 Fun Fact #1
The first creatures to fly in a balloon were a cockerel, a duck and a sheep. They ascended in a Montgolfiere (hot air balloon, named after the brothers who invented it) in 1783, with an audience that included Louis XIV and Marie Antoinette. I have heard that the sheep was taken to live on Marie Antoinette’s farm, but I haven’t been able to verify that story.

Hot air balloons were kept aloft by burning straw, old shoes and rancid meat, which must have had a delightful smell. Because there were no fuels at the time that could burn for long flights, hydrogen balloons became more popular for a time. 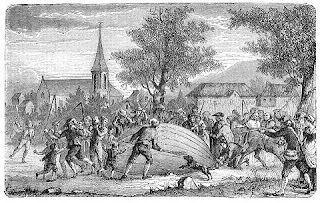 Fun Fact #2
The first unmanned hydrogen balloon, created by the scientist Jacques Charles, took off in 1783, after the first hot air balloon flights. On landing it was said to have been destroyed by peasants with pitchforks who were frightened by the strange creature that hissed and spewed noxious gas. Pure hydrogen is odorless, but the process of creating it involved pouring “vitriolic” (sulfuric) acid over iron shavings. When I consulted a chemist, she told me that the process would  have been imperfect. She concurred with my guess that the result may have smelled like rotten eggs. 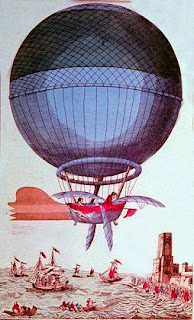 Fun Fact #3
The first aeronauts to cross the English channel were a Frenchman, Blanchard, and an American, Dr. Jeffries. They departed from England on the 7th of January, 1795. They found themselves losing altitude over the water, possibly because the balloon was overloaded or because the cold had cooled the hydrogen, or a combination of the two. To avoid landing in the Channel, they had to ditch all non-essential items. This included most of their clothing.

Fun Fact #4
Blanchard’s and Jeffries’ problems were not over with crossing the Channel. They began to descend again over dense woods south of Calais. As landing in trees is not advisable, they once again had to lighten the load. Since they had ditched just about everything, they decided to pee their way out of danger!

I hope this was interesting. Which (if any) of these facts do you think I’m using in my own balloonist story? 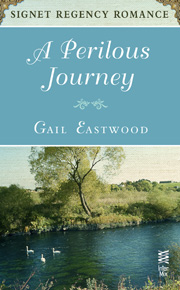 And now for the winner of Gail Eastwood’s giveaway…

Please email me at elena @ elenagreene.com (no spaces) to let me know whether you prefer Nook or Kindle, and which email address you’d like Gail to use in setting up your order.

Congratulations, Ruth! I’m looking forward to sending you your free copy of A PERILOUS JOURNEY, and hope you’ll enjoy it!

I can’t wait to read your balloonist’s story, Elena!

I’m with Jane! I cannot wait to read this story! And the vision of these two gentlemen ‘peeing their way out of danger’ gave me my chuckle for the day. Woe to the innocent bystanders below!

Interesting! Looking forward to it 🙂

I visited the Montgolfier museum in Annonay in France. It was small and my French was imperfect, but it was still a really interesting place.

And Louis XVI (not XIV, who was long since dead by then…)

I think you will use the shedding of excess weight bits in your story. Depending on who is in the balloon, it could get interesting.