Story of a Violin

Well, it’s been quite a week with the great kitchen remodel and the emergency appendectomy Kelly performed, one of my many and valid reasons for going MIA last week. Thanks, Kelly, great job! How I laughed when you asked if you should wash your hands first.

Another thing that did happen last week was that my parents’ musical instruments, a cello (detail here), a couple of violins and some bows were auctioned off. It was sad because we have no string players in the family who could have inherited them, and these instruments were much loved by them. One of my earliest memories is of going to sleep listening to my dad play.

But it was also fascinating because my dad’s violin turned out to be the star of the show. And I didn’t even have to email in bids to keep the bidding going. Even though the auctioneer believed it to be a fake and thus predicted a low sell price, two bidders got into a bidding war over the violin, described as

My dad believed it to be a late nineteenth century French instrument. If it had been a fake, chances are it would have been German. But if it was really what it said it was, then the bidding war was justified. Thomas Perry (1744-1818) was in fact one of the great British violin makers of the late Georgian period who made 3,000 or 4,000 instruments (or 4,906; estimates vary) characterized by a typical rich, warm and focussed sound (grantviolins.com.au). But it’s mysterious. After Perry’s death, WM Wilkinson, his son in law, carried on the business capitalizing on Perry’s name and reputation.

Much has been made of the fact that although Perry’s firm apparently continued to trade as ‘Perry and Wilkinson’ after 1818, Perry and Wilkinson were probably never in partnership, though William Wilkinson married Perry’s daughter. The general view is that standards declined after 1818: ‘a lamentable falling-off in workmanship, modelling and tone’ (Henley). A fairer picture is perhaps that quality became much more variable. Some good work was produced from this workshop but owing to labelling problems it is not always clear what was sold after 1818 but made under Perry’s direction beforehand. From: “The Violin Family and its Makers in the British Isles” by Brian W. Harvey, Clarendon Press, Oxford, 1995; pp183-185. Quoted at fiddleforum.com

But if you were going to fake an instrument wouldn’t it make more sense to attribute it to the period of Perry’s lifetime? 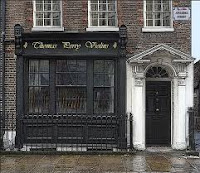 Perry was probably of French Huguenot descent, hence the French connection, related to a Parisian instrument maker called Claude Pierray. He worked in Dublin in Temple Bar, moving to this location on Anglesea Street in 1787. Maybe my father’s family had owned the violin all along, since they came from Dublin, but more likely his father, an inveterate auction goer himself, had picked it up for a song. He probably would have approved of last week’s sale.

I’ve never attended a live auction. How about you? Do you own any family treasures?

My immediate family does not own any treasures, but in March my husband’s aunt’s collection of south Asian art was auctioned at Christies in New York. We went to the pre-auction opening and had a great time. Many of the items were stunningly beautiful, and it was one of the few times in my life I envied the 1% because I would have loved to have bought some of the paintings.

Janet, cool story about the violin and I hope it went to someone who will enjoy it! My daughters play decent student-quality instruments of course, but I know what their teacher’s Victorian era Italian violin was appraised for. I am not surprised at the huge range, though. Even though I’m no expert I can hear the differences between violins. They all have their unique voices.