First of all, to start off my week I got a brand new cover!  This book is coming out in October, a sort of sequel to The Winter Queen set at the court of Mary Queen of Scots (I loved doing the research for this one!).  She has a lot of hair, but just like with my last Harlequin cover I wanna steal her dress… 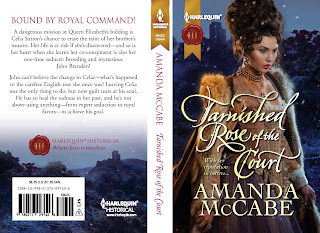 And when I was searching around for something  for today’s blog, I found out that June 26 marks the anniversary of the opening of the V&A museum in its current location!  The Victorian Albert is the world’s largest museum of decorative arts and design, with 4.5 million objects over 145 galleries covering 12.5 acres.  Their collections cover design objects from all over world and in every medium imaginable. 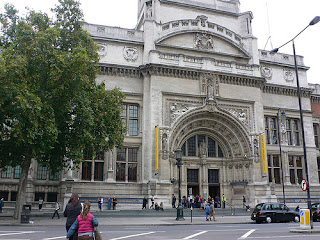 The origins of the museum were in the Great Exhibition of 1851, objects from which formed the nucleus of the first collection.  (Prince Albert was always very keen to promote English arts and design).  It was called the Museum of Manufactures and opened in May 1852 at Marlborough House.  The cornerstone of the current Aston Webb-designed building was laid in May 1899, the last official public appearance of Queen Victoria.  It was officially opened to the public by Edward VII and Queen Alexandra on June 26, 1909 and has undergone numerous extensions since then (including right now).

Just a few of their objects are the Great Bed of Ware (mentioned in Shakespeare plays, see pic below); Henry VIII’s writing desk; the complete Music Room from Norfolk House, 1756; a costume collection of 14,000 objects from 1600 to the present; jewels such as Marie Antoinette’s bracelets and the Beauharnais emerald necklace, given by Napoleon to his stepdaughter; the 13th century Sicilian Tristan quilt; and so, so, so much more.  Plus great shops. 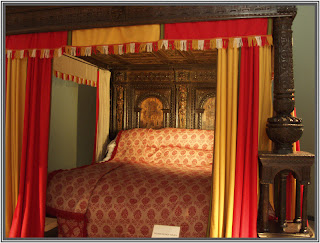 Recently the Oklahoma City Museum of Art hosted a great traveling exhibit of objects from the V&A, including clothes, George III’s walking stick, silver and porcelain, furniture, and a writing table belonging to Marie Antoinette.  It was a small but beautifully selected exhibit, and I visited it several times!  (One of my favorite things they had was this portrait of Madame de Pompadour): 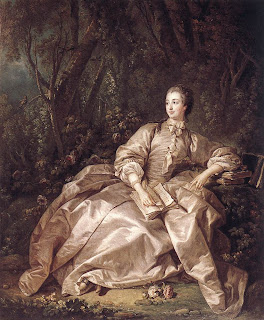 To see explore the museum a bit yourself, visit them here!

Have you been to the V&A?  What was your favorite thing there?  And what do you think of the cover??

I’m lucky in that my husband has worked on a project with the London School of Economics for the past few years so I’ve been able to go with him on his trips to the UK. These trips are far more affordable when at least one of the airfares and some of the hotel expenses are paid for by someone else. The project is now drawing to a close and we leave on our last trip on Saturday; I’m already sad that I won’t have an annual visit to London on my calendar any more.

Whenever I go I visit the V&A, as it is one of my favorite museums in the world. For all the times I’ve visited, there are still galleries I’ve never seen and I discover something new each time. I always, always visit the costume gallery to look at the beautiful (and not so beautiful) clothes. It’s a great help when visualizing the hero and heroine in their Regency or Georgian finery to see actual items of clothing from the era.

I haven’t been there, yet, but I’m thinking I’d want to give myself time for several visits.

The cover is very striking.

The clothing exhibits were always amazing to me. I used to live in London and when I had time to myself would just go there and gawp at the cases. Who knew textiles and stitches could survive for so many centuries?

Susan, I would be sad to lose annual London trips too 🙁 I feel like i haven’t been in so long…

Amanda, I remember when you and I visited the V&A on the last day of our 2003 England trip. We were so tired we sorta walked through in a daze and all I really remember is being in the giftshop.

I have never been to the V&A and I truly want to go! It has been on my “bucket” list for ages! I would probably need a week to see it all the way I want to!

And that cover is GORGEOUS, Amanda!