Friday night the Washington, DC, area experienced a freaky thunderstorm with bursts of high winds of 80 miles per hour. During the storm, we were unscathed and didn’t think too much about it, but the next morning we discovered that right near us there was some incredible damage. The wind apparently shot through the neighborhood like a locomotive. In fact, our neighbors said it sounded like a locomotive. Two houses  away the wind toppled their huge oak tree. 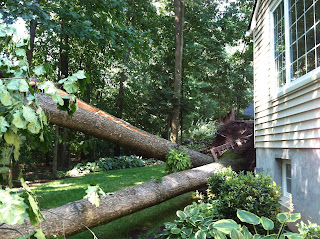 On the road that intersects with our street, another tree fell, directly across the street. A young man driving in the pitch black night ran into the tree and this is the result. Luckily he was not hurt. 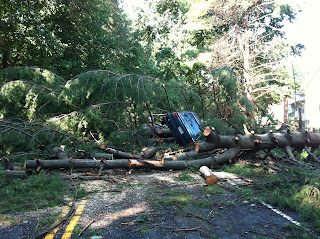 For my blog today, I thought I’d look for a description of storms in Regency England. This is from the Annual Register for the year 1816.

A tremendous storm of and lightning with heavy rain was experienced in Lancashire and the adjoining counties. The electric fluid struck a public house near Tockholes which it greatly damaged and killed the landlord. About three o’clock in the afternoon at Longpark after a considerable deal of thunder and lightning, a dense whitish cloud was observable apparently about Barrock which advanced with great rapidity and, on its nearer approach, presented the appearance of the waves of the sea tumultuously rolling over each other. This phenomenon was doubtless occasioned by the hail composing the body of the cloud and whirled along by the hurricane which enveloped it. On reaching Longpark a scene of desolation commenced within ten minutes a most tremendous volley of pieces of ice, some of them an inch in diameter, shattered the windows of the houses, tore up the turf, beat down the vegetable products of the earth and did great and extensive damage. Mr James had the whole of his crop of barley, oats, etc., completely cut down as with a scythe. More than half the produce of the inhabitants of the village is lost. The like destruction occurred in the neighborhood and a few houses were unroofed. At Whaldub about 14 acres of barley were entirely destroyed besides other injuries. At Parkbroorn Walby, the garden vegetables were nearly all destroyed. The same afternoon the hurricane visited Longtown and the neighborhood at Netherhy upwards of 700 panes of glass were broken in the hot houses of sir James Graham and sixty squares in the house were driven in with great violence by the hail stones. A particularly large tree at Kirkandrews-upon-Esk and more in the neighbourhood were com pletely torn up by the roots.

Our storm did not have much “electric fluid” or hail, or even rain. It was at night, so we couldn’t see what the clouds looked like. Our storm didn’t even last very long. It was the wind that did the damage.

I’ll leave you today with this much tamer image of a rainstorm. 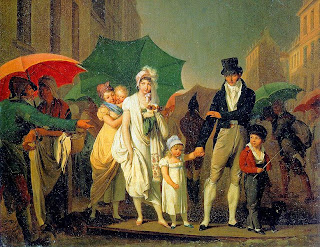 Stay dry and safe!
Thanks to everyone who played our Harlequin Historical Authors Beach Bag Giveaway. The Grand Prize Winner will be announced at any second!

Seeing trees down like that always makes me sad. It also scares me a bit. That is some serious storm damage. Stay safe!

Thanks for sharing that bit from 1816. The year without summer.

It is a reminder that Mother Nature is really in charge, whether it be through the wind here in the DC area or the much more destructive fires in Colorado.

So glad you are safe and didn’t have too much damage at your house. Those downed trees look scary! And the young man who hit that tree is very lucky!

And yes, Mother Nature is always in charge. Sometimes she really throws her weight around!

I’m glad you are OK, Diane.