Amanda is taking Tuesday off for a little pre-4th of July picnic prep, but Michelle Willingham is filling in with a post about Scotland and her exciting new release, Tempted By The Highland Warrior!!  Comment for a chance to win a copy.  See you next week…

Visiting Scotland for Research
When I was contracted to write a Highlander series, I knew I had to visit Scotland. In my mind, I envisioned tartan-clad heroes riding across the hills, with their claymores drawn. I pictured William Wallace, Robert the Bruce, and of course, the eternal Highlander as we drove on those narrow, winding roads. 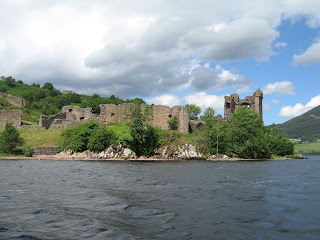 It’s a stunning land, full of wild beauty. But during our days there, it rained every single day. At the time, I was a little frustrated. I had wanted to hike through the mountains of Glencoe, seeing the mountains in all their glory. Instead, I saw fog and clouds, blocking our view. Our windshield wipers got a great workout, and every time we stopped the car to take a picture, both of us were fighting off the rain.

But when the rain stopped and the mists rose, the landscape left behind was breathtaking. It was a haunting place where I could feel the stories. We visited the infamous Loch Ness (and yes, I did look for the Loch Ness Monster like everyone else), but what drew my eye was Urquhart Castle. Although there were fortifications there as early as 460 AD, the first castle was likely built in the 13th century. It was there during the time of William Wallace and it provided the perfect research location on what a castle might look like during the era I was researching.
As you approach the main gate, there was once a portcullis to counteract the effects of a battering ram. Two guard towers were on either side, and a small deck made of timber allowed the defenders to pour hot oil on the invaders or attack from above.
Inside, although the floors have all rotted away, you can see the upper floor was divided into several rooms, one of which was used as a banquet all to serve honored guests. Music and feasting were part of the tradition of Urquhart Castle, which were held by the Comyn, Durward, Gordon, and Grant families. Boats could travel along Loch Ness, bringing news to the castle inhabitants or bringing items to trade. 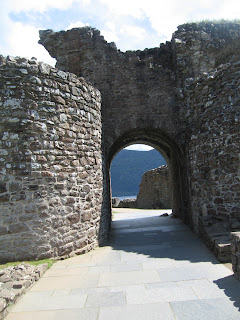 The castle was captured by Edward I of England in 1296 and was transferred through different families until it was almost destroyed in 1609 by Williamite forces who were holding the castle against the Jacobites. By destroying it themselves, they ensured that it wouldn’t fall into enemy hands (a strange move, but one that worked). It remained a ruin and is now owned by the state.
When I was writing my MacKinloch Clan series, Urquhart Castle provided a wonderful inspiration for the settings of the different books. My newest release, Tempted by the Highland Warrior features a mute Highlander who grew up as a prisoner-of-war. He’s in love with Lady Marguerite de Montpierre, the daughter of the Duc D’Avignois. It’s a Romeo and Juliet story of two lovers who are worlds apart and try desperately to be together.
Today I’m giving away a signed copy of the book (or Kindle if you prefer) to one lucky commenter. Just tell me— what’s the weather like in your part of the world?
Learn more about Michelle Willingham’s books by visiting her website at: http://www.michellewillingham.comor interact with her on Facebook (http://www.facebook.com/michellewillinghamfans) or Twitter (http://www.twitter.com/michellewilling) 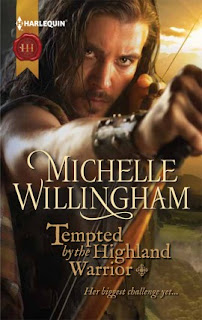 Thanks for sharing some of those inspiring photos, Michelle! Absolutely gorgeous 🙂 Can’t wait to read Tempted…

It’s going to be 93 today and sunny. I wouldn’t mind it, except it’s humid heat. Sigh. Enjoy your day!

9Your photos are wonderful. Wold lover to win one of your books. It is a hot 96 degrees in the south today.

Today it is in low-80s. Too hot for me and I’ve had my air conditioning running for days now.

I love the Scottish settings (men in kilts!) and would love to win a copy of your book.

Are we obsessed by weather or what? My post yesterday was all weather…

Welcome, Michelle!!! Tempted by The Highland Warrior has the BEST cover ever!!! But I’m in awe of the challenge you gave yourself to write a mute hero (and very envious of your trip to Scotland!)

On the west coast of BC or “wet coast”, it is raining and cool. So I would love a good romance to read while curled up by the fireplace 😉

I’m jealous of you, Belinda! 🙂 Would love some cooler weather.

Diane–I think so! The weather in VA has been so strange lately.

Hi, well I live approx 200 miles away from Scotland so the weather is much the same as there.
At the moment it is rainy but has been a lovely day.
Typical Uk weather as you,no doubt found out on your visit.

Oops, didn’t know if I had to leave my email addy.

First of all, I must say that the cover stops me in my tracks! Love it!

Here in the upstate of SC it’s hot – 101 F. But will be dipping to the high to mid 90’s. Much of the US has been in a crazy heat wave. Unfortunately, it is our normal to have 90 degree weather most of the summer. I just wish we would get more rain.

Well, the weather in Seattle is a lot like Scotland–rainy and cloudy most of the time, but when it does clear up, it’s beautiful! Today was mostly cloudy and about 65. I bet those in the midwest and east would gladly trade with me, and I would accept!

Your book sounds like a great read and didn’t it just win an award somewhere? Thought I saw your name listed…

Michelle, I think I’ve told you before that is one AMAZING cover!

The weather here in LA (Lower Alabama) has been HORRID! Temperatures in the 100’s with no relief in sight. However, tonight we’ve had a few rumbles of thunder and I hope it isn’t just a tease, but the portents of some much needed rain!

I visited Scotland in 1981 and found it to be an incredibly beautiful land. So much of it felt as if I was stepping back in time!

Pretty crisp here in Perth, Australia…about as cold as it gets in the winter here which isn’t anything like the Canadian winters I grew up with.

Anyways, I’m truly looking forward to reading Tempted. One of these days, when the kids are grown hubby and I will make our way to the UK to see some of the castles, ruins and beautiful sights.

The weather is terrible – in the high 90’s all week. many people in the area are still without power after last Friday’s storms.

It was hot and sunny earlier today, but now there’s thunder rumbling and a storm on the way. Still plenty warm here in Orlando though, around 81 degrees.

Pouring with rain at the moment, like most of the UK, including Scotland, I believe! L. Oliver

It’s extremely hot here in Kansas City. We have been breaking records from the 1930’s for several days or a week now. It reached 106 degrees here today and 107 yesterday. It is too early in the year for these high temps.

Karen–Claimed by the Highland Warrior is up for a Bookseller’s Best Award. It also won an award of merit with Virginia Romance Writers. 🙂 But so far as I know, it’s too early to enter Tempted in any contests.

Sounds like many of you are experiencing the horribly hot temperatures!