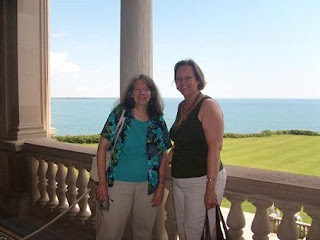 I’ve just returned from a busy but fun vacation that ended with two lovely days with my dear friend and fellow Regency author Gail Eastwood. We spend the first of those days touring just a few of the famous homes in or near Newport, Rhode Island.
We began with the Breakers, the home of Cornelius Vanderbilt II, commissioned in 1893 and the most imposing of all the Newport mansions. Here Gail and I are posing on the terrace overlooking the water. And here’s a picture of the Great Hall by CC-BY-SA-3.0/Matt H. Wade at Wikipedia. 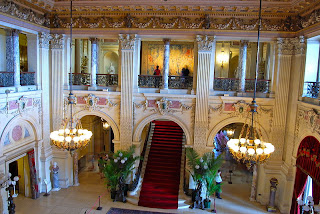 I found the tour very interesting, but I have to admit the style of the Breakers did not appeal to me. Although I like ornamentation, I prefer designs that allow some resting places for the eye. At the Breakers the goal seems to have been to give every available surface some sort of special treatment.  It just seemed like Too Much. But the Gilded Age was the era that coined the phrase “conspicuous consumption”.
Comparing the Breakers with homes I’d toured in England, my impression is that the goal of houses like the Breakers was more the display of wealth than taste. In my favorite English homes, I like to think the designs were inspired not only by a desire to demonstrate good taste but a genuine love of beauty as well. 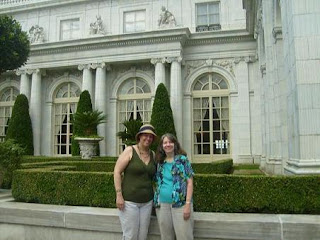 Gail told me I’d probably find many of the other Newport mansions gaudy, so she suggested we visit Rosecliffnext. According to the online guide, “Commissioned by Nevada silver heiress Theresa Fair Oelrichs in 1899, architect Stanford White modeled Rosecliff after the Grand Trianon, the garden retreat of French kings at Versailles.” We agreed that the more restrained style was more elegant but also very romantic.
Our modern sensibilities still don’t easily embrace the idea of a family living in a home vastly greater than their needs, with an army of servants to keep it up.  It does make more sense if one considers the scope of their entertaining. In fiction, the house party stories like Gail’s recent reissue, An Unlikely Hero, need this sort of grand setting.
I don’t have problems with fictional heroes and heroines living this lifestyle as long as they treated those who lived and worked on the estate kindly. To have them question this arrangement would feel anachronistic without the right setup, perhaps an unusual upbringing that would have been considered revolutionary (probably not in a good way). 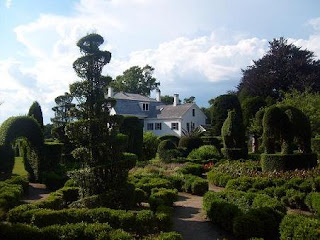 Nevertheless, I’m glad that famous houses in England and elsewhere are now opened up as museums. I’m glad they’re also used as public spaces for concerts, weddings and other functions.  It seems right to me that those without the means to live in such over-the-top settings can still enjoy them now and then.
Our final stop was Green Animals. The house is relatively modest, decorated in Victorian style but cozy rather than overdone. The real star of this property is the garden populated with topiary animals. We were lucky to make it there for the last hour and tour the garden, bathed in late afternoon sunshine, though we heard rumbles of thunder from the north. 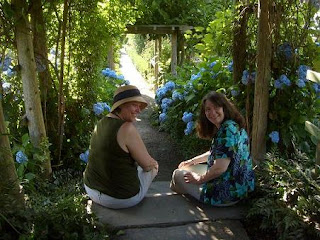 I did love the last house you visited! I LOVE topiary gardens!

What a lovely trip!!!!! There is nothing like touring historical places with like-minded friends.

My one and only time in Rhode Island was for a family vacation in a rented house not too far from Newport.

The beach was rocky and unpleasant and the water was FREEZING. The house had a great view of a sewage plant. One of the kids wound up in the ER. I got sick and the highlight was going to the movies to see Groundhog Day.

But it did spawn one of the funniest quotes from my son, then about 9. Our friend asked, “What I want to know is why it takes (my daughter) twice as long to take a shower as it does the three of you (my son and friend’s two sons).”

Without missing a beat my son said, “Maybe she uses soap.”

OMG !! I laughed out loud at your clever son! “Maybe she uses soap.” indeed !!

Elena, what a great-looking vacation. I would love to tour those houses…

It would be so much fun to do these tours with all of you. Or have a masquerade ball at Rosecliff, maybe hosted by Amanda as Marie Antoinette?

Diane, so sorry you didn’t enjoy that vacation but I’m laughing at that story!

I went and looked up the list of houses via the link. Sure, most were gaudy, but I LOVED the Gothic Revival house, Kingscote.

A long time ago I read a time-travel romance set in Newport called When There is Hope. It’s an early title by Jane Goodger who I think writes under a pen name now. The book has some POV and believability issues, but somehow that didn’t matter and it became a keeper I read again and again.

We only visited 3 places, because personally I would rather take my time and see less, than rush to get it all in. But Gail is urging me to visit again, so Kingscote will be high on the list.

Rhode Island has lots of historical sites to offer. It was so much fun to share a few with Elena! Diane, I had to laugh at your description of the vacation gone wrong –just sorry it was in RI!!! I promise you we have some beautiful sandy beaches, although the water does tend to be cold! Elena and family will back me up, I think –that is where we spent day #2 of their time here. 🙂

Gail, one of the frustrating things about that Rhode Island vacation was knowing that there was opulence and beauty just a short ways away in Newport. There was not one person on the trip who would have wanted to tour those mansions with me.

I don’t hold it against RI, believe me!!