Happy Tuesday, everyone!  I hope you all had a great holiday last week.  I ate too much junk food and drank too many weirdly concocted cocktails, but I think I have recovered now…

At the moment I am 1) working on a new Regency-set romance for Harlequin.  It’s been a while since I dipped into the Regency world, and this is a new sort of story for me (a marriage-in-trouble plot) so I am enjoying it! and 2) I am researching and plotting the first in my new Elizabethan-set mystery series for NAL! (I have a new pen name too–Amanda Carmack).  The catalyst for the story is the death of Lady Jane Grey.  Even though my story starts in 1557, on the eve of Elizabeth becoming queen, I’ve had to research Jane’s tragedy as well.  And I found out that today, July 10, in 1553, she began her short-lived reign. 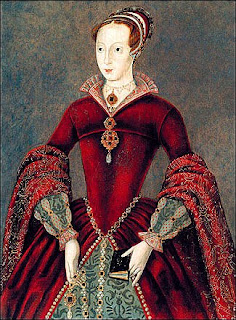 Jane was born in 1536 or ’37, the eldest of 3 daughters of Henry Grey, Duke of Suffolk, and his wife Lady Frances Brandon (the daughter of Henry VIII”s sister Mary, dowager Queen of France, and her husband Henry Brandon).  Jane was very well-educated, speaking Latin, Greek, and Hebrew, as well as modern languages like Italian and French.  She was a devout and committed Protestant, corresponding with European theologians like Bullinger.  She would prefer to hide away with her books rather than join in her party-loving family’s ways, and often complained about her strict upbringing (like in this letter to Roger Ascham):


“For when I am in the presence either of father or mother, whether I speak, keep silence, sit, stand or go, eat, drink, be merry or sad, be sewing, playing, dancing, or doing anything else, I must do it as it were in such weight, measure and number, even so perfectly as God made the world; or else I am so sharply taunted, so cruelly threatened, yea presently sometimes with pinches, nips and bobs and other ways (which I will not name for the honour I bear them) … that I think myself in hell.”

But her quiet life wouldn’t last.  On May 21, 1553 she was married against her will to Lord Guildford Dudley, son of the Duke of Northumberland (King Edward’s chief advisor).  Her sister Katherine was also married to Lord Herbert, heir to the Earl of Pembroke, and Guildford’s sister Katherine to Henry Hastings, heir to Earl of Huntingdon.  It was a lavish ceremony, and widely perceived to be a consolidation of power since things were about to change.

In the Third Act of Succession, passed by Henry VIII and Parliament in 1544, Henry restored his “illegitimate” daughters Mary and Elizabeth to the succession, after his young son Edward.  But in 1553 Edward knew he was dying.  He was a devout Protestant like Jane, and his ardently Catholic sister Mary was his heir.  He drafted his will to leave the throne to the descendants of his aunt Mary (ie Frances and her daughters), and it was signed by 102 nobles.  Edward intended to have this declaration passed when Parliament met again in September, but he died July 6.  His death was kept a secret until Jane was told she was queen on July 9 (legend has it she wept and refused), and was taken to the Tower with her husband and officially proclaimed queen to the bewildered public on July 10.

But her claim was weak from the start.  (Legal experts of the time said a king could not contravene an Act of Parliament without passing a new one.  Plus it was pretty clear Henry’s daughter should have precedence over his great-niece).  Northumberland also made a key miscalculation when he didn’t move fast enough to capture Mary.  After years of living quietly (except for bitter quarrels with her brother over religion), she surprised everyone by escaping and putting up a stiff fight.  She was helped by the fact that the public saw her as the rightful heir, and the tide quickly turned against Queen Jane.  Mary was proclaimed queen on July 19 among much rejoicing, she entered London on August 3, and Northumberland was executed on August 22.

Mary at first was merciful to her cousin, and even released Jane’s father.  It was thought that eventually Jane would be released as well, and left to live a quiet country life with her books.  Until the Wyatt rebellion, which used Jane as a figurehead and which her father foolishly supported.  Jane was executed on February 12, 1554, a deeply sad day which sets in motion the plot of my own book…

Jane became a romantic legend after this, a Protestant martyr and “sweet young thing” (though many of her letters show that she was a pretty normal, though very precocious, sulky adolescent).  For more info on her short, complicated life, I really liked Eric Ives’s Lady Jane Grey: A Tudor Mystery (2009) and Leanda de Lisle’s The Sisters Who Would Be Queen: The Tragedy of Mary, Katherine, and Lady Jane Grey (2008).  Jane’s sisters had equally sad lives, trapped by their situations of birth into unhappiness.

Are you interested in Jane’s sad life?  Who are some of your heroines this summer??

I have always been fascinated by Lady Jane Grey’s story. What must it have been like to have been snatched from your world of books and study and suddenly placed on a throne and told you are queen. And I have always felt her execution a huge injustice. Can’t wait to read your new series !!

I’ve made a note of those books, but I’m more excited about your new series. You are so versatile, Amanda!