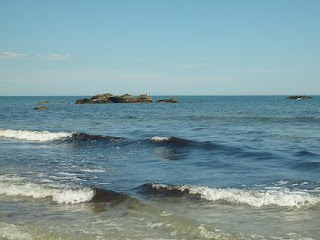 The day after our tour of some Newport mansions, friend and author Gail Eastwood and I enjoyed a day at this lovely Rhode Island beach.

At 65 degrees, the water was brisk but refreshing and we had a nice swim. If this were the Regency, we would still have been able to go in the water. But instead of wearing modern bathing suits and running in (OK, wading in slowly), we would have had to enter using a bathing machine, possibly drawn by a donkey or pony, and we would have worn period-appropriate bathing gowns. 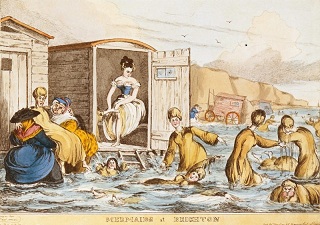 Instead of the sexes mingling freely on the beach, areas would have been dedicated to ladies and to gentlemen. However, some ogling may have occurred, as there are accounts of gentlemen employing telescopes to view ladies entering or exiting the water. Not sure why–perhaps the bathing dresses got a bit clingy when waterlogged?

After our swim, Gail and I went for a walk on the beach, happily barefoot. A fellow Regency writer once pondered the question as to whether a lady might do that during the Regency. I don’t have a definitive answer. I would guess not on a busy beach, since it would entail untying a garter and removing stockings in public. On the other hand, if it were a very private beach, perhaps on the hero’s coastal estate, and hero/heroine were alone… I will leave what clothing might be removed to your individual imaginations. 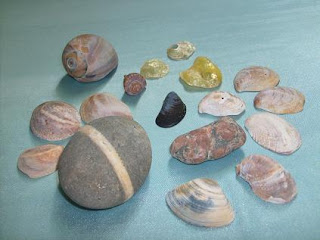 Some Regency ladies would have collected seashells and pretty stones, as we did. Here’s my trove, including what Gail told me is a “lucky stone”, since it has a contrasting band going all the way around it. Perhaps it bodes well for my mess-in-progress?

I’ve never done anything with my finds but display them in glass jars. But as I started googling around to see what Regency ladies might have done with them, I became intrigued. Although shellcraft become even more popular in the Victorian era, the idea of creating decorative objects or even decorating walls and furniture with shells began earlier, definitely by the Georgian period. 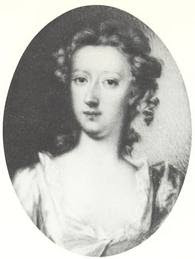 Mary Delany (1700-1788) was an English Bluestocking and artist. Her first marriage was unhappy; she wrote that “Why must women be driven to the necessity of marrying? a state that should always be a matter of choice! and if a young woman has not fortune sufficient to maintain her in the situation she has been bred to, what can she do, but marry?” Her second marriage was happier and she spent much of her time gardening, painting and decorating interiors with shells. Later in life she began to make paper flower “mosaicks” some of which are at the British Museum. I would have liked to have known Mary Delany. Unfortunately, it was hard to find images of her shellcraft in time for this blog.

Jane and Mary Parminter, two spinster cousins, returned from their Grand Tour late in the 18th century. They had a 16-sided house,  A La Ronde, built for them and decorated it with many of the treasures from their travels.  Here is an image of the shell gallery they created. 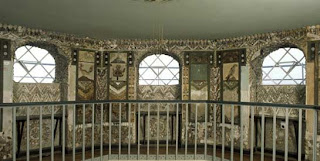 Regency folk could have indulged in various forms of shell craft, from decoration of glove boxes and trinket boxes to the creation of romantic shell grottoes.

I used to associate shell art with the silly sorts of things you get at tourist shops. But as I googled around this week, I saw many artistic and beautiful creations. I am not personally that excited about some of the extravagant Victorian creations, things like vases of shell flowers under glass domes. Although I appreciate the craftsmanship and time involved, my personal preference is for art that shows off the natural beauty of the shells rather than making them look like something else. 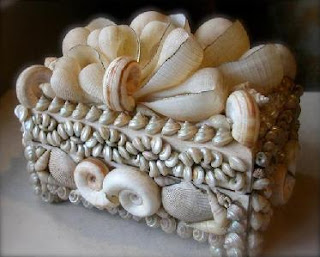 I found some lovely examples of shell art at Fine Shell Art Blog.  Through that blog, I discovered the work of shell artist Peggy Green.  Here’s just one example of her exquisite work.

Through the Fine Shell Art blog, I also discovered a gallery of shell art so tacky that some of it is downright scary. You can check it out here but don’t say I didn’t warn you!

In any case, do check out the lovely items on Peggy Green’s site, www.shellartist.com.

So what’s your favorite thing to do at the beach? Are you into shell collecting? What do you think of shell art?

I’ve always been intrigued by the shell cottage the Duchess of Leinster and her daughters created at Carton House in Ireland. From what I understand, one of the sons was in the navy and would send/bring home shells for them from his travels.

I do collect shells, but I display them in oddly shaped glass containers in my hall bathroom as it is done in a beach motif. I have some lovely larger shells as well,sent to me by former students from their travels.

I am fascinated by the shell work done in Georgian, Regency and Victorian England. I even have a character in my current WIP who does shell work. In my research I discovered there were cabinets made with dozens of drawers to keep shells in for the purpose of shell work.

That is a very cool cottage, Isobel! I loved some of the decorating suggestions in that link, too.

That’s pretty much what I’ve done with my shells, Louisa. But now that I’ve seen what’s possible I want to try shellcraft project. Maybe sometime after I’ve finished the various crochet and jewelry making projects I’ve already got going!

Few do it better in the art of shell work than Peggy Green. She continues to evolve and yet they remain timeless and reminder of the past.

Now I want to go to the beach!

Elena, I obviously need to study more about the pastimes of Regency ladies. I didn’t even think of shell art.

Peggy Green’s work is lovely and though I liked the whimsical card-playing shells from the other site, it does show the difference between craft and art.

Just had to stop back by to say Peggy Green’s work is amazing! Those crosses are exquisite and those boxed frame mirrors? Amazing!

Oh, I am sooo envious! I wanna go to the beach too 🙂

A local decorating/antique shop (which is usually too expensive for me to buy at, but which I love to browse) recently had a collection of shell art. I think it was more Victorian, but looked very similar to these examples…

I love walking barefoot in the sand, with the water flowing over my feet, not even to my ankles, just a bit.

I’ve seen stunning shell frames, and I have a vase full of shells. I love shell art.

My personal preference is to admire the individual shells for the work o f art they are. Some of the items were nicely done, but the majority were a waste of effort. Of course, that is just my opinion, and I know there are many people who enjoy that sort of thing.