Passion’s Song: To The Tune of Shameless Self-Promotion 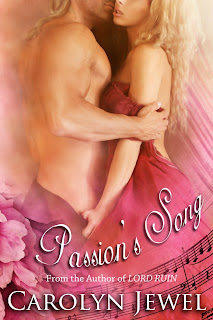 At last, my reversion for the first novel I wrote, Passion’s Song, came through. And now you can read it. (I’m working on the POD version). Cover art by the wonderful Patricia Schmitt.

Passion’s Song was originally published in 1987. Yes. That’s right. 19 and 87. Before the internet was anything but a really neat tool for academics and DARPA. Before the World Wide Web. “Portable” computers were the size of 3 breadboxes end to end.

I was shaking after I heard the message on my answering machine tape offering to buy my book. Shaking. I had to go walk around the block just to calm down enough to think straight.

I wrote it on an Apple IIc using a nifty program called Word Juggler. I once wrote to the developer of Word Juggler about a problem I felt was a bug and he wrote me a very long personal reply explaining how hard he worked on his program. Then he called me an idiot.

It took 9 hours to print out the manuscript. NINE hours. I had to wait for a weekend to print it out. Editorial comments were actually in red pencil and queries were on special pink tearaway flags pasted to the MS page. I had to MAIL the MS and there was no overnight delivery option.

It reflects the writer I was then. I look at it now, and well. There is is. The book I wrote in 1987. Bought two weeks after my one query made it to NY. Edited to DEATH and then given back to me with instructions to “put it back the way it was.” So, yeah.

American orphan Isobel Rowland learns she is the illegitimate daughter of an English aristocrat only when her father at last locates her and brings her to England. Her father intends to find her a husband, and if she can catch the interest of Alexander, Marquess of Hartforde, all the better. She hopes to continue her musical studies but finds it impossible unless she masquerades as a young gentleman. Alexander’s interest in remarriage is close to nil, though he finds Miss Rowland intriguing. He is more than happy to act as patron to a promising American musician, Ian Rowland. When Alexander discovers that Ian and Isobel are the same person, their lives collide and before long, they have no choice but to marry and attempt to make a life together.

I couldn’t really read it because then I’d want to completely re-write it. Because I am not the same writer. I’ve learned a lot about writing and the business and, of course, changed as a person and a writer.

Passion’s Song is my words in 1987, and I totally own them. It’s a fun story, with an evil step-brother, a (late) wife who wasn’t very nice, a perky younger sister, and a jaded aristocrat hero with blond hair and a queue. There’s puppies, too.

All I’ve done is had it proofread and corrected some typos that were in the original. Like, somehow the copyeditor (and me!) missed that Brooks’s is s’s. I had to scan it from paper, so there were a lot of OCR errors to correct. My proofreader did an amazing, amazing job of catching OCR errors and original typos. Of course, I did my own proofing for errors with the digital display. I’ve already re-uploaded to correct a few more errors I made.

Where you can get it now:

Hopefully SW will get the book on sale at places like Sony, Diesel Books and other wonderful sellers of eBooks.

I am so impressed, Carolyn. I did not realize your first book was 1987. May it have a great new digital life!!

Congratulations on this re-release! It sounds like a fun book.