I just read Quiet: The Power of Introverts in a World that Can’t Stop Talking by Susan Cain. I found a lot of it spoke to me in terms of my own experience as an introvert. With the caveat that people are unique individuals and there are many other personality traits that affect behavior, also recognizing that introversion/extroversion is a spectrum (with some in the middle who are called “ambiverts”), Cain describes the strengths and weaknesses of introverts and extroverts and suggests ways they can learn from one another and work together more effectively.

Cain believes our culture currently undervalues introverts, with parents and teachers often pushing quieter children to be more outgoing, with open office spaces, an emphasis on group thinking, etc…  According to Cain, introverts are not necessarily shy (although some are). Nor are they antisocial. The real difference between introverts and extroverts is the level of stimulation each prefers. None of these are absolutes, but… Extroverts are more likely to enjoy large parties and are more comfortable meeting strangers; introverts prefer smaller, more intimate gatherings of good friends. Extroverts are better at multitasking while introverts excel at tasks requiring focused, solitary effort (like writing books).  Extroverts are more likely to be risk-takers while introverts are more likely to be the important voice of caution.
Cain says we need both and that each can learn from the other. Introverts can benefit from pushing themselves, especially in pursuit of a goal or cause important to them. Extroverts can benefit from learning to slow down and listen more.  But it is even more important that we learn to understand ourselves and work to our strengths, while appreciating that others may have different gifts.
If you’re not sure where you are on the introvert/extrovert spectrum, there’s a quiz you can take at http://www.thepowerofintroverts.com/quiet-quiz-are-you-an-introvert/.
I came out strongly introvert, which was no surprise as much of this book resonates with me. I truly enjoy spending hours alone working on my stories.  Although I also enjoy stimulating situations like writers’ conferences and I’ve even managed to give the occasional workshop, these do take me out of my comfort zone. As Cain recommends, I take time to prepare and I also try to work in some quiet time to recharge between activities. I will get up half an hour early to swim if there is a hotel pool; otherwise I walk.
Cain writes that Western society tends to favor the extrovert, while in many Eastern cultures introversion is seen as a sign of wisdom, neither necessarily being right. Cain also writes that until fairly recently in history, character was considered more important than personality. This means that during the Regency, introversion might not have had the stigma it sometimes does now. I think there still must have been some tension between the personality types, though.

Cain talks about couples who come from different ends of the spectrum, saying they have challenges to overcome but can also find that their differences can balance each other in a good way. 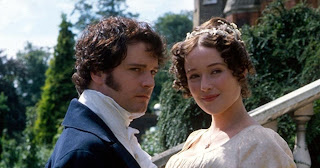 I think Jane Austen had an intuitive grasp of this. Although there are many ways to look at Pride and Prejudice, the introvert/extrovert dynamic can be seen as contributing to the tension between Elizabeth and Darcy. Consider this conversation:

“Perhaps,” said Darcy, “I should have judged better had I sought an introduction; but I am ill qualified to recommend myself to strangers.”
“Shall we ask your cousin the reason of this?” said Elizabeth, still addressing Colonel Fitzwilliam.
“Shall we ask him why a man of sense and education, and who has lived in the world, is ill qualified to recommend himself to strangers?”
“I can answer your question,” said Fitzwilliam, “without applying to him. It is because he will not give himself the trouble.”
“I certainly have not the talent which some people possess,” said Darcy, “of conversing easily with those I have never seen before. I cannot catch their tone of conversation, or appear interested in their concerns, as I often see done.”
“My fingers,” said Elizabeth, “do not move over this instrument in the masterly manner which I see so many women’s do. They have not the same force or rapidity, and do not produce the same expression. But then I have always supposed it to be my own fault–because I would not take the trouble of practising. It is not that I do not believe my fingers as capable as any other woman’s of superior execution.”
Darcy smiled and said, “You are perfectly right. You have employed your time much better. No one admitted to the privilege of hearing you can think anything wanting. We neither of us perform to strangers.”

Elizabeth and the Colonel clearly don’t understand Darcy, but she does have a point in that he could try harder. And then consider this bit, as Elizabeth learns to appreciate Darcy.

She began now to comprehend that he was exactly the man who, in disposition and talents, would most suit her. His understanding and temper, though unlike her own, would have answered all her wishes. It was an union that must have been to the advantage of both; by her ease and liveliness, his mind might have been softened, his manners improved; and from his judgment, information, and knowledge of the world, she must have received benefit of greater importance.

If you’d like to know more about Quiet, check out Susan Cain’s TED Talk at http://www.ted.com/talks/lang/en/susan_cain_the_power_of_introverts.html.

What do you think?  Did you take the quiz and if you don’t mind sharing, where did you fit? Any favorite stories that feature extrovert/introvert couples?
Elena
www.elenagreene.com
www.facebook.com/ElenaGreene
0 0 votes
Article Rating
Subscribe
Login

No surprise to learn I’m an introvert, though not a purist, as I answered false to a few of the questions. At least one I answered no to (do you wait to share your work) is because I’ve learned to share it with my main reader. Favorite stories: Dolley and James Madison! Dolley was definitely and extrovert and James was the quintessential introvert. What a remarkable couple.

I’m a total introvert. Though I don’t always think before I speak…

I find the internet has been great for me to express myself (in writing). In a past era, I probably would have been a recluse with 100 pen pals 😉

I recently read this book myself, and gained a lot of insight from it! While I do enjoy meeting people and hearing their “stories” (it’s a good way to keep inspiration flowing) most of the time I’d just rather be at home with a book 🙂

Judy, I didn’t answer every question as an introvert, but I don’t show my work even to my trusted critique partners until I’m satisfied I’ve done my current best with it (then they push me to the next level).

Phyllis, I know what you mean. I do like expressing myself in writing because I can revise and polish.

Amanda, you are so nice at conferences that I might’ve pegged you as an “ambivert”. But I totally get that need for quiet time, too.

atyI came up as a total introvert which I am sure will shock those who know me. My years as a performer have really helped me to play extrovert when the occasion calls for it. However, long hours rehearsing with just a pianist or on my own were the best times of my life. I prefer my isolated house, my writing, my books and my animals at this point in my life. And, of course, a few really good friends when possible.

I answered about 3 questions false. I share my work with others; I care about wealth and fame :-); and I don’t let calls go thru to voice mail.

I do get recharged by being with small groups of people, not huge groups, though, like conferences. I’ve learned to love talking to new people, but it comes with some effort. It was the romance writing and the desire to be successful at it (wealth? fame?) that drove me to push myself out of my introvert state. Can’t tell you how that has enriched my life.

LOL Jane. I think that’s why we go to writers’ conferences.

Louisa, the author of this book says that for an introvert, putting yourself out there works best if you do it in pursuit of a project or goal that is personally important. Sounds like you did just that.