A Not So Respectable Gentleman? Release Day (Almost) 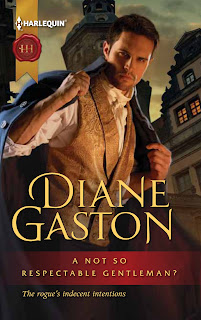 Tomorrow is the Release Day for A Not So Respectable Gentleman?
It should appear in bookstores and can be ordered online. (ebook versions is out Aug 1, and the Mills & Boon version is out Aug 3)

I’m both excited and a little sad that the book is finally here (almost). A Not So Respectable Gentleman? is the last book in the series that began with the anthology, The Diamonds of Welbourne Manor.

In 2007 the adventure began when Harlequin Mills & Boon editor Maddie Rowe invited Deb Marlowe, fellow Risky Amanda McCabe, and me out to dinner during the Romance Writers of America conference in Dallas, Texas. We thought she was just being nice. The Mills & Boon editors always do nice things like that for their authors during the conference. Turns out she offered us a Regency anthology and each a book connected to the anthology.

Deb, Amanda and I were already friends. We’d become especially close on the Regency tour of England in 2003. So this was a fantastic treat. Our only instructions were to set the anthology in the Regency. 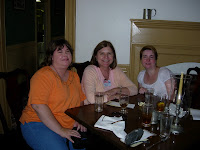 When we later met in Williamsburg, Virginia, to plan the anthology, we decided to create connected stories about a scandalous family created by the love affair between a duke and a lady who left her husband, an earl, to live with him. Their children – his, hers, and theirs – became known as the Fitzmanning Miscellany.

Here’s the back cover blurb:

Since Leo Fitzmanning returned to London, he’s kept his seat at the card table warm, his pockets full of winnings and his mind off a certain raven-haired heiress.
Until whispers at the gaming hell reveal that Miss Mariel Covendale is being forced into marriage with an unscrupulous fortune hunter!
Leo must re-enter the society he detests to help her before returning to his clandestine existence. But he hasn’t counted on Mariel having grown even more achingly beautiful than he remembered. Soon Leo realizes that there’s nothing respectable about his reasons for stopping Mariel’s marriage.

Here’s what the reviews are saying:

a lovely romance with a bit of suspense and the power and strength of a family….Gaston’s talents for evoking the era hold true to form….–Kathe Robin, RTBook Reviews

What made this book such an enjoyable read was the quick pace of the story, with characters that were allowed to be intelligent and practical people, while also being flawed…the romance that Leo and Mariel find again in one another kept my attention from beginning to end, and I closed the book with a smile for their future together.–Sara Anne Elliot, Rakehell

It was great fun revisiting the family we created together. Because this was the last book, I made it a point to bring all the Fitzmanning Miscellany back. They play important roles in Leo’s story. In fact, what Leo must learn in this story is that he can rely on his family when all else fails.

A question for you. If a book is part of a series, do you have to read all the earlier books first? Or do you not mind if you don’t know all the details that came before?

I joke around with my friends and say I’m the queen of jumping in the middle of a series. I do this quite a bit. Not so much anymore since I got my kindle. However, it was kinda fun to read a story and not find out it was in a series. If I liked the book, I would back and find book one read the series through. However, if I didn’t like the book, no problem I didn’t have to read the rest of story. Sometimes I would start a story and go I’m missing something, so I would do some research to see if there was a prior book. Then get the book.it really depends on the book in the series.

I like to read series as they are written. But it’s not always necesary to read them all in order. I’ve read some books that were part of a serie on their own and loved them. They did prompt me to read other stories connected to them 😀

((Diane)), congratulations!! I’m so glad Leo’s story is finally here. I have been dying to read it.

However, in some authors’ hands, even if you jump in the middle, the authors are able to weave in the requisite details so newbies understand the character and those who already know the character are not bored (or do not think, “Uh-oh, here comes the info dump.”)

In the case of of the “Welbourne Manor,” I do believe that at least the first anthology has to be read prior to reading the individual books. The individual stories can be read out-of-order if you so wish, but the anthology is a must, because everything gets set up there.

Congratulations on your book coming out, it looks to be a great read. It doesn’t matter if it is in a series or not, if the back cover catches my attention i have to read it.

I like to start at the beginning, but sometimes it doesn’t happpen. I don’t mind going back and reading earlier books afterward.

Congratulations on the new book! I often read books in a series out of order. Authors usually give enough information so that you don’t miss out on anything in the story.

Ongoing series may be read out of order unless there are relationships that build from book to book. This is more likely true if a series follows the same main characters (e.g., Eve and Roarke from Robb’s “In Death” or Elizabeth George’s Thomas Lynley mysteries) — if you don’t read them in order much of the richness is lost and you find yourself wondering why people react as they do, even if each book has a self-contained mystery which is enjoyable no matter what order they are read.

However, as Keira Soleore says, it is usually imperative to read the first book first because that is the foundation for all that comes after.

P.S. Besides the stories, “Welbourne Manor” has one of the prettiest romance covers ever.

I read series out of order all the time.

I prefer to read them in order, but I have unbeknownst picked up a book that was a middle or end of series book and still enjoyed it.

I’m so glad most of you don’t mind reading series out of order. Of course, I would hope you’ve already read all of the Diamonds of Welbourne Manor books.

I do agree with Keira, though. I think reading the anthology would enrich the reading of the other books, especially A Not So Respectable Gentleman.

But if you can’t get your hands on that book, look at my Behind the Book for the Diamonds of Welbourne Manor. It shows the family tree and that helps understand the relationships!
http://dianegaston.com/books/diamonds.php#behind

Yay!!! I can’t WAIT to see what happens to everyone 🙂

I would rather read a paranormal series in the order it was written because of the world building involved.

I have found myself picking up a book because the cover called to me, then the blurb on the back sealed the deal. Read the book, absolutely loved it. Only to discover it was number (fill in the blank) of a series. UGH!! Another series that must be read from the beginning because I loved the minor characters in the book!!!

I have to say, I usually have to read a series in order. If I discover a book I want to read and find out it’s part of a series, I usually track down the ones that came before and read them first. My husband will often find a movie on TV and just start watching it in the middle. I cannot do this. If I haven’t seen the movie yet, I need to start at the beginning. Anyway, this orderliness is undoubtedly good for authors as I generally read a whole series:)

Yes, I have to read all the earlier books first. If I don’t, it sometimes gets a bit confusing, and then once I read the book, I have to go and read from the beginning anyway. 😀

If a book is part of a series, I prefer to read the books as they are in order. Sometimes I end up with the last books first though.