The Colours of the Regency 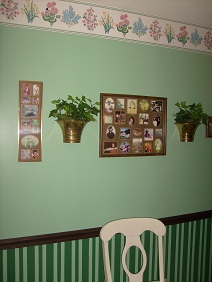 Last week, I had painters in sprucing up my kitchen, the master bathroom and the hall. I chose relatively quiet colors for the latter two. Pale blue for the bathroom to match the adjoining bedroom, a color I find very restful. A warm, slightly caramel cream for the halls, because I think a neutral color gives the eyes a resting place in between more colorful rooms. (My kids’ rooms are very colorful.)

I got bold with the kitchen. When we first bought the house, the walls were covered in a hideous 70s avocado green textured wallpaper that didn’t suit our Colonial style house. We got rid of that but then my husband and I couldn’t agree on what to do next. I found a botanical border that went well with the Portmeirion china we’d bought at the seconds shop in England and I wanted to paint the walls green, with stripes. Having been raised in a home that was all neutrals, I really wanted to try some color but my husband balked at so much green. We ended up using the border but leaving the walls white. It looked bland from the start and got worse over time. I do NOT recommend painting a kitchen white if you are a messy cook or have kids! Anyway, this summer I finally got my way and I’m very pleased with the result. 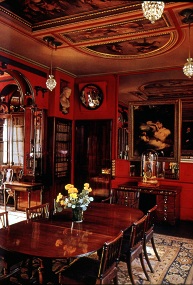 One of my favorite books on Regency décor, Regency Style by Steven Parissien has a chapter on “Colours and Coverings”. He writes that “In spite of the increasingly large number of colours available, however, one colour was predominant in the principal interiors of Regency Britain: red.” D. R. Hay, in his Laws of Harmonious Colouring wrote that ”a proper tint of crimson is the richest and most splendid colour for the walls of a room”. It was often used for dining rooms and was also considered “the best ground for pictures”. Here’s the famous red dining room designed by Sir John Soane. 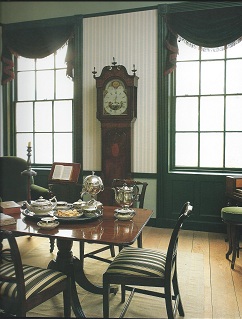 Green was also popular and much used in drawing rooms and libraries. Here’s a room I like very much: the Morning Room at Pickford’s House, a late Georgian house in Derby.

Bedrooms were supposed to be “light, clearing and cheerful” and were often blue, so my pale blue bedroom is very much in the Regency spirit. I also like the bedchamber below, from  Royal Crescent No.1 in Bath. 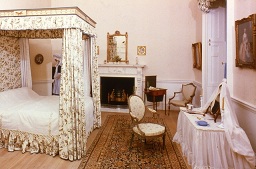 According to Parissien, yellow was controversial although it was sometimes used. ‘Drab’ colors (more subtle shadings of green, gold and brown) were also popular. Now, those sound like 70s colors to me!

So how about you? What are your favorite Regency colors or interiors? Which colors do you like best for decorating? Have you experimented with color, and how did it turn out?

I love the pale colors and plasterwork that Robert Adams used, Georgian not Regency, though.

I love your green kitchen! It’s a delight to know my pale blue bedroom is quite Regency proper. I love color. However, red is not one of my favorites. It’s gorgeous as an accent, but I find it very tiring to be surrounded by it. Someday, I want a teapot house, where every room in the house is a different color.

Diane, I love the Adam style. My dining and living rooms are in those colors. I do like the livelier color in the kitchen because it’s the hub of family life–unlike during the Regency.

Judy, I’m not generally into red either but I think it does look very festive in some of those formal dining rooms.

I love Adams’ work as well, O Divine One. I lean toward ivories, lavenders and pale, pale greens.

My kitchen is done to match my poster of Van Gogh’s Irises. I got the poster when I visited the Van Gogh Museum in Amsterdam and the whole room evokes lovely memories of that trip.

This article is really worth reading, it has too much details in it and yet it is so simple to understand, Thanks for sharing the picture it has great detail in it and i really appreciate your true artistic work!