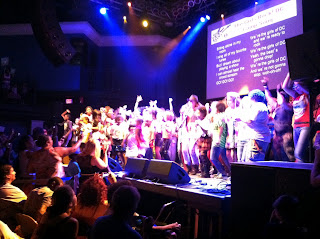 Last week my daughter volunteered at a summer program called Girls Rock. This is a terrific program for girls ages 8 to 18 where the goal is teaching self-confidence, empowerment, leadership, and team-building, all through teaching the girls how to play in their very own rock ‘n roll bands. Saturday was the culmination, a rock concert. The girls performed before, an enthusiastic crowd of friends, family, and my dh and me!

Eleven acts performed. Two were girl djs but the rest were “bands” who each performed songs that the girls had written themselves under the guidance of volunteers like my daughter. One of the popular rock ‘n roll venues in Washington, DC, the 9:30 Club, donated the space, so the girls could really feel like rock stars. It was a great, positive experience for all. As you can see by the photo. 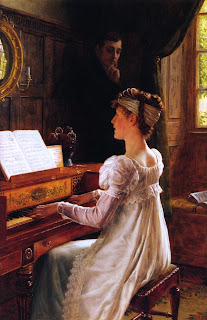 So I got to wondering…What was the equivalent in the Regency era?
Most aristocratic young ladies learned to play music, perhaps on the pianoforte or, like one of the Musgrove girls in Persuasion, the harp. And like Lizzie in Pride and Prejudice, they might be asked to perform at dinner parties and for the family.
I could conceive of a young peoples party where the young ladies, and perhaps some young gentlemen, as well, gather around the pianoforte and sing popular songs of the day. Or a family entertaining themselves in the evening in the same way.
I’m reasonably certain that learning to perform music in the Regency was not an exercise in self-empowerment or leadership, but very well might have been confidence and team-building.
In my fantasies, if I wasn’t a romance novelist, I’d love to be a torch singer in an upscale piano bar in New York City. In reality, I did perform in the chorus in musicals in community theater as a teenager. I even sang Pony Boy in my high school senior play.
I think there is something about performing music that is special. And I have to think that is true in any era.

What do you think?
Did you ever perform music? Did you feel special doing it?
Mariel Covendale in A Not So Respectable Gentleman? attends a musicale….I’m just saying. The book is out now!

I was in choir in high school. I even participated in Junior Miss, singing The Impossible Dream. They forgot to turn on the microphone. LOL! I did a few duets and solos in church and talent shows. The last was On My Own from Les Miz. Tolkien wrote a lot of songs he put in his books. It naturally follows, our LOTR group always enjoys group singing, some of the songs written by one of our members, who is truly gifted, and played by our members. Different members share their gifts, including bagpipes, penny whistle, ukulele, guitar, and piano. There is something about the power of music.

That sounds like a wonderful event!! What a great thing for those girls.

I sometimes think a Regency young lady’s day must have been kind of dull, but then I think about what I do in my time off and it’s much the same–read (a lot!), listen to music, gossip with friends, go for a walk, do a little cross-stitch. But I also load stuff into the washing machine and run the vacuum cleaner, which they didn’t do 🙂

Oh, Judy, what fun to have a LOTR group sing! I love singing in a group (another fantasy of mine) but then I never remember the words.

How awful that the microphone was not on for your BIG moment in high school. I also loved being in the high school chorus. We even went to some state competitions.

Amanda, I’ll bet a Regency miss didn’t have to clean out the kitty litter either!

Diane, I started choral singing in graduate school when I took my first music class. Since then, I’ve been singing off and on and also taking music lessons. Performing as part of a choir is so much more fun. It’s relaxing and allows you to focus on the audience.

Before vocal singing, I used to play the violin and it was all solo stuff. Oh, God. The neves! The sweating palms. The stomach cramps. I hated the performing, but I liked having performed. 🙂

As far as musicals go, when I was working full time, our company had a theater troupe, and I’ve done roles in Man of La Mancha, Mame, and one more (can’t remember).

I’ve been performing music since I was nine – first voice, then piano, then clarinet and bassoon. I sang in choirs, madrigal groups, jazz bands, marching and concert bands, orchestras and ultimately as a soloist with choirs and orchestras, as a recitalists and then as an opera singer. And even after all of those years I STILL get nervous. I don’t sing much anymore, but at the height of my opera career I was still a nervous wreck right up the point the orchestra struck up the overture. After that it was the music that carried me through. And it was incredibly empowering. And singing with an opera troupe creates a great sense of teamwork.

I do envy those Regency misses who had all the time in the world to practice the piano. I never did and therefore, in spite of years of lessons – three of them at the London College of Music – I never was more than a hack pianist. Imagine being a Regency miss and practicing for hours a day!

Keira! what fun to do choral singing. I think I’d love that.
I always wanted to learn to play a musical instrument. Let’s face it, I wanted to learn piano. And have ballet lessons. I didn’t get either one. But my daughter had piano and bass and guitar and voice lessons (hence she could help at Girls Rock)

Louisa, I love the career in opera that you had. I think that was an incredibly exciting thing to do. I feel sad that you don’t sing much anymore. I hope you sing around the house, though.

I was in a Lithuanian folk music group, playing a string instrument called “kankles” (something like a zither). We played at ethnic festivals and Lithuanian events and I loved it.

I used to play piano although I’ve never gotten particularly good at it. Would love to take it back up once I have time. For now, I live vicariously through my girls who are in school orchestra and also a Scottish fiddling group.

I enjoy musicals and my fantasy life would be as a musical star in movies and on Braodway.

In high school I was in choir and really enjoyed it. One of my summer jobs in college was working at an inn in Lake Placid, NY. Not only did we have to wait tables for 3 meals a day, 7 days a week, but we were told we had to put together a show for weekend entertainment for the guests. Three of us formed a folk singing group. It was the 60’s and Peter, Paul, and Mary were big. I have no idea if we were any good, but it was fun.