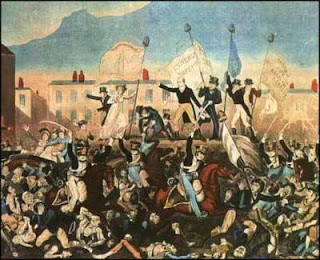 Today, August 16, is the anniversary of the Peterloo Massacre of 1816 when a peaceful meeting of people seeking reform of the Parliamentary system were attacked by the military, leaving eleven dead and over five hundred wounded. 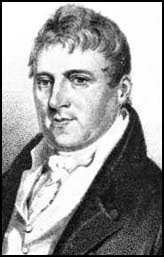 Organized by the Manchester Patriotic Union Society, a large crowd of millworkers from all over Lancashire gathered in St. Peters Field, Manchester that day–anywhere between 30,000 and 153,00, depending on which source you believe–to hear Henry “Orator” Hunt and others speak. It was apparently a glorious summer day and there was a holiday atmosphere, with people wearing their Sunday best.

Local magistrates, however, were convinced the meeting would become a riot, and had arranged for troop to stand by. They sent in the local militia, the Manchester and Salford Yeomanry, who attacked the cart that formed the speakers’ platform. The 15th Hussars were then sent in to “rescue” the Yeomanry and although at first people tried to stand their ground by linking hands, they were cut down and forced to flee–many were hurt by being trampled in the panic. The speakers and newspaper reporters were arrested and imprisoned. 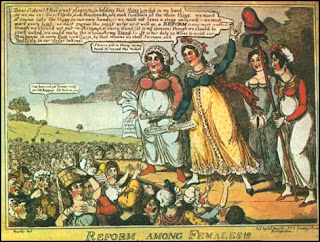 The woman in the white dress on the platform is thought to be Mary Hildes, a passionate radical who formed the Manchester Female Reform Group, and was one of the main speakers at Peterloo. She was also an early proponent of birth control and when she attempted to distribute books on the subject she was accused in the local press of selling pornography. The women radicals didn’t campaign, though, for female suffrage, but supported the male radical cause. They weren’t taken seriously by the press (of course. Note the dirty implications in the drawin, the kneejerk reaction of a Georgian cartoonists). They weren’t even taken seriously by other women. As The Times reported that day:

A group of women of Manchester, attracted by the crowd, came to the corner of the street where we had taken our post. They viewed the Oldham Female Reformers for some time with a look in which compassion and disgust was equally blended, and at last burst out into an indignant exclamation–“Go home to your families, and leave sike-like as these to your husbands and sons, who better understand them.” 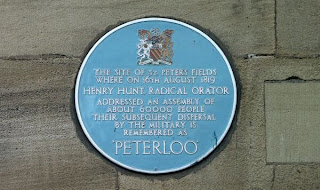 Many were outraged by the massacre, including local mill owners who witnessed it. James Wroe of the Manchester Observer was probably the first to call the massacre “Peterloo,” in ironic reference to Waterloo. The government supported the action of the troops, and by the end of the year had passed the infamous Six Acts that suppressed freedom of speech and of the press and made radical gatherings illegal. There wasn’t a public enquiry into Peterloo until 1820. It wasn’t until 1832 that the Reform Bill corrected some of the worst injustices of the electoral system and in 1918 all men, and women over 30, were given the vote. 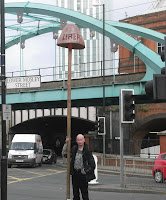 This is based on a post I did five–aargh, five years ago. There’s now a campaign  to get an official memorial to the Peterloo Massacre since it was such a significant part of Manchester’s history. Here’s a picture from their Facebook page taken today of a demonstrator on the site–you can see how it’s changed–holding aloft a liberty cap.

So what was the situation before 1832? About one in ten men could vote, because the right to vote was tied in to income and property and the areas represented ignored population shifts. Over sixty “Rotten Boroughs,” scarcely populated areas, or “Pocket Boroughs,” shoo-ins for local landowners were represented, but the huge industrial towns like Manchester were barely represented at all. Also voting was not done by ballot, so the few who could vote could easily be coerced or bribed. Middlemarch by George Eliot is set in this period.

I commented in 2007 that we don’t see too many books about the “real” history of the Regency but I think that’s changed. On the other hand we also seem to have more dukes to balance things out. How do you think things have changed in romance and in the fictional depiction of the Regency?

What a timely post! I’m editing a WIP set in 1816, outside of Manchester. Peterloo doesn’t change events in the story, but it’s good backstory to know. Thanks, Janet!

Thanks for this refresher, Janet!

I’m not sure how romance has changed. In contrast to books like Pam Rosenthal’s The Slightest Provocation there are all those dukes. But I don’t read as much as I’d like so I can’t really say. I just like variety, including books that explore the darker sides of the period.

My particular niche for Harlequin Historical is the Regency underworld, the grittier side of the Regency and I haven’t written a Duke yet.

So events like Peterloo and the unrest that spawned it, are the historical events that I love to have as a backdrop to my stories.

I’m not saying that there is anything not to like about the lighter Regency or Dukes, but it just isn’t what interests me to write about. I like to imagine characters set against that backdrop of drama.

I think both kinds of Regencies are thriving today, which is a good thing!!