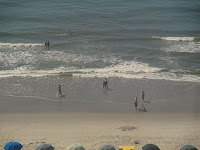 When my children were young, this was the time of year we would always spend a week at the beach. My In-laws then owned a condo at North Myrtle Beach, SC, and every year we would vacation there. It was a great condo, right on the beach, on the third floor and facing the ocean. It had three bedrooms and two full baths, plus a screened in balcony. We went there so many years that it felt like home and North Myrtle Beach was nearly as familiar as our neighborhood.

During the Regency, the Prince Regent also owned a “beach house.” His house was at the beach resort town of Brighton and he, too, “vacationed” there.

The Prince first visited Brighton in 1783 at aged twenty-one, in the company of his fast-living uncle, The Duke of Cumberland, partly to escape the constraints of his father’s court and partly for health reasons. His physicians thought sea-bathing would ease the swelling of glands of his neck. By 1786 he purchased a modest Brighton residence and shortly thereafter he hired Henry Hollard to build him a grander residence, a neo-classical structure with a central domed rotunda surrounded by Ionic columns. His residence was nearby the villa where he’d installed Mrs. Fitzherbert, his secret wife. 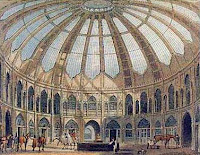 The Prince’s presence in Brighton was a boon to the town’s economy. Soon the fashionable world followed him to Brighton, and more elegant residences were built for them. Brighton remained the fashionable place for the elite to spend their summers. During these years the Prince hired architect P. F. Robinson to expand the beach house. He also purchased the land around what was named the Marine Pavilion. The stable he had built between 1803 and 1808, in the Indian style, soon dwarfed the pavilion. There was nothing to do but make his beach house even grander.

By this time (1815) the Prince had became Prince Regent, and he hired John Nash as the architect to redesign the exterior. The Prince Regent wanted the house built in an Indian style, like the stables. Nash had never traveled to India, but he was inspired by drawings in William and Thomas Daniell’s four volume Oriental Scenery and the result is the building as it appears today.

The interiors of the Pavilion were designed by Frederick Crace and Robert Jones and their rooms are a remarkable sight to see. I was lucky enough to visit the Royal Pavilion in 2003 and walked through those rooms. These images can’t quite do them justice. The house was completed in 1823. By that time the Prince had become King George IV.

The Royal Pavilion, in my opinion, is the perfect beach house, because it is decorated in a style you’d never live with at home. It just skirts the boundary between beautiful and tacky (but lands mostly on the beautiful side).

Amanda, remember that the Royal Pavilion does weddings! You could be married in the Grand Saloon and have your wedding sit-down in the dining room!! I’d so totally come for it!

Where is your favorite beach vacation? And do you think Amanda should be married in Brighton at the Royal Pavilion?

Belmont Beach in California. My friends take me whenever I’m there to listen to the waves shushing along the shore, and walk barefoot in the soft packed sand, with waves flowing over my feet…

The Royal Pavilion would certainly make the event unforgettable. 🙂

I have no idea what it would be like on a beach on the west coast!

I’ve also been to Jekyll Island, where it’s possible to make really cool dribble castles and the water is wonderfully warm. However, I wasn’t overly impressed with the jellyfish, though the sand dollars were cute.

Biloxi Beach. I have many fond memories of the beach in Biloxi. Haven’t been there since Katrina, but my friends tell me it is back in shape. There was a great German restaurant right on the beach and the summer I took Blizkrieg German our professor used to tell us to meet him in Biloxi at the restaurant for class at least once a week.

LOL! If we could persuade my parents to foot the bill for a Pavilion wedding we def would 🙂 They also do weddings at the Pump Room in Bath…

I could really use a beach vacation right about now

I’d so go to the Pump Room in Bath, too!

It’s hard to pick a favorite. On our honeymoon my husband and I snorkeled off a beach in Bermuda, where the sand is pinkish. We saw lots of fish including a gorgeous dark blue midnight parrotfish.

I think the Pump Room is more elegant for Amanda. If not that, then Versailles.

A beach house is a house on or near a beach, sometimes used as a vacation or second home for people who commute to the house on weekends or during vacation periods. Beach houses are often designed to weather the type of climate they are built in and the building materials and construction methods used in beach housing vary widely around the world.:

Most recent content produced by our own blog
<,http://www.caramoanpackage.com/caramoan-hotels/