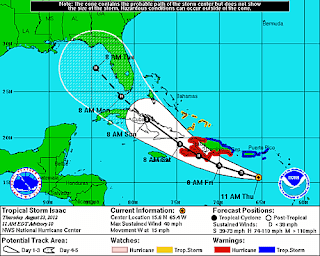 Today the news will be filled with weather reports, as we in the US discover if Tropical Storm Isaac turns into a hurricane and if it will hit New Orleans and the Gulf Coast, where Katrina did such devastating damage in 2005.

For my blog today, I went looking for extreme weather during the Regency period. And I found it! What amazing synchronicity.

Almost 198 years to this day, a storm figured in the burning of Washington, D.C. during the War of 1812.

On August 19, 1814, British warships sailed up the Patuxent River. The British army disembarked in Maryland and defeated the American forces at the Battle of Bladensburg.  The British marched on to Washington, D.C. on August 24, while government officials and residents fled the city, including, at the last minute, the First Lady, Dolley Madison, who rescued the Gilbert Stuart portrait of George Washington. 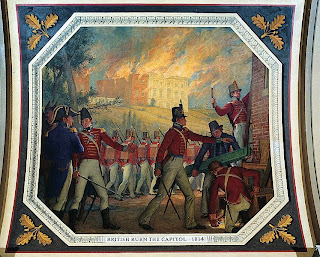 Unfortunately for the British, there were no representatives of government left in the nation’s capitol to surrender, so, after eating a dinner meant for Dolley Madison’s party in the White House, the British admiral gave the order to burn the public buildings of the city. The White House and Capitol were still burning on August 25 when a severe thunderstorm struck. It is thought that a  tornado tore through the city, catching the British troops by surprise. Several soldiers were killed in the storm’s destruction, and the storm stopped the further spread of the fire.

Afterward the admiral asked a Washington lady, “Great God, Madam! Is this the kind of storm to which you are accustomed in this infernal country?”

“No, sir,” the lady replied. “This is a special interposition of Providence to drive our enemies from our city.”

The British left hours later, returning to their ships, which had also suffered damage in the storm.

There is a more detailed account of the storm here.

Interesting note for those of us who love books. The Library of Congress which was then housed in the Capitol, was destroyed by the fire. One year later, Thomas Jefferson sold his personal library to Congress to replace the lost books. More about Jefferson’s library here.

Are you in Isaac’s path? If so, stay safe. Do you have any storm memories? I remember driving in every direction after Hurricane Agnes, looking for a way to get home that wasn’t blocked by water.

I’ll select yesterday’s winner after midnight tonight. So there is still time to comment on guest Laurel Hawkes’ blog for a chance to win.

If you are near Raleigh/Durham, NC, on Wednesday Aug 29, I’m going to be doing a reading from A Not So Respectable Gentleman? at Lady Jane’s Salon. I’d love to see some Risky readers there!

I like reading about the weather patterns from the Regency era. Fortunately, if Isaac swings northeast, it should only be rain by the time it reaches my area…if it does at all.

In your blog, there is what I’m sure is a typo…that should read: Almost 198 years to this day rather than 98 years.

Accck! I stared at that, thinking there was something wrong…I can’t do math!!! Thanks, Karen!

By the way, I’ll be in Raleigh, NC at Lady Jane’s salon on Weds Aug 29 (this Weds!) If you are nearby, I’d love to have you come.
http://ladyjanesrdu.blogspot.com/

My most memorable storm was the one when the lightning struck so close to the house it blew up the processor in my computer and fried my modem. LOL!

When I was very small, we drove through New Orleans after Camille had blown through. I remember looking at the houses along the beach where stairs lead to nothing and two-story homes with the top story missing. I also remember seeing the tugboat that landed on a man’s house, and he moved into the tugboat. Praying for those in the path of Isaac.

I’ve lived in hurricane country for some time now, the most I was ever impacted was in 1999, when Hurricane Floyd threatened Charleston, and it was evacuation central. I had a two month old baby, and we left to visit family. The trip was awful, it took us 8 hours to get out of South Carolina, and that was taking back roads, as opposed to the interstate, which was a parking lot for even longer.
It is awesome that you mention this, as I was just looking up possible hurricanes in 1811, when my heroine must cross the ocean in August to rescue her brother, and I was worried about whether she might cross paths with a bad storm. No worries, it was a quiet year storm wise.

Sounds like a nightmare, Kestrel.
One year a hurricane caused us to evacuate from the Outer Banks on vacation.
We went to Williamsburg where my in-laws are and took the kids to Busch Gardens. It worked out rather well–except for the evacuation part!!

I have LJS on my calendar. It will be my first visit and I’m looking forward to attending.

Karen H, be sure to introduce yourself to me. I’ll be looking for you!!!!

Ugh, too many storm memories. We had a major flood in our area in 2006 and another one, much worse, about a year ago. The area is still recovering. Fortunately my family and I were just stranded on top of our hill without power for about a week each time. But the devastation below was heartbreaking.