Oh no!!  It’s Tuesday, isn’t it?  I was completely sidetracked this morning by a cat swallowing something he should not have (though happily now all is well–he’s just cranky because of the trip to the vet, which he HATES).  To make up for my mistake, let’s have a giveaway!

I just got my author copies of my October Harlequin Historical release, The Tarnished Rose of the Court, which is a sequel to The Winter Queen.  I loved writing this one, because I got to take a peek inside the court of Mary Queen of Scots…. 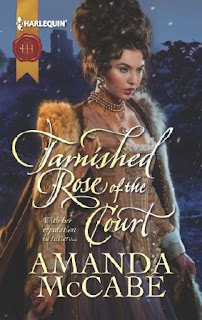 A dangerous mission at Queen Elizabeth’s bidding is Celia Sutton’s chance to erase the taint of her brother’s treason. Her life is at risk if she’s discovered—and so is her heart when she learns her co-conspirator is also her onetime seducer: brooding and mysterious John Brandon!

John can’t believe the change in Celia—what’s happened to the carefree English rose she once was? Leaving Celia was the only thing to do, but now guilt tears at his soul.

He has to heal the sadness in her past, and he’s not above using anything—from expert seduction to royal favors—to achieve his goal.

(It can be pre-ordered here, too…)


So, I’ll give away a copy to one commenter here today!  Tell me what you think about the cover, the setting, get-well wishes to my cat, anything….

Love the cover.. definitely something I want to read!!!

Your best yet!! Love it!

The cover is really great even though it is not as colorful as the norm. I really like it.

ILOVE the cover and have added the book on my TBR list!! How wonderful it would be to win a copy!! Thanks for the opportunity!

I so need a dress like that!! And the hair- awesome. Can’t wait to read it!

Awesome cover to what I am sure Is an awesome book!!!

I also love this cover! It’s not only beautiful (I want that dress–and wish I had that much hair LOL), it captures the feeling of the story so well…

I love the dress on the cover.

Congratulations on a gorgeous book!

That dress is to die for! Hmm. I have a lot of hair, but I’m not sure I could get it dressed like that. It would be worth trying! And commiserations on the cat eating something he shouldn’t! I have those sorts of adventures on a monthly basis. Hope he gets to feeling better and more amiable soon!

Hope kitty is doing well and learns not to swallow bad things.
I love the cover of The Tarnished Rose of the Court, it’s lovely and I’ve always enjoyed the era of Queen Elizabeth I.

Hope your kitty is feeling better.

The cover is beyond gorgeous, there’s something a little Liz Taylor about the model… she definitely looks like she’s up to something!
Spying and intrigue, sounds delish as well.
There is a reason for the saying, ‘curiosity killed the cat’, mine are always into stuff they shouldn’t be. Luckily you were able to make a vet trip and handle it quickly, whether kitty was happy about it or not!

I absolutely love the cover and I think it fits the title.

Cats usually aren’t the ones getting into trouble from what they eat, at least around here. It is usually the dogs, and our vet said house bunnies are really bad at chewing and eating things they shouldn’t.
The cover is rich. The height of her hair was a bit of a surprise, but I am sure it is accurate for the period. I guess I am just used to seeing it being white when put up like that.
Congratulations. I hope sales go well.

I like how the heroine is both fashionable but also has a strong, determined look on her face. It fits with the story 🙂 Great cover!

Cover definitely catches my attention and makes me think this is something unique. She’s a little frightening and alluring at the same time.

What a gorgeous cover. I love it. Thanks for the giveaway.

Hi Amanda! So sorry to hear about your kitty, but so glad things turned out well.

I really like the cover. It looks intriguing, and since it is a spy story, it will be.

Love the cover, but my first impressions of the lady and the hairstyle was she was a vampire. She just has that “I’m hungry and I’m on the hunt” look about her.