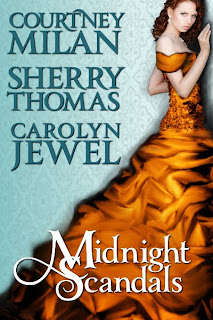 Courtney, Sherry and I talked among ourselves about what price to set and we agreed that we should price it so that someone who is only a fan of one of us will have the warm and fuzzies about reading the other two.

Welcome to Doyle’s Grange, a charming house near the hills of Exmoor, where the garden is beautiful in every season, and the residents are respectable year-round.

Except when the clock strikes midnight…

One Starlit Night – Carolyn Jewel
Ten years away from Doyle’s Grange isn’t quite long enough for Viscount Northword to forget Portia Temple, or their passionate adolescent affair. Portia, however, is about to marry another man. Northword tells himself it is wrong to interfere in her life at this late hour, but interfere he cannot help, with his words, his body, and the truths of his heart.

What Happened at Midnight – Courtney Milan
Fleeing the consequences of her father’s embezzlement, Mary Chartley takes a position as a lady’s companion, only to find herself a virtual prisoner at Doyle’s Grange, her employer’s house. And then the nightmare truly begins: the man she loves, who also happens to be the man from whom her father stole, shows up at her door seeking recompense. And not merely in pound sterling…

A Dance in Moonlight – Sherry Thomas
After losing her childhood sweetheart to another woman, Isabelle Englewood is heartsick. But then something remarkable happens: Upon arriving at Doyle’s Grange, her new home, she meets Ralston Fitzwilliam, who looks almost exactly like the man she cannot have. Come late at night, she tells him, so I can make love to you pretending that you are the one I love.

If your eReader does color, then I think you’ll be impressed because, again, we talked among ourselves and decided some use of color would be a good idea. Why not? Color is free on the internet and in your eReader. It’s a very limited use of color, but I swooned when we were proofreading the files on various devices. Gorgeous and elegant use of color with the title pages and chapter and scene break signifiers. It’s really, really pretty in color, but of course it looks nice in eInk, too!

If you read the anthology, I hope you enjoy it!

Thanks! I hope you enjoy the stories!

No colour on my Kindle, but am looking forward to reading it anyway 😉

Anthologies are a favorite. This sounds like a good one. I can’t wait to read it.