I’m recycling a post from a few years ago about Mary Shelley, whose birthday it is today. 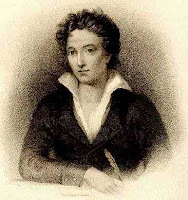 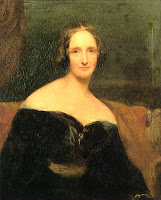 In the summer of 1816, Shelley, Mary, and Byron were in Switzerland and it was there, in response to a challenge to tell the best ghost story, Mary started to write Frankenstein. After Shelley’s death in 1822 she returned to England and supported herself as a writer until her death in 1851, penning short stories, essays, poems, and reviews, and several other novels.

I’m not doing justice at all to Mary’s adventurous, unconventional, and sad life, so I encourage you to read a book that does–Passion by Jude Morgan. It’s about the women who became entangled with Byron, Shelley, and Keats, beautifully written, and with a wonderfully strong sense of time and place. It’s also a very sad book–if you know anything at all about these people, you’ll know everything ended badly, particularly for the women.

In blatant self promotion, you can enter a contest at Goodreads to win a copy of Hidden Paradise, which recently got this wonderful review at Heroes and Heartbreakers. Go for it.

I am awfully fond of this comic about Mary Shelley: http://harkavagrant.com/index.php?id=56

This is brilliant! Thanks so much for letting us know about it.

I haven’t read anything about Mary Shelley, but I watched something the history channel. It was really sad after the death of her love.

Excellent post about one of my figures from Regency times. I loved Passion and was glad to see you recommend it. Now, more than ever I am eager to finally read Frankenstein.

BTW, so disappointed that William Godwin turned out to be such a hypocrite!

I’ve always had the feeling that Shelley thought ideas were more real than people. How else can you explain a man who tells his wife he is going to run off with another woman and asks her if she wants to come along?