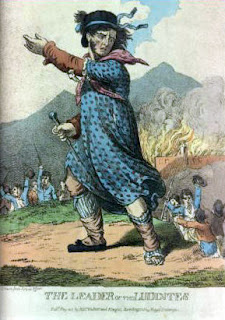 In the late 1800s several states celebrated Labor Day, but it was only after a number of workers were killed by U.S. military and U.S. marshals during a Pullman Strike, that congress made Labor Day a national holiday.

Worker unrest was not unusual during the Regency, of course. I’ll bet you’ve come across mention of the Luddites more than once when reading Regency-set historicals.

The Luddites were also protesting workers. They were English textile craftsman who protested by destroying the mechanized looms that were operated in factories by unskilled workers. Their name came from a young apprentice loom worker named Ludd or Ludham, who, when chastised by his superior, smashed his stocking frame with a hammer. Twenty-two years later, in 1811, Ned Ludd or Captain Ludd, or King Ludd, appeared in Nottingham, the leader of a protest. Soon he was reported to be on the move from one industrial center to the next, inspiring protesters, drilling secret armies at night, his face ghostly white, carrying a pike in his hand.

Problem was, Ned Ludd was a fiction. He was not a real person at all but a symbol. The officials believed in him; a militiaman reported actually seeing him. 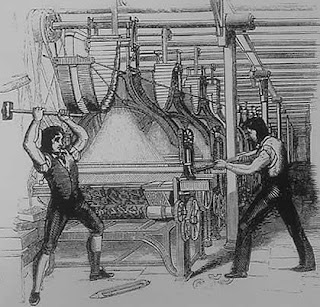 Besides having a fictional leader, the Luddites poked fun by producing officious-sounding dispatches. They invoked the name of Robin Hood in their quest for social justice. They also marched as “General Ludd’s wives”wearing women’s clothing.

The Luddites, though, were serious about their protests. Unlike how their name is used today, their complaints were not that the mill owners were replacing hand looms with more more advanced technology. The Luddites wanted those advanced machines to be run by skilled workers earning a fair wage, not unskilled, low-paid workers producing shoddy goods.

With some exceptions–the killing of a mill owner, for one–the Luddites confined their protests to damaging looms. Far more violence was inflicted upon the Luddites than they caused. Several were hanged, however, and more were transported to Australia. The last protest was in 1816.

Today when you are watching your parade or eating your hot dog, remember the Luddites and drink a toast to Ned Ludd!

My favorite activity would be resting–drinking tea and reading a book. Instead I am trying to work out the calendar for the upcoming year (correlating school activities, volunteer stuff, appointments, etc…so many conflicts I need to resolve!), generally cleaning up paperwork and the dreaded To Do List, trying to get ready for the girls to go back to school later this week.

Oh, I remember those days, Elena. How did I ever do them?

Our schools start tomorrow, but all I have to keep in mind is the change in traffic.

My favorite Labor Day Activity would have been sitting at home writing and reading.

My actual Labor Day activity involved making lots of garlic bread and cupcakes because that is all our customers bought at the bakery! Well, and cheesecake. Lots of cheesecake!

Washing windows and making garlic bread and cupcakes….not my idea of a great Labor Day, Janet and Louisa!

I had the laziest of days. It was glorious!